NEW YORK, Dec. 22, 2020 /PRNewswire/ -- Daniel Szalkiewicz & Associates, P.C. filed a new $50 million lawsuit against International Investigative Group (IIG) of Rockville Centre, NY, a firm run by TV polygraph expert and P.I. Dan Ribacoff. The lawsuit alleges that the polygraph expert from NBC's The Steve Wilkos Show and his family condoned, encouraged, and incentivized grossly inappropriate contact between their investigators and a female subject in order to retain a lucrative contract. 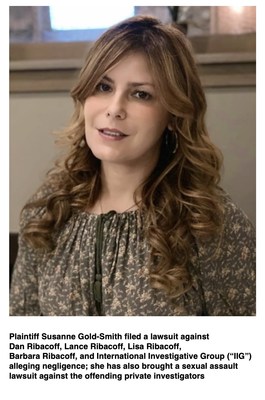 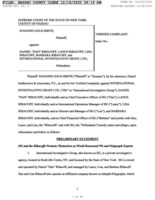 The Plaintiff and former subject of an IIG matrimonial investigation, Susanne Gold-Smith, alleges that Dan Ribacoff, together with his children Lance Ribacoff and Lisa Ribacoff, personally supervised and was aware of IIG's investigators' nefarious conduct.  According to the lawsuit, after months of surveillance failures, IIG resorted to desperate measures to control their subject.  As a result of their actions, the Ribacoffs fostered a toxic culture and permissive environment for sexual assault which ultimately led to Gold-Smith being raped by former NYPD Detective Yanti Mike Greene and New York State-licensed P.I. Richard Custodio, and sexually assaulted by former NYPD officers Tyrone a.k.a. Ty Dux and Fred Caravousanos as well as former Nassau County Police Officer Saul Roth.

The suit against IIG is based on troves of newly discovered and previously unknown text messages forensically recovered from investigator Yanti Mike Greene's iCloud account, which revealed that the Ribacoffs used investigators to overbill clients.  Text messages confirm that lead IIG investigator and former NYPD detective Yanti Mike Greene was frequently directed by the Ribacoffs to bill for hours he never worked in exchange for information obtained by inappropriately interacting with the subject. The suit alleges that other IIG investigators were rewarded for similar behavior.

According to the lawsuit, recovered text messages revealed that Greene, who played a central role in the investigation and carried out IIG's directives, received authorization from Dan Ribacoff to proceed with a plan to "shut down" a lawsuit Gold-Smith had filed against IIG in 2018; several weeks later, Greene raped and recorded Gold-Smith while she was incapacitated. The lawsuit alleges that Greene planned to use the nonconsensual video as leverage over Gold-Smith to drop her lawsuit against IIG.  As alleged, Greene attempted to destroy much of the recorded footage he shot during the rape to conceal his crimes, and a hearing for contempt has been ordered by the Court in the pending sexual assault lawsuit Gold-Smith filed against Greene in 2019.

Descriptions of some of the text messages uncovered with reference to location within complaint:

The complaint alleges that recovered text messages also revealed the Ribacoffs and IIG were engaged in fraudulent billing practices while conducting private investigative work for other high-profile clients, including the Church of Scientology in their surveillance of Leah Remini, and for Gillian Hearst, the granddaughter of Patty Hearst, in her custody case, among others.

"This was one of the most traumatic experiences I have ever endured.  It was already a challenging time in my life, and IIG and their investigators exploited the power dynamic they had over me during the investigation. I was powerless, and after I was raped and sexually assaulted by these investigators, I lived in a constant state of fear.  They made it clear that there would be repercussions if I ever exposed what they were doing. I'll have to live with that threat and the emotional toll this has taken on me for the rest of my life" said Gold-Smith.

The lawsuit alleges that IIG's negligence, lack of supervision, and fraudulent billing practices sent Gold-Smith's case into a free-for-all, with the investigators engaging in misconduct which included inappropriate relationships with Gold-Smith's friends and family members, frequenting strip clubs, soliciting prostitutes, using illegal drugs, and consuming hard liquor while on duty.

Although evidence indicates that the Ribacoffs directed investigators to delete incriminating communications regarding Gold-Smith's investigation, forensic experts were able to uncover almost 8,000 pages of relevant documents.  Much of the newly discovered information was concealed by IIG during Gold-Smith's previous and current lawsuits.

"If the tactics alleged in this complaint and confirmed by the text messages don't warrant the revocation of Defendants' private investigative licenses by the State of New York, I do not know what would.  While the Ribacoffs may have looked at Susanne's investigation as just another payday, our client will have to pay for their greed for the rest of her life" added Daniel Szalkiewicz, Gold-Smith's attorney.

International Investigative Group is licensed by the State of New York. The Plaintiff is suing for $50,000,000 in damages which include aiding and abetting her rapes and sexual assaults, negligent supervision and hiring, and infliction of emotional distress. A lawsuit is pending against the individual investigators accused of rape and sexual assault.