NEW ORLEANS, July 2, 2020 /PRNewswire/ -- PJ's Coffee of New Orleans (PJ's Coffee) has some big news brewing for our men and women in uniform. The brand recently launched a partnership with Sodexo, the world's leading provider of food services, to feature its coffee in select United States Marine Corps bases across the country, spanning from California to South Carolina. Military personnel can enjoy an array of coffee blends in 51 mess halls and 62 "brew stations," within nine bases. PJ's Coffee currently operates over 100 stores in 13 states in the U.S., and Vietnam and Kuwait. The company expects to open 35 to 40 new stores this year. 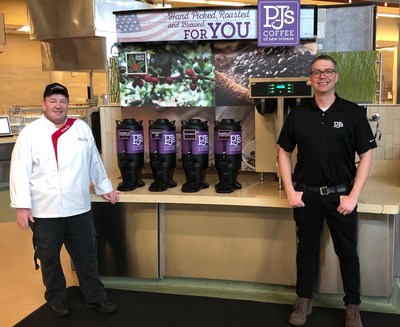 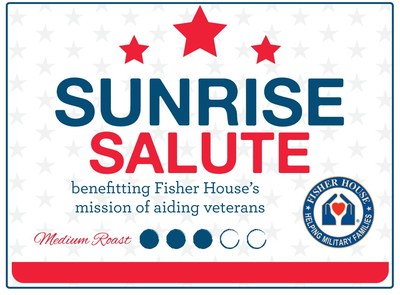 Continuing its support of our nation's active duty and veteran military members, PJ's Coffee is also launching a new blend: Sunrise Salute. The medium roast coffee blend will be available for purchase on www.pjscoffee.com. To show gratitude to active duty and veteran military members, PJ's Coffee has made a donation to Fisher House Foundation, a non-profit organization building comfort homes where military and veterans families can stay free of charge while a loved one is in the hospital. The donation will directly benefit the new Fisher House location that is currently being constructed in New Orleans, Louisiana.

"The PJ's family includes many U.S. veterans which makes this partnership with the Marine Corps that much more exciting for us," says Peter Boylan, President of PJ's Coffee and U.S. Army veteran. "We have a passion for supporting our military community and are thrilled that we can give a taste of our coffee to our brave men and women in uniform in conjunction with Sodexo's expertise in serving our troops in bases across the country."

"PJ's Coffee of New Orleans serves an outstanding product and we're proud to have them as our coffee partner in nine Marine Corps base camps," says Brett Ladd, CEO of Sodexo Government Services Division.

PJ's Coffee is an International Franchise Association VetFran member, proudly offering qualified veterans a 20 percent discount on the initial franchise fee. In 2017, PJ's Coffee launched an annual Veteran Franchise License Giveaway where one veteran is awarded a free franchise license. In its first year, PJ's Coffee received 117 applications from veterans around the country.  The program has been so successful, the brand has continued to award one veteran franchise license each year since inception.

About PJ's Coffee of New Orleans

PJ's Coffee of New Orleans was founded in 1978 by Phyllis Jordan, a pioneer in the coffee industry that demonstrated that better beans, superior roasting techniques, and pure passion for the art of coffee-making mattered. In 2008, the company was purchased by New Orleans natives and brothers, Paul, Steven and Scott Ballard. PJ's Coffee serves a wide variety of hot, iced and frozen coffee beverages using only the top 1% of Arabica beans, as well as organic tea and fresh breakfast pastries. PJ's Original Cold Brew™ Ice Coffee is brewed daily using a special cold-drip process that protects the flavor and strength of the beans, while producing a coffee that is 2/3 less acidic – a process and technique pioneered by our founder and used for more than 40 years at all PJ's locations. Bags of whole bean coffee, single serve cups of PJ's Coffee are available for sale in-store and online.

Sodexo North America is part of a global, Fortune 500 company with a presence in 72 countries. Sodexo is a leading provider of integrated food, facilities management and other services that enhance organizational performance, contribute to local communities and improve quality of life for millions of customers in corporate, education, healthcare, senior living, sports and leisure, government and other environments daily. The company employs 160,000 people at 13,000 sites in all 50 U.S. states and Canada, and indirectly supports tens of thousands of additional jobs through its annual purchases of $19 billion in goods and services from small to large businesses. Sodexo is committed to supporting diversity and inclusion and safety, while upholding the highest standards of corporate responsibility and ethical business conduct. In support of local communities across the U.S., in 2018, Sodexo contributed over 159,500 in volunteer hours, and since 1996, the Stop Hunger Foundation has contributed nearly $34.5 million to help feed children in America impacted by hunger. To learn more about Sodexo, visit us.sodexo.com, and connect with us on Facebook, Instagram, LinkedIn, Twitter and YouTube.

Fisher House Foundation is best known for its network of 87 comfort homes where military and veterans' families can stay at no cost while a loved one is receiving treatment.  These homes are located at major military and VA medical centers nationwide, and in Europe, close to the medical center or hospital they serve. Fisher Houses have up to 21 suites, with private bedrooms and baths.  Families share a common kitchen, laundry facilities, a warm dining room and an inviting living room.  Fisher House Foundation ensures that there is never a lodging fee.  Since inception, the program has saved military and veterans' families an estimated $500 million in out of pocket costs for lodging and transportation.

Fisher House Foundation also operates the Hero Miles Program, using donated frequent flyer miles to bring family members to the bedside of injured service members as well as the Hotels for Heroes program using donated hotel points to allow family members to stay at hotels near medical centers without charge.  The Foundation also manages a grant program that supports other military charities and scholarship funds for military children, spouses and children of fallen and disabled veterans.