SAN FRANCISCO, Dec. 7, 2020 /PRNewswire/ -- Postmates' fourth annual #BetterThanSanta is here, starting tonight at 5 pm PST, and in the spirit of giving, Postmates is again granting as many holiday wishes submitted through Twitter as possible. But this year, Grammy Award-winning artist Lil Nas X will be Postmates' first-ever Co-#BetterThanSanta as he trades in his cowboy hat for a Santa hat to help make people's wishes come true. Fans can also tune into Monday Night Football tonight to catch a special #BetterThanSanta message from Lil Nas X and Postmates. 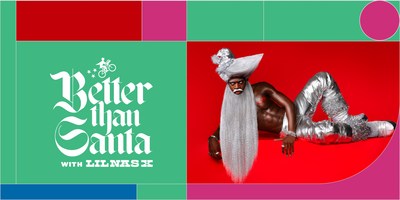 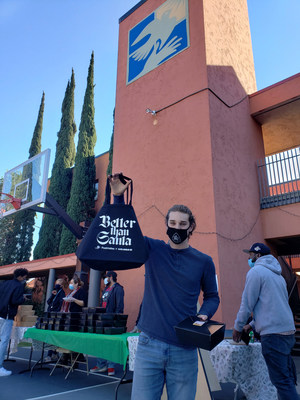 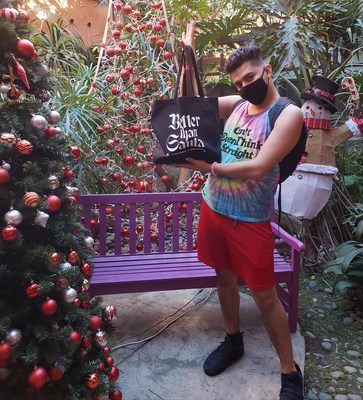 "Helping to bring joyful vibes to people this year is really important to me, and I'm super excited to join forces with Postmates to grant people's holiday wishes this year with #BetterThanSanta," said Lil Nas X. "We're kicking things off today by Postmating some lunch from Hotville Chicken to Covenant House LA. With everything going on in the world, it's important to me now more than ever to support the youth in my community."

"It is wonderful to be able to close out 2020 by delivering holiday joy with Lil Nas X," said Eric Edge, SVP Marketing and Communications at Postmates. "#BetterThanSanta is a favorite campaign at Postmates because, in real-time, we get to grant people's incredible, often heart-felt, wishes directed to family, friends and charities.

In addition to granting people's wishes with #BetterThanSanta, Lil Nas X is helping people get into the holiday spirit all season long with his hit song, "HOLIDAY," which has accumulated over 100 Million audio and video streams worldwide. The song was co-produced by Take A Daytrip and Tay Keith, and marks Lil Nas X's first offering from his forthcoming debut album. Nas has also released the song's cinematic and over-the-top official music video, which he co-directed with acclaimed director and creative Gibson Hazard. Set on Christmas Eve of the year 2220, the video follows Nas through his futuristic North Pole workshop where he takes on the role of four different characters, including Santa Nas X.

Like Lil Nas X, Postmates loves delivering joy for the holidays. Last year, so many people submitted wishes that #BetterThanSanta was trending on Twitter in the U.S. and Postmates granted all kinds of wishes including Lisa who asked for laptops to be sent to her sister, a teacher who needed them for her students. In 2019, celebrities also got wind of #BetterThanSanta including Miley Cyrus who asked to gift youth at the Happy Hippie Foundation with some goodies for the holidays and Carly Rae Jepsen who wished for Postmates to send books to kids at Children's Hospital in LA; and Postmates delivered on both and more.

This year, tweet your wildest wishes at Postmates and Lil Nas X here or just follow these directions:

*Tweeting your #BetterThanSanta wish to @Postmates and @LilNasX does not guarantee that your wish will be granted, but we'll promise to do our very best. Must have a valid Postmates account to receive a prize. Void where prohibited. Ends 12/10/2020 at 3:00pm PST. For full terms and conditions, see postmates.com/betterthansanta

About PostmatesPostmates is a leader in delivering your favorite restaurants and a whole lot more on-demand. The platform gives customers access to the most selection of merchants in the US with more than 600,000 restaurants and retailers available for delivery and pickup, many of which are exclusive to Postmates. The market leader in Los Angeles and markets across the southwest, Postmates covers 80% of US households, across all 50 states. Customers can get free delivery on all merchants by joining Postmates Unlimited, the industry's first subscription service. Learn more or start a delivery by downloading the app or visiting www.postmates.com.

About Lil Nas XLil Nas X is a Grammy award-winning rapper, singer and songwriter from Atlanta, Georgia. He rose to fame in 2019 when his genre-shattering hit song "Old Town Road" featuring Billy Ray Cyrus went viral and became the longest running #1 single in Billboard Hot 100 history. Dubbed "an internationally recognized phenomenon" by Billboard, Lil Nas X and the Diamond-certified song have been recognized with various major awards from several areas of the music industry, including two Grammys. He has been featured on the cover of TIME magazine (among many others), was named one of TIME's 25 most influential people on the Internet, one of Billboard's 21 Under 21, and was also included on Forbes' 2020 30 under 30 list. After releasing his highly-successful EP 7 in 2019, which features 5x Platinum single "Panini" and Platinum song "Rodeo," Lil Nas X is currently at work on his debut album. Follow Lil Nas X on Instagram and Twitter.

About Covenant HouseIn 31 cities across six countries, Covenant House builds a bridge to hope for young people facing homelessness and survivors of trafficking through unconditional love, absolute respect, and relentless support. Our doors are open 24/7 and our high-quality programs are designed to empower young people to rise and overcome adversity, today and in the future. For more information go to covenanthouse.org.

Postmates And Zaxby's Partner To Bring Your Favorite Fingerz...