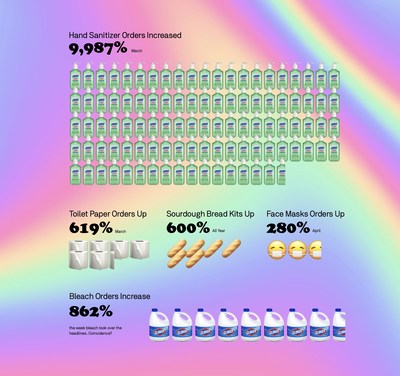 Postmates today revealed the unprecedented ordering trends of 2020 and it's clear 2020 was a year like no other.

The year started on a predictable note, with popular New Year's Eve hydration hangover remedies like Gatorade spiking 197% (WoW) on New Year's Day. Customers fell in love with heart-shaped pizzas this year (+1,800% YoY) on Valentine's Day where there was also a 4,462% (WoW) increase in orders for flowers - not too surprising. But in early March, as the global pandemic was declared and shelter-in-place orders began, on-demand orders for hand sanitizer spiked 9,987% (YoY) and toilet paper saw an increase of 619% (YoY); and that's just the beginning.

"To say 2020 was a year like no other is an understatement. From people's favorite restaurants to essentials like hand sanitizer and toilet paper, Postmates became the link between hundreds of thousands of businesses and people's homes," said Eric Edge, SVP Marketing and Communications at Postmates. "We are in awe of the creativity, generosity and hope people displayed this year and are  grateful for the heroes on the frontlines, including the Postmates fleet and our merchant partners, who continue to get us  what we need in unprecedented times."

Continuing to look at the early days of shelter-in-place, March saw spikes in several categories including office supplies which increased by 18.5% (MoM). On March 13, pet supplies saw a 57% (WoW) spike and it looks like a lot of customers are cat owners with cat food being the most ordered pet supply item. Gaming proved to be a popular way to pass the time as March saw a 77% (MoM) increase in gaming related orders including consoles like Playstation 4, Xbox One, and Nintendo Switch. Animal Crossing: New Horizons was popular on March 20, the game's release date.

March also saw impressive growth in customers sending Postmates gift cards with a 315% (YoY) increase this year. Customers began to show their thanks in tips with the average tip increasing as did the amount of thank you notes sent to the Postmates fleet.

April saw orders for face masks increase by 280% (YoY). Also in early April, one of the biggest pandemic food trends of the year -sourdough bread- was up 500% (YoY) and sourdough bread starter kits were up 600% (YoY)! The week of April 24, bleach took over the headlines and Postmates saw a 862% spike in orders. Coincidence?

Remember Friday nights out on the town? Not so much in 2020. On Friday, customers  kicked back on the couch and ordered dinner earlier. As events went virtual, like EDC: Las Vegas Virtual Rave-a-Thon in May, someone added more than 10,000 hot sauce packets to their order during the event. Things were getting weird.

Summer saw the biggest spike in party favors ordered during the pandemic for at-home birthdays and graduation celebrations in June. The #1 item ordered? Balloons. Around that time, our hair needed help and Postmates delivered 5X the amount of hair supplies (YoY).

From National Taco Day to National Pizza Day and all the National Food Days in between, which is the most popular? National Ice Cream Day on July 19. Another thing people love? Live sports which returned to TV and the most popular orders for game days? Pizza, Tacos and Chicken Wings.

What about adult beverages? Alcohol orders were popular and saw a 49% (YoY) increase this year and people ordered the most in April (+65% MoM). When looking at the most popular drink per season, Pinot Noir took the top spot in winter. Spring's favorite choice was light beer like Bud Light or Coors Light. Summer was caught in a tie between Sauvignon Blanc and White Claw Hard Seltzer (White Claw debuted as a top trend last year and is still in the game.)The most popular drink of Fall is red wine with an uptick in organic red wine orders.

Looks like a lot of people are turning to on-demand delivery for their holiday shopping needs. Ahead of the holiday season and with the launch of Shop on October 27, Postmates saw a 39% spike in retail orders (WoW). Halloween was just a few days later, and even though the number of trick-or-treaters decreased, the number of treats was still rising—38% more candy was ordered compared to last year.

For the first Presidential Debate people were mostly reaching for Chinese food in September but on Election Day the most popular items ordered were pizza, alcohol and desserts like cupcakes and ice cream. On Saturday, November 7, it looks like celebrations were in order with a +445% (WoW) surge for bubblies including Champagne and Prosecco.

A big part of Postmates' mission has always been to support local businesses and this year, that support was more important than ever. In April, with the companies' celebrity friends, Postmates launched a campaign to #OrderLocal and since then, has seen a 50% increase in orders  to local merchants. In June, it was equally important for Postmates to support and highlight Black-Owned businesses, and with the launch of the Black-Owned Restaurant collection, Postmates saw a 5x increase in orders to Black-Owned merchants.

Giving back was also an important focus in 2020 and by using the Postmates app, customers helped to support FoodFight!, Postmates' give-back initiative that allows the 31,221 restaurants in the program to request a pickup of excess food and have it delivered to a local shelter. This year, 188,293 meals (nearly 3x the amount in 2019) were delivered to agencies in 72 cities. Additionally, since partnering with Feed Hero Nurses in March, Postmates served more than 16,000 meals to frontline healthcare workers fighting COVID-19.

See the full list of 2020's ordering trends on Postmates' blog at https://postmates.com/blog and get a visual snapshot at https://Postmates2020.com.

To order contactless delivery, visit Postmates.com or download Postmates on iOS or Android. Customers pay zero delivery fees** when they subscribe to Postmates membership service, Postmates Unlimited, for $9.99 per month.

About PostmatesPostmates is a leader in delivering your favorite restaurants and a whole lot more on-demand. The platform gives customers access to the most selection of merchants in the US with more than 600,000 restaurants and retailers available for delivery and pickup, many of which are exclusive to Postmates. The market leader in Los Angeles and markets across the southwest, Postmates covers 80% of US households, across all 50 states. Customers can get free delivery on all merchants by joining Postmates Unlimited, the industry's first subscription service. Learn more or start a delivery by downloading the app or visiting www.postmates.com.