WASHINGTON, Aug. 27, 2018 /PRNewswire/ -- The world population will reach 9.9 billion by 2050, up 2.3 billion or 29 percent from an estimated 7.6 billion people now, according to projections by Population Reference Bureau (PRB) in its 2018 World Population Data Sheet released today. 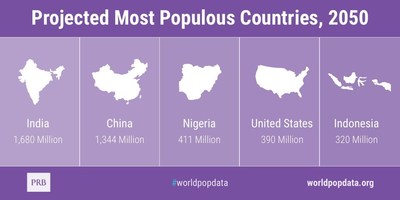 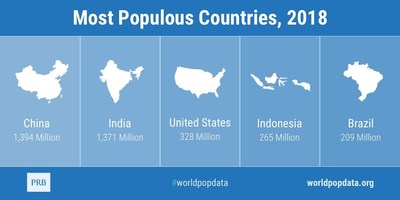 The world population will also continue to age over time, albeit with variations by country. By midcentury, 16 percent of the world population will be ages 65 and older, up from 9 percent now. The percentage of people in this age bracket in the world's more-developed countries will reach 27 percent, up from 18 percent now, while the percentage of adults ages 65 an older in less-developed countries will double to 14 percent.

Changing age structures—or the share of the total population in each age group—will influence countries' economic trajectories and how they allocate resources to ensure that all generations can thrive. These themes are explored in the 2018 Data Sheet's analytical features.

PRB estimates the 2018 worldwide total fertility rate (TFR, or average births per woman over their lifetime) at 2.4; the global TFR has been declining for the past few decades but it remains high enough to generate continued population growth. The three countries with the highest TFRs are Niger (7.2), Chad (6.4), and the Democratic Republic of the Congo (6.3), while the lowest TFRs are in South Korea (1.1), Singapore (1.2) and Taiwan (1.2).