WASHINGTON, Sept. 23, 2019 /PRNewswire/ -- Presidential candidate Ben Gleib joined the Democracy 911 protest Saturday at the U.S. Capitol to demand Congress and other presidential candidates take action against corruption from lobbyist money, secure our elections, and protect our right to vote.

Gleib joined activist Renaldo Pearson on the final mile of the march to the Capitol from Atlanta. Their arrests came when they refused to move from where they sat-in on the steps of the Capitol. 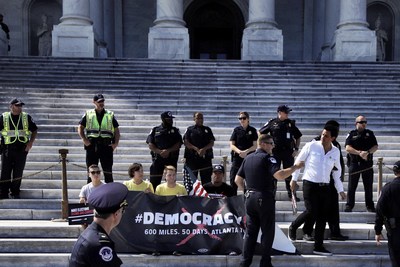 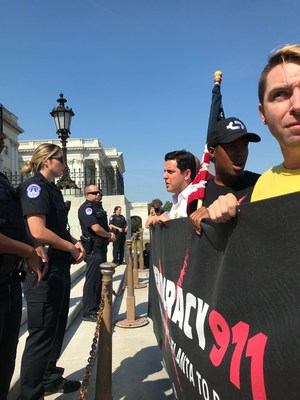 "I flew to DC to protest because we must get corruption out of our government. I was willing to be arrested because we are running out of time. The root cause of every crisis we face, stagnant wages, climate crisis, healthcare, gun violence, is because our politicians don't work for us. This is the main message of my campaign," Gleib said.

Gleib was arrested on misdemeanor charges.

It is not lost on us that Gleib, a comedian running for president, was arrested for protesting corruption while Donald Trump is being accused of corruption for inappropriate conversations with the newly elected comedian president of Ukraine.

Vertical (including speaking before arrest)http://TinyURL.com/DropboxDemocracy911B

To learn more about Ben Gleib's campaign for president: Gleib2020.com.

Ben Gleib is host of "Idiotest" (Netflix, Game Show Network), was a regular on Chelsea Lately, the TODAY Show, CNN, ABC News, and was creator of "Telethon for America"- a voter turnout event he partnered on with Michelle Obama's "When We All Vote" that helped create our historic 2018 midterm turnout. He announced his candidacy May 2019 and, according to most recent FEC filings, is the 19th highest fundraiser among active Democratic presidential candidates. He recently got a standing ovation speaking alongside every major candidate at the Iowa AFL-CIO convention. He's seeking to be added to the polls to qualify for DNC debates, so the American people can hear from all serious voices, since as a comedian he's offering a very different way to beat Trump. We don't believe the other campaigns have a good strategy, and we may repeat the loss of 2016.