ARLINGTON, Va., April 12, 2021 /PRNewswire/ -- Today, the Project on Fair Representation (POFR) released a White Paper urging states and sub-jurisdictions to use citizen voting age population rather than total population as the metric for redistricting U.S. election districts. The White Paper can be found at ProjectonFairRepresentation.org.

To counteract these harms, many have been advocating for States to replace total population with "citizen voting age population" (CVAP) as the basis of redistricting. CVAP is a long-established measure of eligible voters that is widely used by courts, the Department of Justice, and state and local governments. It leads to more equal representation by ensuring only eligible voters are counted—unlike total population, which creates significant disparities in voting power among eligible voters. CVAP also promotes good government by imposing a straightforward standard to apportion seats that significantly reduces opportunities to engage in race-based manipulation of districts and gerrymandering.

Additional studies and amicus briefs exploring this issue are attached.

The Project on Fair Representation is a nonprofit legal defense foundation based in Arlington, Virginia. The mission of POFR is to provide legal support to individuals and jurisdictions that wish to challenge governmental distinctions based on race and ethnicity. Established in 2005, POFR has provided counsel in many lawsuits, five of which were argued before the U.S. Supreme Court including Fisher v. Univ of Texas, Shelby Co. Ala. v Holder and Evenwel v Abbott.

SOURCE The Project on Fair Representation 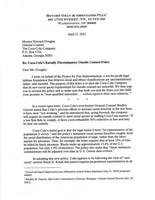