The law firm of Boyden Gray & Associates, a Washington D.C.-based litigation and public policy boutique, authored the letter. The letter is attached.

The current Coca-Cola company policy states that if a law firm fails to comply with meeting the quotas, it faces a non-refundable 30% reduction in fees and may be shut out entirely.

Coca-Cola's stated goal is that the legal teams it hires "be representative of the population it serves," and the policy's minimum racial quotas therefore roughly track the racial distribution of the American population at large, rather than the labor market for attorneys.

The abrupt departure last week of Bradley Gayton after less than a year as General Counsel suggests that Coca-Cola is already aware that its racial quota requirements on outside firms are indefensible. Coca-Cola should act swiftly to publicly undo this unfair, polarizing, and illegal policy. Without a public statement forthcoming from Coca-Cola reversing these quotas, it must be assumed that the policy is still in effect and legal challenges may be forthcoming.

Edward Blum, president of the Project on Fair Representation, said, "It is obvious to all observers that Coca-Cola's recently enacted law firm contracting policies are illegal. The company should publicly withdraw these racial quota requirements immediately."

The Project on Fair Representation is a nonprofit legal defense foundation based in Arlington, Virginia. The mission of POFR is to provide legal support to individuals and jurisdictions that wish to challenge governmental distinctions based on race and ethnicity. Established in 2005, POFR has provided counsel in dozens of lawsuits, five of which were argued before the U.S. Supreme Court including Fisher v. Univ of Texas, Shelby Co. Ala. v. Holder and Evenwel v. Abbott.

SOURCE The Project on Fair Representation 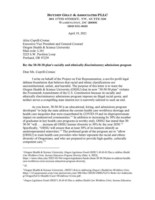 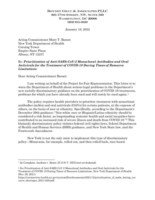