NEW YORK, June 6, 2017 /PRNewswire/ -- PwC today releases its 18th annual Global Entertainment and Media Outlook 2017-2021, an in-depth, five-year outlook for global consumer spending and advertising revenues directly related to entertainment and media (E&M) content. Rapid changes have created a gap between how consumers want to experience and pay for E&M and how companies produce and disseminate their offerings. E&M companies were accustomed to competing and creating differentiation primarily based on two dimensions: content and distribution. Now, they must focus more intensely on a third: user experience (UX). 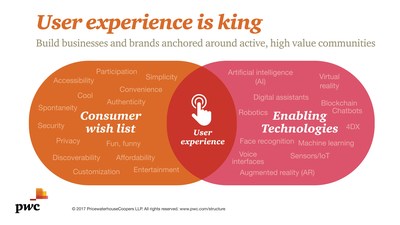 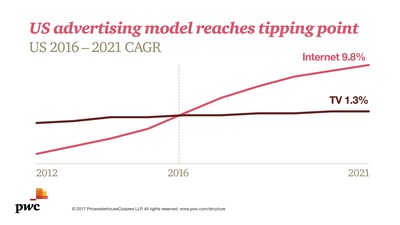 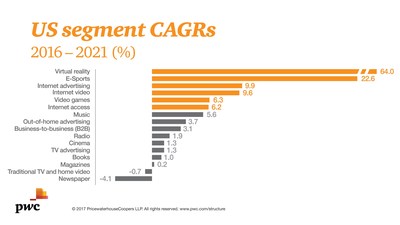 Global E&M revenues are expected to rise from $1.8 trillion in 2016 to $2.2 trillion in 2021 at a compound annual growth rate (CAGR) of 4.2 percent – down from the 4.4 percent CAGR the firm forecast last year. By comparison, PwC's 2017 Outlook expects U.S. E&M revenues to reach $759 billion by 2021, up from $635 billion in 2016, increasing at a CAGR of 3.6 percent – holding steady at the same CAGR as last year. While there are increases in revenue, E&M is approaching an industry plateau. Traditional, mature segments are in decline; the internet and digital E&M content is growing though at a slowing rate; and the next wave of content and entertainment is in areas, such as e-sports and virtual reality, which are just beginning to accelerate.

"E&M companies are operating amidst a wave of geopolitical turbulence, regulatory changes and technological disruption. Even if the macro context is set aside, these companies are facing significant pressures on growth," said Mark McCaffrey, PwC's U.S. Technology, Media, and Telecommunications Leader. "In order to thrive in the marketplace, PwC suggests that these companies understand and develop sustainable relationships with consumers to advance their UX. Pursuing a growth and investment strategy to enhance and differentiate the UX will help them flourish in an era where a changing value chain is slowing top-line growth from the traditional revenue streams that have nourished the E&M industry to date. Essentially, we've entered The Age of the Consumer. It's no longer sufficient to be 'consumer-centric,' one must be 'consumer-obsessed.'"

"The next era of differentiation in E&M is being defined and propelled by consumers' increased demand for live, immersive, sharable experiences. Consumers want to get closer, more engaged and better connected with the stories they love – both in the physical and digital worlds," said Deborah Bothun, PwC's Global Entertainment & Media Leader. "At the same time, companies can start to empower those experiences through a number of emerging technologies. Perhaps big data and artificial intelligence will create the most dramatic change, redefining how the industry can connect with all stakeholders and drive growth. We're already seeing a number of ways that AI is being used to personalize, customize and curate entertainment content and experiences at scale."

Key U.S. Entertainment & Media Highlights – A total of 68M Virtual Reality (NEW) headsets will be in use in the U.S. by 2021 with the installed base growing at a CAGR of 69.2 percent over the forecast period. In fact, the segment is projected to add nearly the same revenue as TV advertising between 2016 to 2021, a total of $4.6B. VR truly started to reach consumers in 2016 and has no legacy issues or false starts to look back on. The downside is a highly immature market with underdeveloped business models, flaky hardware, and lots of experimental or low-quality content. 2017 should at least see major advances in "inside out" movement tracking and lower cost headsets. It's worth noting VR's close relationship with the gaming market, yet many news and content organizations are pinning their hopes on VR to reinvigorate programming and recapture audiences lost to the internet.

Video Gaming continues to be a paradox: at once a large, growing business and yet a market where firms can fail in record time and new business models arise seemingly from nothing. It is this dynamism that both fascinates and concerns financial markets and partners in media, telco and IT spaces. Video games revenue was $21.0B in 2016 and is forecast to grow by a 6.3 percent CAGR to reach $28.5B in 2021.

The development of E-sports (NEW) has contributed to the video gaming boom. The nascent genre's revenue is forecast to reach $299M in 2021, from $108M in 2016, rising at a 22.6 percent CAGR. The U.S. is the largest market in revenue terms, having overtaken South Korea in 2015, although the latter will stay far ahead in terms of per-capita revenue. Not only does the ongoing popularization of competitive gaming by broadcasters bring new consumers into the gaming fold, but the games themselves help to boost online/microtransaction revenues on both consoles and PCs.

Data Consumption (NEW) is forecast to reach 290.7T MB by 2021, up from 117.9T MB in 2016 and representing a 19.8 percent CAGR. The U.S. will remain the largest market in the world in terms of data traffic in 2021, ahead of China despite the latter's faster growth. The single biggest driver of growth is the increased adoption of smartphones, and in particular the rise of video streaming on smartphones. Video represents 83.4 percent of all data traffic in 2016, ahead of other digital content (7.8%), and music (3.1%). By 2021, video will account for more than 247T MB of data in the U.S., some 85 percent of total traffic.

The U.S. Internet Video (NEW) market is by far the largest and most established in the world, accounting for 47 percent of global revenue in 2016. This percentage is expected to fall to 43 percent by 2021 as internet video becomes more established in others regions, although international growth will be driven by U.S. companies' expansion overseas. Internet video will grow at a 9.6 percent CAGR – the fourth largest U.S. E&M segment CAGR, following Virtual Reality, E-sports and Internet Advertising, respectively – to produce revenues of $18.8B in 2021. Nearly 75 percent of revenue at this time will be attributable to subscription video-on-demand (VOD) services, with transactional VOD platforms accounting for the remainder.

Internet Advertising revenue in the U.S. reached $72.5B in 2016, comfortably the largest market in the world. This figure is forecast to reach $116.2B in 2021, rising at a CAGR of 9.9 percent. While it was previously predicted that internet advertising would overtake TV advertising in 2017, the former actually surpassed the latter by the close of 2016. New tech innovations, especially around AI, will create both challenges and opportunities for incumbent players. The introduction of new screens, such as those in connected cars; the rollout of new content formats, like VR; and changes in the way we interact with technology, such as voice-activated search, create opportunities for new ways of engaging with and advertising to audiences. However, all require innovation and investment in order to meet their potential. Separately, the dominant force that is mobile advertising comprised 50.5 percent of total internet advertising revenue in 2016, rising from 34.7 percent the previous year and besting the contribution from wired internet advertising in the process. By 2021, PwC expects mobile to account for 74.4 percent of all U.S. internet advertising.

Cinema revenue will grow over the forecast period by a 1.3 percent CAGR. Specifically, box office revenue will rise from $10.6B in 2016 – the biggest box office year in all of American history – to $11.2B in 2021, a CAGR of 1.2 percent. PwC had expected China to overtake the U.S. in box office revenue in 2017, which would have marked this as the first time the U.S. has not held the leading position in an E&M segment. However, the second half of 2016 and the first half of 2017 were much softer at the Chinese box office than had been expected. That said, Chinese cinema revenue is still the most lucrative and the fastest-growing in the world. The big studio blockbusters remain the driving force, but the perennial debate about the three-month exclusive "window" for films in cinemas is intensifying – especially faced with intensifying competition from disruptors.

The Music industry has continued to turn the corner on nearly two decades of decline. The market was worth $17.2B in 2016. Total music revenue is forecast to increase at a 5.6 percent CAGR to reach $22.6B in 2021. The ongoing growth of digital music streaming – up an astonishing 99.1 percent year-over-year in 2016 to total $3B – was THE music story of last year as consumers turned in huge numbers to on-demand services. Competition for new subscribers will likely be fierce in 2017. In addition to the uptick in streaming, the live music sector continues to deliver, with fans appearing to have a nearly insatiable appetite for music events and festival brands eager to franchise overseas.

About the OutlookPwC's Global Entertainment and Media Outlook 2017-2021, the 18th annual edition, contains in-depth analysis and historical and forecast data for advertising and consumer/end-user spending in 17 major industry segments across 54 countries. Find out more at www.pwc.com/us/outlook.

MethodologyHistorical information is obtained principally from confidential and proprietary sources. PwC analyzes recent trends in industry performance and identifies factors underlying those trends. Models are then developed to quantify the impact of each factor on industry spending. Forecasts are also based on an analysis of the dynamics of each segment in each region and on the factors that affect those dynamics.

About PwC USAt PwC US, our purpose is to build trust in society and solve important problems. We're a network of firms in 157 countries with more than 223,000 people who are committed to delivering quality in assurance, advisory and tax services. Find out more and tell us what matters to you by visiting us at www.pwc.com/US.

© 2017 PwC. All rights reserved. PwC refers to the US member firm or one of its subsidiaries or affiliates, and may sometimes refer to the PwC network. Each member firm is a separate legal entity. Please see www.pwc.com/structure for further details.