ABU DHABI, March 11, 2019 /PRNewswire/ -- His Highness Sheikh Mohammed bin Rashid Al Maktoum, Vice President and Prime Minister of UAE and Ruler of Dubai, and His Highness Sheikh Mohamed bin Zayed Al Nahyan, Crown Prince of Abu Dhabi and Deputy Supreme Commander of the Armed Forces, led the opening ceremony of Qasr Al Watan - the nation's newest cultural landmark housed within the Presidential Palace compound in the capital Abu Dhabi. The inauguration ceremony was attended by Their Highnesses, Crown Princes and Deputy Rulers from the seven emirates, as well as ministers and senior officials. 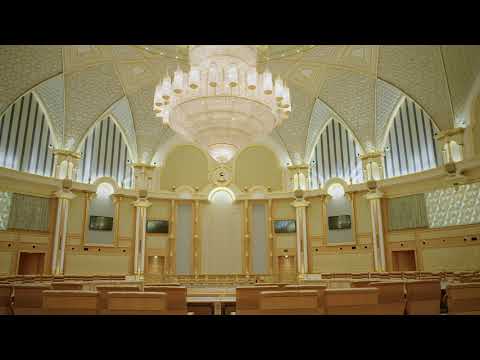 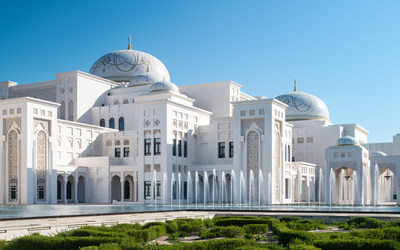 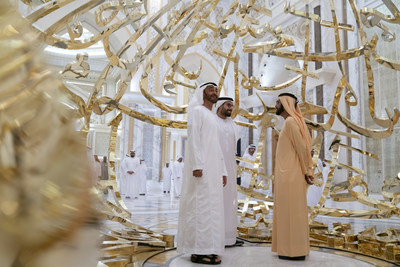 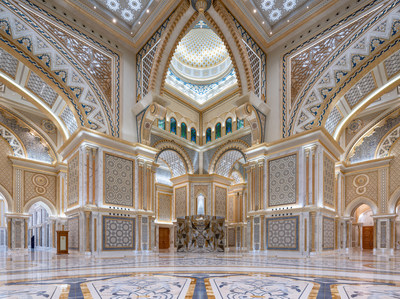 His Highness Sheikh Mohammed bin Rashid highlighted that the United Arab Emirates' cultural legacy is a precious asset that must be treasured by both present and future generations, and is driving the leadership's aspirations for a nation built upon the values of tolerance and coexistence. His Highness mentioned that the preservation of the UAE's cultural and intellectual legacy is integral to its progressive journey thus far, and that the opening of Qasr Al Watan reflects the leadership's dedication to fostering a strong connection between the community and their heritage.

His Highness Sheikh Mohamed bin Zayed reaffirmed the leadership's dedication to preserving the nation's cultural and intellectual legacy, underscoring its ability to empower and inspire future generations by instilling a deep sense of national pride. His Highness emphasised the importance of continuing the legacy of the late Sheikh Zayed bin Sultan Al Nahyan who sought to preserve the heritage of the UAE while encouraging cultural dialogue and openness.

Their Highnesses toured Qasr Al Watan and its iconic wings, and were introduced to exhibits that reflect the country's governing values and traditions, in addition to highlighting Arab contributions to various fields of knowledge.

The tour concluded with the 'Palace in Motion' – a remarkable light and sound show projected onto the façade of the iconic building. A story told in three acts; the show draws a link between the aspirations of Qasr Al Watan and the vision of the nation, reflecting on the UAE's journey of the past, present and future.

The opening of Qasr Al Watan is a testament of the leadership's role in shaping the future of the nation, in line with their ambition to develop national competencies – a core part of the Vision 2021 National Agenda, which aims to ensure sustainable growth for the country's economy across all sectors.

Qasr Al Watan visitors will gain a deeper understanding of the UAE's governing traditions and values, as they are invited to explore a well-preserved legacy of knowledge and tradition that has shaped the nation's journey.

Visitors to the UAE's newest tourist attraction will enjoy an enriching journey throughout their tour at the Palace, beginning at The Great Hall – the heart of the building. In the west wing of the Palace, they will learn about the formation of the UAE and its system of governance, and have access to halls typically reserved for official state guests such as the Spirit of Collaboration, a chamber where Federal Supreme Council and UAE Cabinet meetings as well as official summits are held. Visitors can also explore a collection of diplomatic gifts received from visiting Heads of State and foreign dignitaries, displayed to the public for the first time.

At Al Barza, visitors will learn about the traditional role of a Majlis (which means council or assembly) - a space for cultural, political and social gatherings - through an engaging multimedia show which sheds light on the continuation of a tradition historically followed by Emirati leaders to govern with the consensus of their people.

Continuing their journey to the House of Knowledge in the east wing of the Palace, visitors will have access to two rooms featuring rare artefacts, books, manuscripts and antiquities from the Arab world. Visitors will also be able to view key artefacts and historic maps that represent some of the earliest Arab contributions to human knowledge during the period of enlightenment referred to as the Arab Golden Age.

The Palace also houses the Qasr Al Watan Library where scholars can explore a vast collection of over 50,000 books and resources about the UAE and learn about the nation's progressive journey.

Qasr Al Watan will be open to the public seven days a week from 10:00 AM to 8:00 pm with tickets available for purchase from the Visitor Centre and online via the official Qasr Al Watan website www.QasrAlWatan.ae.

Qasr Al Watan in Abu Dhabi, capital of the United Arab Emirates, is housed in the Presidential Palace compound.

At Qasr Al Watan, visitors will have the opportunity to gain a deeper understanding of the UAE's governing traditions and values, and will be able to explore a well-preserved legacy of knowledge and tradition. The Palace also houses the Qasr Al Watan Library where scholars will be able to explore a vast collection of books and resources about the UAE's political, social and cultural history and learn about the nation's progressive journey.