SECAUCUS, N.J., Sept. 6, 2018 /PRNewswire/ -- More than half (52 percent) of Americans tested in 2017 misused their prescription drugs, the same rate as in 2016, but the epidemic is shifting beyond prescription opioids to encompass other drugs and dangerous drug combinations, finds a new Health Trends™ report released today by Quest Diagnostics (NYSE: DGX): Drug Misuse in America 2018. 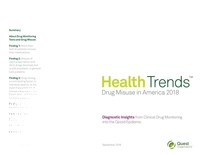 Based on 3.9 million de-identified test results performed for patients by Quest Diagnostics between 2011 and 2017, this report is believed to be the largest of its kind to provide current insights into prescription and illicit drug use and misuse in the United States based on laboratory insights.

"The majority of patients continue to show evidence of drug misuse, and this problem affects all age groups and both genders. When it comes to drug misuse, everyone is at risk," said lead author F. Leland McClure, PhD, MSci, F-ABFT, director, medical science liaison, medical affairs, Quest Diagnostics. "The overall rate of misuse did not change, but our data found significant shifts in the nature of the epidemic. We're encouraged by a decline in the use of non-prescribed opioids and other drugs among general care patients, but alarmed by sharp increases for certain drugs among patients in treatment for substance use disorders (SUD)."

Report reveals dangerous opioid-related drug combining The Health Trends report additionally found that drug mixing is the most common type of misuse. One in five (20 percent) test results showed potentially dangerous concurrent use of opioids and benzodiazepines in 2017. In almost two-thirds of these cases (64 percent), at least one of the drugs was not prescribed. Patients who were older and in Medicare were at heightened risk. These findings were presented at PAINWeek, a national conference held in September 2018 in Las Vegas.

In addition, the report found that mixing of heroin and fentanyl – a synthetic opioid that is 50 to 100 times more potent than morphine – is on the rise. Heroin and fentanyl belong to the opioid class of drugs, and combinations of the two can powerfully depress respiration. Among the patient test results that were positive for heroin, 83 percent were also positive for non-prescribed fentanyl, nearly double the rate in 2016 (45 percent).

"Quest's Drug Misuse in America 2018 report provides sobering data-driven insight into one of the most pressing health issues facing our country. It highlights the need for a sharper focus on patients with substance use disorders," commented Charles Neighbors, PhD, director of health services research for Center on Addiction, a nonprofit organization focused on improving the understanding, prevention and treatment of addiction. "The surge in heroin and non-prescribed fentanyl among this group is especially alarming, given its often deadly effect. Clearly more must be done to ensure this group of patients receives effective treatment."

Additional findings in the Health Trends report include:

"Our data suggests that some physicians and patients may be turning to alternative sources of pain relief, perhaps in response to mounting controls on opioid prescribing," said report co-author Jeffrey Gudin, MD, a medical advisor to Quest Diagnostics and director of pain and palliative care at Englewood Hospital and Medical Center, New Jersey. "This is a reminder that sharp restrictions on opioid prescribing alone will not solve the prescription drug epidemic. Until improved solutions emerge for treating chronic pain, better monitoring of patients taking prescription opioids and other potentially dangerous medications is essential."

The report's methodology, including the strengths and limitations of Quest data, is described in detail on page 16 of the report which is available for download at www.QuestPDMReport.com.

About Quest DiagnosticsQuest Diagnostics empowers people to take action to improve health outcomes. Derived from the world's largest database of clinical lab results, our diagnostic insights reveal new avenues to identify and treat disease, inspire healthy behaviors and improve healthcare management. Quest annually serves one in three adult Americans and half the physicians and hospitals in the United States, and our 45,000 employees understand that, in the right hands and with the right context, our diagnostic insights can inspire actions that transform lives. www.QuestDiagnostics.com