LAS VEGAS, Jan. 9, 2018 /PRNewswire/ -- (CES 2018) -- Razer™, the leading global lifestyle brand for gamers, today announced that Netflix will be supported in HDR and Dolby Digital Plus 5.1 on the Razer Phone. The Razer Phone now stands as the first smartphone to support both premium audio and video formats for Netflix. 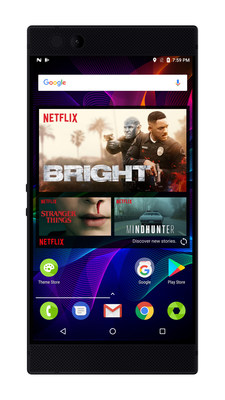 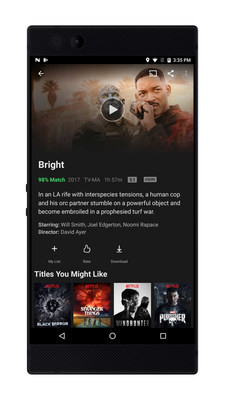 "We engineered the Razer Phone to handle HDR video and sound like no other phone on the market," says Min-Liang Tan, Razer co-founder and CEO. "We are incredibly excited to deliver Netflix entertainment on a smartphone like never before, enabling us to take full measure of the Razer Phone's HDR10-enabled display and dual-firing, front-facing Dolby-optimized speakers and THX-certified headphone connectivity."

The Dolby Digital Plus 5.1 support on the Razer Phone is a first for Netflix on a mobile phone. The designation is typically reserved for high-end entertainment systems and PCs. 5.1 is the most commonly used layout in home cinema. It exploits five full-bandwidth channels (the "five") and one low-frequency effects channel (the "point one"). 5.1 is also the standard surround sound audio component of digital broadcast and music.

"The Razer Phone brings an incredible Netflix viewing experience to the smartphone," says Anthony Park, vice president of engineering at Netflix. "We look forward to delivering this experience to our members around the world so they can watch their favorite entertainment on the go in the best possible quality."

Existing Razer Phone users will also benefit from the Netflix and Razer partnership with an over-the-air update later this month. This update will include the Netflix app and home screen widget for easy access, as well as firmware improvements to screen and sound to ensure a great Netflix experience. This update will come preloaded on all future Razer Phone releases.

Netflix members must be subscribed to the premium plan to watch in HDR, which includes titles like "Bright," "Stranger Things 2" and the entire Marvel series.

Razer™ is the world's leading lifestyle brand for gamers.

The triple-headed snake trademark of Razer is one of the most recognized logos in the global gaming and esports communities. With a fan base that spans every continent, the company has designed and built the world's largest gamer-focused ecosystem of hardware, software and services.

Razer services include Razer zGold, one of the world's largest virtual credit services for gamers, which allows gamers to purchase virtual goods and items from over 2,500 different games.

Founded in 2005 and dual-headquartered in San Francisco and Singapore, Razer has nine offices worldwide and is recognized as the leading brand for gamers in the USA, Europe and China. Razer is listed on the Hong Kong Stock Exchange (Stock Code: 1337).

Netflix is the world's leading internet entertainment service with over 109 million members in over 190 countries enjoying more than 140 million hours of TV shows and movies per day, including original series, documentaries and feature films. Members can watch as much as they want, anytime, anywhere, on nearly any internet-connected screen. Members can play, pause and resume watching, all without commercials or commitments.

Razer - For Gamers. By Gamers.™