HOUSTON, July 16, 2020 /PRNewswire/ -- Two award-winning master planned communities (MPCs) of The Howard Hughes Corporation® (NYSE: HHC)—Summerlin® in Las Vegas, NV, and Bridgeland® in the Greater Houston, TX area—marked the first half of 2020 by placing among the country's top ten best-selling MPCs, according to a report released by national real estate consultant RCLCO. Summerlin is ranked #4 on the list, and is the highest-ranked MPC in Nevada. At #10 on the list, Bridgeland remains the highest-ranked MPC in in Texas. 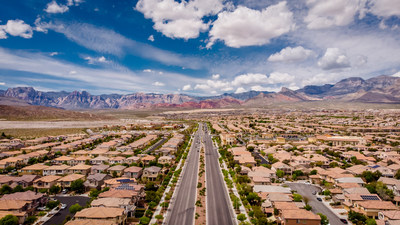 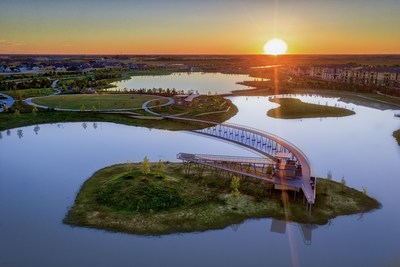 "As the developer and largest single real estate owner within our communities, our company has the unique ability to provide the characteristics of an outstanding lifestyle that people and companies are seeking—urban amenities within natural, suburban settings with enviable ratios of open green space," said Paul Layne, CEO of The Howard Hughes Corporation. "Our overall home sales in our MPCs for 2020 year-to-date as of June 30 show an increase over the same period for 2019 across our MPCs in the Houston Region and in Summerlin—which is truly a testament to the exceptional quality of our communities. While new home sales do not directly impact our company's financial results, we view it is a good leading indicator of market demand for land sales in our MPCs."

SummerlinRanked #4 on the list of best-selling MPCs, Summerlin is the only MPC in Nevada to place in the list's top five, with 642 new home sales for 2020 as of June 30. Despite the economic impact that COVID-19 had on the region, new home sales in Summerlin were down only five percent—only 33 homes—for the first half of 2020 as compared to the same period last year.

"This newest 2020 mid–year report speaks volumes about Summerlin's remarkable and enduring success as our community leads new home sales in Southern Nevada during our 30th year of development," said Kevin T. Orrock, President, Las Vegas Region for The Howard Hughes Corporation, citing the RCLCO report. "This is a remarkable achievement and the strong ongoing consumer demand reflects the tremendous value and appeal that our community of Summerlin offers."

According to Gregg Logan, managing director, RCLCO, Summerlin has consistently appeared on the list since RCLCO first began tracking MPC sales. Summerlin has appeared on the annual list 22 times, not counting mid-year rankings. Summerlin has ranked among the ten top-selling MPCs in the country for 19 of those appearances, including an impressive run at the #1 spot seven times from 1997 to 2003. "That puts Summerlin in the company of only a handful of communities nationwide that have enjoyed remarkable and sustained sales success over decades," said Logan.

While The Howard Hughes Corporation anticipates strong sales to continue throughout 2020, the company is particularly excited about the continuing evolution of Downtown Summerlin®, the community's urban core, as well as new and future development in Summerlin West, the area of the community west of the 215 Beltway. According to Orrock, Summerlin West will be home to the community's most diverse offering of homes to date, including a greater inventory of more-accessibly-priced homes with smaller footprints to meet growing consumer demand.

BridgelandFollowing a record-breaking 425 new home sales for 2020 as of June 30, Bridgeland enters the coveted top ten on the RCLCO national list for the first time, remaining the highest-ranked MPC in the Greater Houston area and the state of Texas.

"Homebuyers are looking for communities that offer open spaces and access to nature, two elements that promote health and wellness and are valued now more than ever," said Health Melton, Executive Vice President of Master Planned Communities, Residential for The Howard Hughes Corporation, citing the RCLCO report. "Our high-performing schools, unmatched amenities, award-winning parks, and our commitment to integrating the natural landscape into community design collectively make for a winning formula for growth."

Bridgeland moved up from the number 12 spot in the previous RCLCO year-end report in 2019. The master planned community expects to continue the trend of growth with Prairieland, the third of its four planned villages, coming online next year to join Parkland Village® and Lakeland Village®. Prairieland will expand the community west of the thriving Grand Parkway sector in northwest Houston.

"We are extremely proud of the efforts of Bridgeland and The Howard Hughes Corporation team to position the community for success," said Jim Carman, President of the Houston Region for The Howard Hughes Corporation. "The newest mid-year report shows the value and quality Bridgeland offers to families living in or moving to the Greater Houston area."

About Summerlin® Developed by The Howard Hughes Corporation®, Summerlin began to take shape in 1990 and has ranked in the country's top 10 best-selling master-planned communities for nearly two decades. Located along the western rim of the Las Vegas valley, Summerlin encompasses 22,500 acres with approximately 6,000 gross acres still remaining to accommodate future growth, including infrastructure, open space and common areas, all within the master plan. The community is currently home to nearly 100,000 residents who enjoy an unparalleled list of amenities. These include more than 250 neighborhood and village parks, more than 150 completed miles of trails, 27 public and private schools, 14 houses of worship, ten golf courses, shopping centers, medical and cultural facilities, business parks and dozens of actively selling floor plans. Homes are available in a variety of styles—from single-family homes to townhomes—priced from the $300,000s to more than $2.5 million. For information on custom homesites in The Ridges please call 702.255.2500. Luxury apartment homes offer monthly rents starting from the $900s. Visit www.summerlin.com for more information.

About Bridgeland®Bridgeland is an 11,400-acre master planned community located in Cypress, Texas and is ranked as the top-selling master planned community in Houston and number 12 in the nation. The award-winning development opened in 2006 and offers a wide variety of housing options and extensive outdoor amenities, with a strong emphasis on conserving and enhancing the natural environment. Bridgeland has over 3,000 acres dedicated to lakes, trails and parks, and offers resort-style pools, disc-golf course, stocked lakes and complimentary use of kayaks, paddle boats and other recreational equipment for residents. Lakeland Village Center® is the first of four retail centers in Bridgeland, with additional plans for Bridgeland Central, a 900-acre future town center, along Grand Parkway, which intersects the community. Bridgeland is a development of The Howard Hughes Corporation®.

Safe Harbor StatementStatements made in this press release that are not historical facts, including statements accompanied by words such as "will," "believe," "expect," "enables," "realize", "plan," "intend," "assume," "transform" and other words of similar expression, are forward-looking statements within the meaning of the Private Securities Litigation Reform Act of 1995. These statements are based on management's expectations, estimates, assumptions, and projections as of the date of this release and are not guarantees of future performance. Actual results may differ materially from those expressed or implied in these statements. Factors that could cause actual results to differ materially are set forth as risk factors in The Howard Hughes Corporation's filings with the Securities and Exchange Commission, including its Quarterly and Annual Reports. The Howard Hughes Corporation cautions you not to place undue reliance on the forward-looking statements contained in this release. The Howard Hughes Corporation does not undertake any obligation to publicly update or revise any forward-looking statements to reflect future events, information or circumstances that arise after the date of this release.

THE HOWARD HUGHES CORPORATION® PARTNERS WITH PROJECT DESTINED TO...