NUJIANG LISU AUTONOMOUS PREFECTURE, China, June 4, 2021 /PRNewswire/ -- This is a report from China SCIO about how a remote village in China's southwestern Yunnan province transforms into a tourism hotspot:

During the early 2000s, life in Laomudeng was difficult. There was no cement-paved road, no internet, and very few job opportunities.

Over two decades since then, the remote village of the Nu ethnic group in Nujiang of Yunnan province, has seen a dramatic transformation, turning into a popular tourist destination that attracts tens of thousands of visitors annually.

The key to its success has been its location: Laomudeng sits nestled on a chair-shaped hillside of Biluo Snow Mountain overlooking the Nujiang River, and is considered one of the most beautiful villages in China.

In 2004, Ya Zhen, a local noodles vendor, put up six college students who visited the village, charging 60 yuan (about US$9.41) in total for their food and accommodation. The sum, she said, was equivalent to 120 bowls of cold noodles priced at 0.5 yuan per bowl.

Ya saw the value of her prime real estate. It has a front-row seat to the Crown Mountain, one of the most popular destinations in the area.

To accommodate more visitors and improve services, she decided to refurnish her house in 2015.

Her idea was considered risky by other villagers at a time when income was meager. Her relatives, she said, were willing to lend her money but reluctant to join her business.

With a startup fund of 90,000 yuan from the local women's federation, Ya's house was turned into a romantic sanctuary for people who were cooped up in the city and wanted good, clean food and fresh air.

The inn is cradled in a flower garden that she planted, with a terrace offering a panoramic view of the Crown Mountain. Rooms are complete with shower, Wi-Fi, and other modern amenities.

She named the new inn "Sisters' Flowers." As the name suggests, it is run by Ya and her younger sister, both of whom love flowers.

Ya welcomes her guests wearing traditional Nu ethnic costumes, and treats them with delicious local dishes cooked from vegetables gathered from nearby fields. Often, she also sings folk songs for them.

Her guesthouse became very popular through the word of mouth, and now regularly receives guests from big cities like Shanghai and Beijing.

Ya said she plans to expand her house and redecorate rooms to accommodate guests.

She also did not stopped with her own success. She has helped others in the village to run guesthouses and referred guests to them. During the five-day May Day holiday this year, she received many groups of more than 50 tourists. With her inn's capacity overstretched, she introduced them to other inns in the village.

Benefitting from policy support and improvement in facilities, Laomudeng is thriving on tourism. In 2019, the village received more than 50,000 tourists, raking in more than 3 million yuan (US$430,000).

Guesthouses in the village can offer about 400 beds, and create more than 100 local jobs, quadrupling villagers' annual average income from a decade ago.

"My biggest wish is to live a happy life along with my fellow villagers," the 50-year-old woman said. 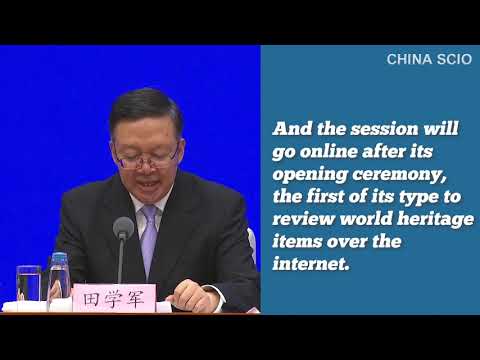 44th session of World Heritage Committee to open in Fuzhou...