MINNEAPOLIS, Dec. 24, 2013 /PRNewswire/ -- The ResCap Liquidating Trust announced today that it expects to make an initial distribution of Units of beneficial interest in the Trust and cash on or about Friday, December 27, 2013 to holders of allowed general unsecured claims in the ResCap bankruptcy case who have timely provided their brokerage information necessary to receive the Units and cash.  The  Second Amended Joint Chapter 11 Plan of Residential Capital, LLC et al. was declared effective by the Bankruptcy Court on December 17, 2013.

Distributions of Units will be made in the following ratios:

Based on the reserve order issued by the Bankruptcy Court, the Trust will allocate 3,619,088 Units to the Disputed Claims Reserve, which is being established for holders of currently disputed claims that may be allowed in the future.

The Trust will make an initial distribution of cash on or about December 27, 2013 of $17.65 per Unit.  The cash actually received by claim holders may depend on expense deductions for their fiduciaries or professionals.

For a claim holder to receive the Units to which it is entitled under the Plan, the broker, bank or other nominee of the claim holder must initiate a DWAC transfer in accordance with the procedures of the Depository Trust Company (DTC) for the number of Units previously communicated to the nominee by the Trust.  After the transfer of Units to the DTC participant account of the nominee has been confirmed, the corresponding cash distribution will be paid by wire transfer to the account of the nominee (or in certain cases, as otherwise instructed by the claim holder).  The transfer of the Units and the cash distribution will be made by Continental Stock Transfer, the transfer agent and registrar for the Trust.

About the ResCap Liquidating Trust

The ResCap Liquidating Trust was established under the Second Amended Joint Chapter 11 Plan of Residential Capital, LLC et al. for the purpose of liquidating and distributing the assets of the debtors in the ResCap bankruptcy case. 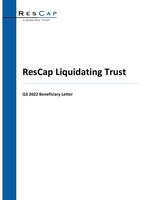 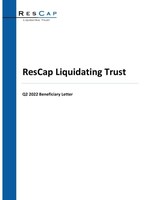