CORPUS CHRISTI, Texas, May 13, 2021 /PRNewswire/ -- On May 12, 2021, the Corpus Christi Bar Association (CCBA) named Robert C. Hilliard "Lawyer of the Year" for his relentless pursuit of justice. Hilliard, owner and founder of Hilliard Martinez Gonzales, LLP, has spent nearly 40 years practicing law in Corpus Christi, dedicating his life and career to standing up for others no matter the odds or the backlash, and is often the first to speak when others are silent. 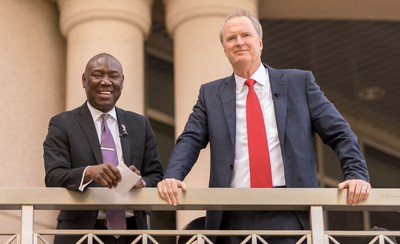 The Law Day event hosted by the CCBA at the Solomon P. Ortiz Center, featured keynote speaker and renowned civil rights attorney Ben Crump.  Hilliard introduced Mr. Crump, noting that while Ben Crump has been called the "Black Man's Attorney General" he is really "Everyman's Attorney General" as he fights for equality and to eradicate injustice.  After congratulating Hilliard for receiving this award, Ben Crump reiterated his message of speaking truth to power, and that influence means nothing if you don't speak up for the marginalized who don't have a voice.

Working together, Hilliard and Crump have embodied this philosophy, seeking justice in numerous difficult cases. The duo represented Danny Ray Thomas, an unarmed black man who was shot by sheriff's deputies in Houston.  They also represented Zeke Upshaw, an NBA player who died after his heart stopped in the middle of a basketball game.  They are also currently challenging racial discrimination in the banking industry, representing numerous individuals against major banks who experience the phenomenon "banking while black" which includes discriminatory actions such as being unable to cash checks, withdraw money and difficulties obtaining mortgages and loans.

Bob Hilliard is the first recipient of the Corpus Christi Bar Association's "Lawyer of the Year Award."

Mr. Hilliard states: "A Corpus Christi court room was the first time, as a very young lawyer almost 40 years ago, I ever stood up and said: 'Plaintiffs are ready your Honor.'  My first jury trial. Now, with over a hundred trials all over the country behind me, I consider how fortunate I am.  This is my home city, a city I love. It is where I met the love of my life, my wife, Catherine. This legal community, its lawyers and judges, are my lifelong friends. I am humbled and honored to be selected as the Corpus Christi Bar Association's first ever Lawyer of the Year by my peers. Even more so given my friend Ben Crump was here as well to inspire all of us."

About Hilliard Martinez Gonzales, LLP   Hilliard Martinez Gonzales LLP (HMG) specializes in mass torts, personal injury, product liability, commercial and business litigation, and wrongful death. HMG has been successfully representing clients in the United States and Mexico since 1986. Our experienced, tenacious legal team has earned a national and international reputation for taking on large, powerful, wealthy companies and bringing them to justice for causing personal injury or wrongful death. Bob Hilliard obtained the Largest Verdict in the country in 2012 and the #1 verdict in Texas.