LAS VEGAS, June 15, 2021 /PRNewswire/ -- Legendary Rockstar Rod Stewart will celebrate the 10th anniversary of his acclaimed residency "Rod Stewart: The Hits." at The Colosseum at Caesars Palace when he returns to Las Vegas for nine shows this fall. Presented in partnership by Caesars Entertainment and Live Nation Las Vegas, "Rod Stewart: The Hits." will perform select dates October 6 through 23, 2021. 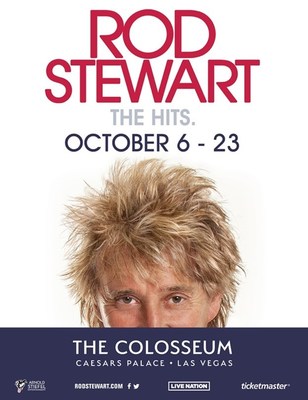 Over the past ten years, the two-time Rock and Roll Hall of Fame inductee has packed an arena-sized concert into an intimate concert experience that's exclusive to Las Vegas audiences - with no seat more than 145 feet from his majestic stage. Featuring chart-topping hits spanning Stewart's unparalleled over five-decade career including "You Wear It Well," "Maggie May," "Da Ya Think I'm Sexy," "The First Cut is the Deepest," "Tonight's the Night" and "Forever Young," the high-energy show treats audiences to an intimate, concert celebration.

In addition, Caesars Rewards members, Caesars Entertainment's loyalty program, as well as Live Nation customers will have access to a presale running Thursday, June 17 from 10 a.m. PT through Friday, June 18 at 10 p.m. PT.

Tickets go on sale to the general public starting Saturday, June 19 at 10 a.m. PT. Ticket prices for "Rod Stewart: The Hits." start at $49, plus tax and fees, and may be purchased online at ticketmaster.com/rodstewartvegas. Shows are scheduled for 7:30 p.m.

Sir Rod Stewart CBE is one of the best-selling music artists of all time, with more than 250 million records sold worldwide during a stellar career that includes hits in all genres of popular music from Rock, Folk, R&B and even the American Standards.

This versatility has made him one of the few stars to enjoy chart-topping albums throughout every decade of his career, now spanning over fifty years. In 2016, he was also knighted for services to music and charity, adding to his countless accolades, which include two inductions into the Rock and Roll Hall of Fame, the ASCAP Founders Award for songwriting, New York Times bestselling author, and Grammy™ Living Legend.

Born in North London with Scottish Celtic roots, Sir Rod Stewart has one of the most distinctive voices in music. That voice was first heard in the early 60's with Long John Baldry, Steampacket and Shotgun Express, as well as in his seminal work with Jeff Beck and the legendary rock band The Faces.

He went on to have a stellar solo career recording a string of some of the biggest hits in music including "Maggie May," "Forever Young," "Rhythm of My Heart," "Tonight's the Night," "I Don't Want To Talk About It" and "Da Ya Think I'm Sexy."

Sir Rod also recently revisited some of his greatest hits with "You're in My Heart: Rod Stewart with The Royal Philharmonic Orchestra." The album is a timeless record that retains the power, soul and passion and spent three weeks at the top of the charts making it Sir Rod's tenth Number One album; a milestone achievement in an already impressive career.

One of the most loved entertainers worldwide, Sir Rod recently completed his biggest UK tour ever as well as a Las Vegas residency at Caesars Palace. His sell out UK tour received rave reviews with the Telegraph commenting, "while so many of his contemporaries have announced retirements, Sir Rod keeps rocking on."

Since its premiere in August of 2011, "Rod Stewart: The Hits." has remained one of the best-reviewed and must-see shows on the Las Vegas Strip.

"Stewart is one of rock's great survivors and ambassadors of music." -- Forbes

"One of "Las Vegas' must-see musical events on right now. An on-your-feet, sing-along experience … as Stewart lives up to the show's title (Rod Stewart – The Hits) with a stacked performance of his singles."-- Billboard

"… he remains one of the foremost interpreters of songs and one of the all-time great rock singers." -- Rolling Stone