The opportunity to rename allows the theater to return to the city's hometown roots and historic significance to the City of San Jose. The theater previously closed a successful 5-year partnership with City National Bank. San Jose Civic is the original name of the theater. 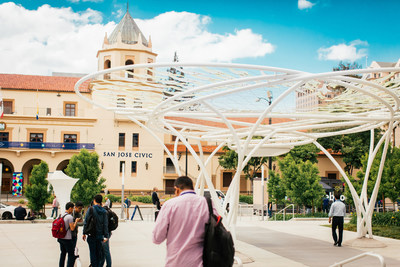 The updated branding of the San Jose Civic keeps the blue accent color identified with the theater. The design also returns to a more minimal silhouette of the venue rooftop tower and spire in its logo. All identifying collateral will now refer to the theater as San Jose Civic.

The San Jose Civic is one of four historic city-owned event venues operated by San Jose Theaters, a division of Team San Jose. The other three theaters, Center for the Performing Arts, California Theatre, and the Montgomery Theater (which is attached to the Civic) will remain in operation under their current names and branding.

"We are looking forward to further promote the Civic in relation to our destination, which aligns with our mission to promote San Jose as the center of performing arts and creative incubation of talents," says Karolyn Kirchgesler, CEO of Team San Jose. "With this cohesive rebranding, San Jose and the Civic will be even more synonymous with world-class theater, arts, and event space for years to come."

"The Civic has become a must-play venue for national and internationally recognized artists and tours. With over 100 concerts and performances annually, we are eager to continue the renowned standard of excellence for promoters, artists, and our visitors alike," says John Ciulla, General Manager of the San Jose Theaters.

The San Jose Civic originally opened in 1936 and is a designated City Landmark. It was designed by Binder & Curtis in a Spanish California Mission-style with influences of Native American designs in its lobby beams. In October of 2012, this classic venue reopened on the heels of a historic $25M renovation project.

The San Jose Civic has hosted significant figures in history, both of political and pop culture influence. In 1970, then-President Richard Nixon made national headlines when he was confronted by anti-war protesters at the Civic. It has also hosted prize fights for Jack Dempsey, Joe Louis, Max Bear and additional boxing greats. Perhaps most notable for its musical acts, the Civic has hosted The Who, The Rolling Stones, Frank Sinatra, Diana Ross, Bob Dylan, Barbra Streisand and many other legends.

The San Jose Civic was the site of Media Day for the NHL All-Stars in January and continually serves as a venue for many top Silicon Valley conferences, meetings, and events.

ABOUT TEAM SAN JOSETeam San Jose is an innovative partnership unifying the San Jose Convention and Visitors Bureau, hotels, arts, community business leaders, labor and public venues to deliver an exceptional visitor experience and serve as the gateway to San Jose as a destination. Team San Jose manages the San Jose McEnery Convention Center, South Hall, and arts and entertainment venues including the California Theatre, the Center for Performing Arts, Montgomery Theater, and San Jose Civic. In addition, Team San Jose created and operates a full-service catering facility that serves as the official caterer in all TSJ managed venues and is a UPS Franchisee. Team San Jose is a non-profit, economic development organization and the primary driver in generating economic impact to San Jose's local economy through leisure and business travel. For more information, visit www.sanjose.org.