HANGZHOU, China, March 31, 2021 /PRNewswire/ -- At 17:00 Beijing Time, SCANTECH had its online global launch event to introduce to worldwide customers its latest technological research outcome – SIMSCAN 3D scanner. SIMSCAN is by far the only palm-sized 3D scanner in the marketplace, it marks an innovational breakthrough in the 3D metrology-grade industry for getting rid of the traditional structure. SIMSCAN has had multiple patented technologies and won the 2021 Red Dot Award. 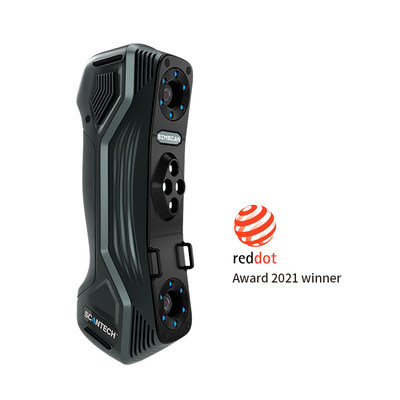 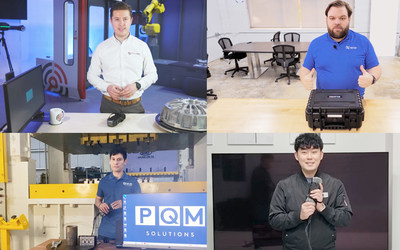 SIMSCAN is achieved by years of SCANTECH's development in metrology field. SCANTECH's R&D team had been reviewing things and pondering one question: can the new generation of products surpass the previous 3D scanners and be more perfect in terms of structure and performance? The answer brings up SIMSCAN, with "SIM" from a sim card and the word simple, both of which highlight the small size of SIMSCAN. Today, after two years of development and optimization, SIMSCAN makes its debut. It comes at 570g and 203 mm × 80 mm × 44 mm, a device that fits in a palm, wherever work is. So no matter if users are in a narrow space or facing a large-scale project, the measuring speed of 2.02 million times per second allows users to have 3D measurements whenever and wherever possible. The measurement accuracy of 0.020 mm manifests more details like never before.

The charm of fashion is retained alongside a sense of science and technology, which explains SIMSCAN's winning of the 2021 Red Dot Award in. Equally renowned as the IF Product Design Award, Red Dot Award is also one of the largest and most influential design competitions worldwide. Actually, Red Dot Award, IF Product Design Award, and IDEA Award are known as the three major design awards of the world. This year, SIMSCAN stood out amid numerous competitors to have won the ultimate award, which is a great approval of SIMSCAN's design and product value.

Meanwhile, Mr. Oscar. Meza, the newly appointed global CCO, had his first public appearance at the event, and it marked an important step of SIMSCAN's strategy of globalization. With more than 20 years of experience in the expansion, sales, and marketing in the 3D digitalization industry, Oscar has served as VP and CEO responsible for global sales and marketing at several 3D digital technology companies.

SCANTECH also aims to the core users around the world to have a trial use of new products. At the event, global users joined the live broadcast to share their thoughts. They mentioned that SIMSCAN is portable, aesthetically cool-looking with scientific elements, and its scanning is smooth and accurate enough to fulfill metrology-grade measurement .

"SCANTECH has been quickly growing these years that it is now one of the best brands of 3D digitalization around the world. The launch of a portable 3D scanner SIMSCAN is both innovative and groundbreaking industry-wide, and I have a reason to believe that SCANTECH will achieve more in 3D digitalization", said an industry expert.

In 2021, SCANTECH is poised to proceed with its 3D digitalization strategy to independently seek every innovative possibility down the road of the industry. With all the necessary technologies at hand, it will consolidate the domestic market and expand globally to become a proud Chinese brand.