LONDON, July 30, 2019 /PRNewswire/ -- A sculpture which honours victims of sexual violence in conflict around the world, including the women who were terribly abused during the Vietnam War, was installed today in St James's Square, Westminster. "Mother and Child" was officially unveiled last month by Nadia Murad, 2018 Nobel Peace Prize winner, at an event in Westminster which convened senior politicians and civil society groups to discuss how the international community can combat sexual violence. 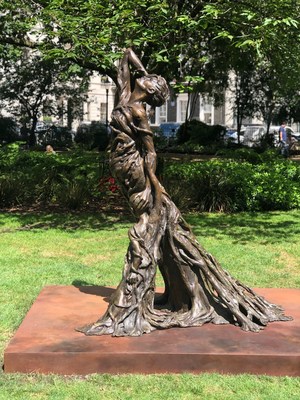 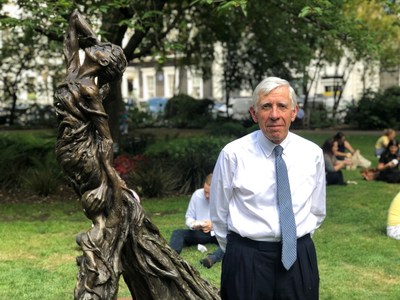 The sculpture, made of bronze and weighing approximately 700kg, depicts a mother and her child trapped by the roots of a Strangler Fig tree, a plant native to Vietnam, and serves as a beacon of hope to all victims of sexual violence. "Mother and Child" was commissioned by Justice for Lai Dai Han (JLDH), a group campaigning for an independent UN-led investigation into allegations of widespread sexual violence by South Korean soldiers during the Vietnam War.

Between 1964 and 1973, some 320,000 South Korean soldiers were deployed to Vietnam to fight alongside the United States. Tens of thousands of women were allegedly raped by South Korean soldiers during the Vietnam War. Many of the women were as young as 12 or 13 at the time. JLDH represents these women, of whom 800 are still alive today, and their children known as the "Lai Dai Han," the thousands of dual heritage Korean-Vietnamese individuals born as a result of wartime rape.

"I urge everyone to visit the sculpture in St. James's Square, which honours all who are survivors of sexual violence in conflict. We need an independent investigation by the UNHCR into the rape of Vietnamese women by South Korean soldiers. We hope that the sculpture will serve as a poignant reminder of the horror of sexual violence and encourage the Government of South Korea to acknowledge the crimes committed by its troops and support an independent UN investigation."

The "Mother and Child" sculpture was designed and created by British artist Rebecca Hawkins. She said:

"I hope that this statue helps raise awareness for this important campaign and gives the women and children the closure and recognition they need. Despite suffering and hardship, they have bravely stood up to tell their story and campaign for justice for themselves and their peers. This sculpture is a celebration of their strength of spirit in the face of such adversity."

At the sculpture unveiling event in Westminster in June, several members of the Lai Dai Han community were joined on stage by Nadia Murad, an Iraqi Yazidi human rights activist who won the Nobel Peace Prize in 2018 for her efforts to end the use of sexual violence as a weapon of war and armed conflict. JLDH also welcomed distinguished UK Parliamentary supporters, including Chair of the All Party Parliamentary Group on Vietnam, Wayne David MP, and Co-Chair of the All-Party Parliamentary Group for Preventing Sexual Violence in Conflict, Baroness Nicholson of Winterbourne.

ABOUT THE LAI DAI HAN

Justice for Lai Dai Han gives a voice to the victims and their children and campaigns for South Korea to recognise and investigate the allegations of widespread rape and sexual violence.

Justice for Lai Dai Han works with policy makers, writers and artists to ensure this injustice is finally recognised, alongside fundraising efforts on behalf of the Lai Dai Han and their families.

Our work seeks to raise public awareness, to allow political and community leaders to connect with the victims of sexual violence to understand their suffering firsthand, and to create public art as a permanent reminder of the plight of the Lai Dai Han.