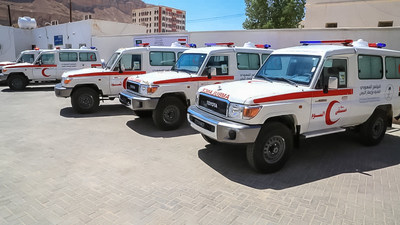 Deputy Governor Al-Kuthairy said during the ceremony that these projects are among about 16 between coast and valley, designed to help strengthen infrastructure and raise service efficiency in all fields. He stressed that the rest would be launched after the month of Ramadan. He offered thanks to Custodian of the Two Holy Mosques King Salman bin Abdulaziz and HRH Crown Prince Mohammed bin Salman, and expressed appreciation for SDRPY's support for Hadhramaut in these difficult circumstances.

SDRPY Al-Mahra and Hadhramaut Office Director Eng. Sadiq Bashrahil explained that the ambulances would be distributed to the districts of Al Abr, Al-Sawm and Thamud in Hadhramaut Valley, with two vehicles allocated to Hadhramaut coastal districts. The projects come in the wake of field visits by SDRPY specialists to the governorate, and multiple meetings with local authorities and management of numerous executive bodies, at which Hadhramaut's service and development needs were discussed.

On Thursday, SDRPY launched projects to furnish 32 schools in each of Al-Mahra and Socotra Governorates, serving more than 8,000 students annually in both provinces within the framework of SDRPY education sector support.

In the presence of Socotra Governor Ramzi Mahrous, Saudi Coalition Forces Commander Brigadier General Abdul Rahman bin Salman Al Hajji, and Socotra Education Office Director-General Ahmed Ibrahim Al-Thaqali, the Education Office in Socotra celebrated the inauguration of a project to equip 27 schools in the province with new furniture, meeting their needs for seating and desk space and benefiting some 4,000 students in the governorate. Mahrous noted other education projects that SDRPY was working on in the governorate, including construction of 4 schools and supply of textbooks to the Education Office, which he considered priority projects.

"This is not the first project we have launched with the Saudi Development and Reconstruction Program for Yemen, and, God willing, it will not be the last," he said. "We are happy to receive the program's support in the education sector, as it is one of the sectors that is suffering in the governorate due to current circumstances in Yemen."

Mahrous indicated that more projects would be launched soon, and that Socotra's local authorities would help the specialists of SDRPY overcome any obstacles they may experience in the province. He also expressed thanks to Custodian of the Two Holy Mosques King Salman bin Abdulaziz Al Saud, Crown Prince Mohammed bin Salman, and SDRPY Supervisor-General Ambassador Mohammed bin Saeed Al Jaber.

In Al-Mahra Governorate, work includes organizing distribution of furniture to classrooms, desks and school facilities, meeting all requirements for desks and chairs, laboratories and blackboards for each classroom, and providing teachers and administrators with offices, shelves and meeting tables at 5 educational facilities, in Al-Masilah, Al-Ghaydah, Hawf and Sayhut. SDRPY-equipped schools in Al-Mahra are expected to serve about 4,000 beneficiaries.

SDRPY education sector projects in Yemen include construction of schools with facilities such as playgrounds, laboratories and squares to support extracurricular activities, ensuring that male and female students acquire knowledge and skills to high standards, and enabling them to pursue rewarding careers.

SDRPY supports the Yemeni governorates in vital and basic sectors, namely: health; education; electricity and energy; agriculture and fisheries; water; roads, ports and airports; and government entities. The program also works in the field of environmental sanitation and hygiene.