SOCOTRA, Yemen, April 13, 2020 /PRNewswire/ -- In completion of a project to provide 100 boats to fishermen affected by hurricanes and tropical conditions, the Saudi Development and Reconstruction Program for Yemen (SDRPY) is distributing the second installment of fishing boats with modern engines in the Governorate of Socotra Archipelago. 300 fishermen will benefit directly from this delivery, aimed at contributing to the recovery of the fishing sector, improving family incomes, advancing self-sufficiency to achieve sustainable food production, and increasing productivity. It will also further a sustainable economic environment and increase job opportunities. 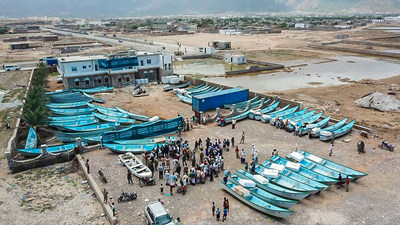 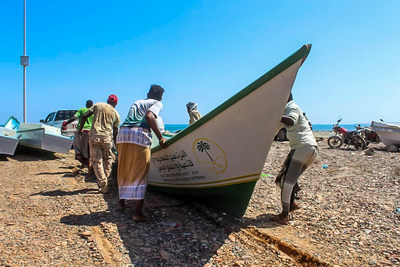 "On behalf of all the people of the province, I extend my thanks and appreciation to the Custodian of the Two Holy Mosques King Salman bin Abdul Aziz and his Crown Prince, Mohammed bin Salman," Governor Mahrous said during the inauguration. He also thanked SDRPY Supervisor-General Ambassador Mohammed bin Saeed Al Jaber for his interest and efforts in working with program personnel on development and reconstruction projects in vital sectors in the province. The projects that the Kingdom of Saudi Arabia offered the people of the province would remain immortal in the minds of generations, the governor stressed, and said Socotrans would remain loyal to their Saudi brothers and sisters.

Brigadier General Al-Hajji confirmed that the project was an extension of those the Kingdom had implemented in Socotra under the guidance of King Salman and the Crown Prince in support of all Yemeni provinces, with the direct participation of SDRPY Supervisor Ambassador Al Jaber. Al-Hajji explained that the boats being delivered had been manufactured in local Yemeni factories, according to special specifications to adapt them to conditions in the Socotra Archipelago. This was the second batch of boats, he said, to arrive in support of the Yemeni brothers on the island.

The fisheries sector in Yemen provides employment opportunities for more than half a million individuals, who in turn support 1.7 million and make up 18% of the coastal population of 9.4 million. Fishing is thus a major source of income, an important sector for job creation, and a key tributary of the economy. Yemeni fisheries are a vital component of the livelihood of Yemeni citizens and a major source of food security.

SDRPY operations are not limited to the fishermen of Socotra Archipelago, as the program has supplied 100 boats to fishermen in Al-Mahra Governorate as well. The Republic of Yemen's coastline stretches more than 2,500 km along three seas – Red Sea, Gulf of Aden, and Arabian Sea – and encompasses 10 governorates: Aden, Abyan, Hadhramaut, Hodeidah, Hajjah, Lahj, Taiz, Shabwah, Al-Mahra and Socotra. Yemeni territorial waters contain over 350 types of fish and other sea creatures.

SDRPY aims to achieve its development goals in alignment with the objectives of United Nations Sustainable Development Goal 14: "Conserve and sustainably use the oceans, seas and marine resources for sustainable development."