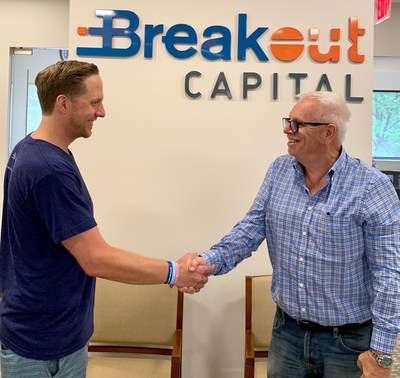 Steve Russell, CEO of SecurCapital commented, "We're delighted to have found a highly respected team and innovative business model in the small business finance space. I share the founder's vision of the massive potential of the FactorAdvantage lending solution and believe we now have the platform and capital to rapidly grow this industry-changing product. We couldn't have found a better business to complement SecurCapital's strategic vision for empowering small businesses." SecurCapital, through a series of strategic acquisitions, provides supply chain and financial services to small businesses primarily in the logistics industry, including veteran-and minority owned businesses.

Breakout Capital Finance's Founder, Carl Fairbank added, "After four years as Founder and CEO of Breakout Capital Finance, this transaction begins the next chapter of Breakout Capital's lending business. SecurCapital is also committed to the proliferation of best practices to drive change in the broader market. I believe Breakout Capital, in partnership with SecurCapital, is now well positioned for substantial growth, especially with its commitment to FactorAdvantage." Mr. Fairbank will provide strategic guidance during the transition, but has stepped down as CEO of the lending business to focus on driving innovation in advanced technology, including artificial intelligence, machine learning, and blockchain.

Tim Buzby has been appointed as the new CEO of Breakout Capital. He spent 17 years at Farmer Mac, in executive positions culminating as CEO. Notably, he oversaw a 58% increase in company earnings and an almost 4x increase in stock price and strategically matured the company into an agricultural lending industry leader.

Breakout Capital has also hired McLean Wilson, former CEO of Charleston Capital, an asset manager in the SME space, and former CEO of inFactor, a factoring company, as Chief Credit Officer. Mr. Russell added, "With the appointment of Tim as CEO and the addition of McLean to the management team, we expect Breakout Capital not only to carry forward its role in the industry as product innovator and transparent lender but also to deliver financing solutions to a much broader range of small businesses."

Breakout Capital is committed to maintain the high ethical standards, best practices, APR-based disclosure, and competitive pricing for which it has always been known.

Breakout Capital, headquartered in McLean, Virginia, has been and will continue to be a leading fintech company, offering innovative small business lending solutions across the country.  As part of SecurCapital, Breakout Capital will remain committed to transparent and responsible lending solutions through product innovation, small business borrowing education, and advocacy against predatory lending practices and will continue to empower small business through right-sized lending, suitability testing, improving terms and supporting the long-term financing objectives of small businesses. Breakout Capital has been widely regarded as the "white-hat" lender in the alternative finance space and intends to retain that reputation as part of SecurCapital.