CAMBRIDGE, Mass., May 20, 2020 /PRNewswire/ -- Based on an analysis of changes in home energy trends across the country since Covid-19, Sense (sense.com) found that the average home electrical usage increased 22% compared to 2019, a reflection of people using more electricity while they stayed home. With this increase, most consumers will pay 22% more on their April electricity bill compared to April 2019, with a typical increase of $22-$25, and higher in states with steeper utility rates. 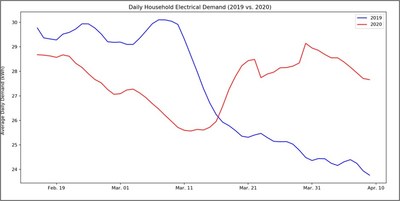 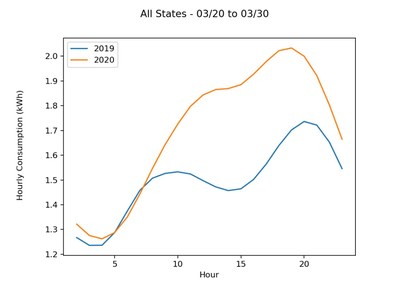 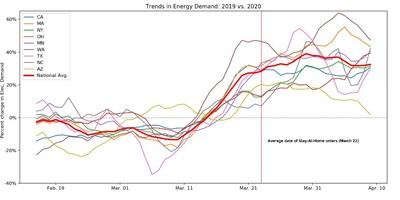 Ordinarily, home electricity demand decreases in the March through April time frame due to warmer weather in the spring. In 2020, instead of falling, daily electricity demand increased 22% from March 10 to April 10. Since weather is relatively temperate across most of the country in March and April, people can expect their costs to increase in the warmer months ahead as HVAC systems work to keep homes cool--assuming that most people are still at home.

Mid-day energy usage was the biggest factor in driving up energy demand. Ordinarily, home energy usage drops in the middle of the day between 10 am and 4 pm, when many people are away from home for work or school. Utilities call this pattern the "duck curve."

This year, the average home showed steadily rising energy usage starting at 5 am and peaking at 4 pm, followed by declining use through the evening and overnight. The biggest jump took place at 4 pm when the average home's energy usage increased by 425 kWh compared to 2019 averages. This change in energy usage reflects that most people are home all day and using electricity. In other words, the home's  energy "duck curve" has flattened for most Americans.

When Did People Stay at Home?

Sense discovered intriguing patterns in energy data that show people's responses to the Covid-19 epidemic. The data shows that most people made the decision to stay home soon after state emergencies were announced but well before state stay-at-home orders were issued. The biggest increases in home energy demand took place between March 10 and March 21, coinciding with work, school and college changes. As state governments ease restrictions in May, the Sense dataset points to multiple factors influencing peoples' decisions to stay home, including business and school policies.

The steep rise in energy demand as more people decided to stay home between March 10 and 21 coincides with a number of external events related to Covid-19 response that took place before the states issued stay-at-home advisories.

Based on these home energy trends, most Americans made their decision to stay home before being ordered to do so by the government. Other factors appeared to be influential, including actions by prominent businesses and colleges, the need to take care of school age children who were now at home, and emergency orders by states and the federal government.

The Sense home data revealed that after March 14, daily energy consumption increased 22.4% across the country, driven by a 35% increase in mid-day demand, but changes varied significantly across states. Interestingly, homes in North Carolina and Arizona increased at a rate that was half the national average, implying that fewer people stayed home in those states.

The governors of Arizona and North Carolina issued stay-at-home guidance on March 30, a week after most states. This later guidance may be a factor in residents' decisions. After March 14, the average North Carolina  home's daily consumption rose by 9.6%, and the average Arizona home's daily consumption rose by 8.6%, indicating that fewer homeowners were at home during the day compared to national averages.

About Sense's analysisSense analyzed  data for 5000 homes that have the Sense Home Energy Monitor across 30 states that are geographically representative of the country . The analysis identified percentage increases in home energy demand compared to the same dates in 2019 and normalized for weather. Duck curve data was analyzed for the period March 20-30 when home energy demand was at high levels. Note that Sense customer homes tend to be bigger than the national average and as a result, they have 23% higher energy bills than the US average.

About SenseSense's mission is to make all homes intelligent by keeping people informed about what's happening in their homes, and helping to make homes safer, more efficient, and more reliable. Founded in 2013 by pioneers in speech recognition, Sense uses machine learning technology to provide real-time insights on device behavior, even for those devices that are not "smart." Customers rely on Sense for a wide range of uses including monitoring their home appliances, determining whether they left appliances running and identifying how to reduce their energy costs. Sense has received investments from two of the world's largest energy technology companies, Schneider Electric and Landis + Gyr. Sense is headquartered in Cambridge, Mass. To make sense of your energy, visit: https://sense.com.

New survey from Sense finds that extreme weather has increased...