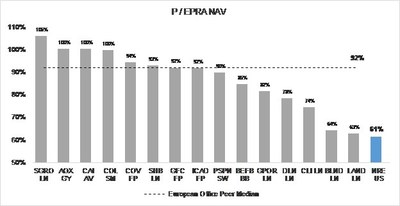 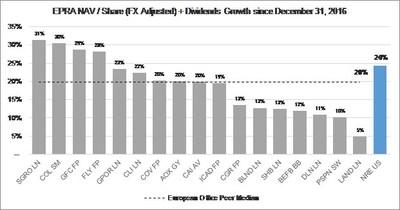 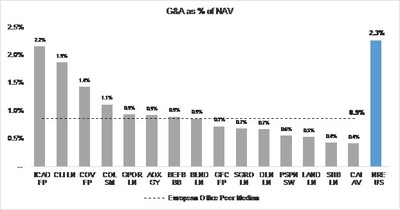 Specifically, Senvest believes the most significant factor behind NRE's substantial discount to NAV is the Company's unjustified and unusual reliance on an external manager, an affiliate of Colony Capital Inc.("CLNY")(NYSE: CLNY), which charges a management fee that further increases the Company's expense ratio.  To address this issue, Senvest believes that the Board should immediately change its "investment guidelines" as established under the terms of the Management Agreement and begin selling assets and returning the net cash proceeds to investors by way of stock buybacks or dividends.  As an alternative to selling NRE assets, Senvest believes CLNY should take the Company private at a price at or above the aggregate price that would be received in asset sales and which should represent a valuation close to or potentially greater than NAV.

The full text of the letter the stockholders sent to the NRE Board follows:

Dear Members of the Board:

Senvest Management, LLC ("Senvest Management" or "we") advises private investment funds that, as of September 24, 2018, own 4,757,009 shares of common stock of NorthStar Realty Europe Corp. ("NRE" or the "Company"), equal to approximately 9.55% of its shares outstanding, and have an even larger economic interest in the Company via a total-return swap position.  As you know, we have been a NRE shareholder since its inception in October 2015 stemming from its spin-off from former parent NorthStar Realty Finance and have also steadily increased our NRE investment.  A key consideration in our investment has been the strong execution by NRE's management team in acquiring valuable assets, investing capital where needed, managing the leasing and tenant roll and selling assets.  We further applaud the efforts of the Company's Board of Directors (the "Board") to create shareholder value through both the buyback of stock trading at significant discounts to net asset value per share and the renegotiation of the Company's management agreement with an affiliate of Colony Capital Inc. ("CLNY") (the "Management Agreement").

Despite all the commendable actions by management and the Board, NRE's stock still trades at a significant discount to net asset value.  Based on its closing price on September 24 of $12.87/share and the latest reported NAV at June 30, 2018 of $20.95/share, NRE's stock trades at a discount of approximately 40% of NAV.  This discount massively exceeds the median discount exhibited by a peer group of public European commercial office REITs by over 30 percentage points1. Since Q4 2016, NRE has generated among the highest NAV/share growth of any of its peers, which makes its discount to NAV especially frustrating2.

We believe that NRE's persistent and outsized discount to NAV stems from a number of potential factors.  NRE, with a market capitalization of about $600 million, lacks the scale of its public peers which have a median market cap of about $5 billion.  Because it lacks scale, NRE's G&A expenses as a percentage of NAV exceed peers by a factor of about 2x3.

However, we believe the most significant factor behind NRE's substantial discount to NAV is the Company's unjustified reliance on an external manager, CLNY, which charges a management fee that further pressures the Company's expense ratio. Moreover, this is also contrary to the practices of virtually all publicly traded European commercial real estate equity REITs, which are internally managed for good reason.  Even if NRE were to eliminate all internal expenses (e.g., audit, legal fees, public company costs and other corporate expenses), the management fee alone would represent ~1.5% of NRE's NAV, still well above the average expense load of peers.

NRE's association with CLNY has not helped the stock price.  A review of CLNY's and NRE's historical stock price performance appears to show a correlation.  Further to this point, since CLNY's stock price started its precipitous decline in December 2017 from $12/share to $6/share over the course of three months, NRE's shares followed suit. The comparison is even starker when viewed against the performance of European office peers over the same time frame4.  Since NRE's 4Q17 earnings report, when the Company reported 2H17 NAV per share sequential growth of ~15% (better than the peer median growth by a factor of over 2x) and announced the authorization of a $100 million buyback, the stock only temporarily outperformed both CLNY and European office peers before once again selling off over the last month5. In any event, for all of the above factors, we believe that NRE's stock price discount to NAV will persist for the foreseeable future.

We believe that NRE shareholders have waited long enough for the efforts of management and the Board to collapse the NAV/share discount.  The private market, which provides the basis for the NAV calculation, clearly assigns more value to NRE's assets than the value ascribed by public market investors.  Indeed, we think that institutional investors would have great interest in the assets but clearly have no interest in the shares.  Moreover, we believe the timing for asset sales is ideal given the close to all-time low cap rates and the healthy institutional demand for prime European office assets.  NRE could also earn a premium to NAV for its French and German assets given their scarcity value and scale if each were sold as country portfolios.

As a result, we believe that the Board should immediately change its "investment guidelines" as established under the terms of the Management Agreement and begin selling assets and return the net cash proceeds to investors by way of stock buybacks or dividends.  Based on a review of the Management Agreement with our legal counsel, we believe that NRE could sell and return the proceeds to shareholders from a significant portion of its net assets over the next six to nine months.  NRE could then sell its remaining assets a year after that without resulting in a meaningful potential change-of-control payment to CLNY.  We further note that based on our market research, and the fact that the Company has sold approximately 28 properties for $760 million at or above NAV, we believe that NRE has been conservative in its assessment of property values and could garner a premium to NAV.

Of course this strategy will cause the total NAV of NRE to decline over time.  Under the Management Agreement, CLNY earns a management fee based on the Company's aggregate net asset value.  Since the net asset value would eventually decline to zero in this strategy, the management fee paid to CLNY will similarly decline to zero over time.  As a result, CLNY may not support this approach since a key tenet of their corporate strategy rests on collecting asset management fees from "…strategic GP co-investment positions such as…NRE, where the company [CLNY] receives various management economics from the related third-party capital in such vehicles."6.  We remind the Board that it has a fiduciary obligation to the shareholders of NRE, not the shareholders of CLNY, and should dismiss any potential opposition to this strategy from CLNY given the obvious conflict of interest. We call on the Board to do the right thing for NRE shareholders and act to collapse the discount to NAV.

As an alternative to selling NRE assets, we believe that CLNY should take the Company private at a price at or above the aggregate price that would be received in asset sales and which should represent a valuation close to or potentially greater than NAV.  Again, we think the Company has been conservative in its valuation assumptions and could also get a premium to NAV for the French and German assets, which compose more than two-thirds of NRE's rental income.  CLNY states it "…is a leading global investment management firm…"7 and touts its "world-class real estate and investment management platform.8"  CLNY directly manages approximately $6.2 billion in private institutional fee paying investment funds9. It also manages $5 billion in fee paying assets related to non-wholly owned Real Estate Investment Management ("REIM") platforms10.  Given CLNY's supposed fund raising capabilities and its stated strategy of raising capital around key verticals, an alternative for NRE would be for CLNY to raise private capital, either directly via institutional funds or in conjunction with a third party REIM, and buy out the public NRE shareholders at a price at least equal to the value that NRE could achieve via the sale of assets as suggested above.  This will benefit both NRE shareholders and CLNY, which can fulfill its strategy of "strategic GP co-investment positions" and continue to earn management fees on third party capital from NRE assets but in a privately owned structure.

We believe that the Board should immediately undertake a formal review of the strategies mentioned above, as taking action to address the Company's trading discount to NAV is imperative to the Board's fulfillment of its fiduciary duties.  We look forward to further engaging with the Company on its progress in reviewing the aforementioned strategies and appropriate alternatives in the coming weeks. We sincerely hope that shareholders can rely on this Board to take action and will not have to resort to changing the composition of the Board to one that will take action to address NRE's persistent, significant share discount.

Senvest Management, LLC ("Senvest") is a registered investment advisor founded by Richard Mashaal in 1997. Senvest is based in New York and employs a contrarian, value-based investment strategy across more than $1.5 billion in assets under management. Senvest is registered with the U.S. Securities and Exchange Commission.