ATLANTA, Oct. 24, 2018 /PRNewswire/ -- Randstad US today released results of a survey uncovering U.S. employees' feelings and experiences with political discussions in the workplace, and how an employer's approach to political issues can influence employee engagement and retention. The data shows that while almost half (49%) of respondents enjoy talking politics with colleagues because it helps them understand other viewpoints, 53 percent admit they limit social interactions with co-workers who have differing political beliefs. 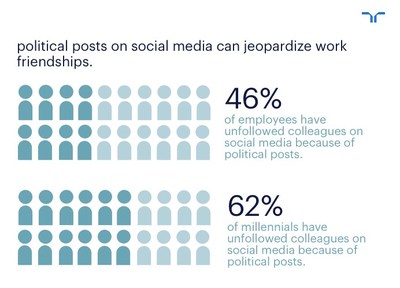 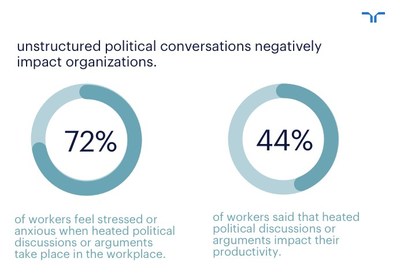 "Our study shows the topic of politics itself is extremely divisive in the workplace, reflecting our country's current polarized political climate," said Audra Jenkins, chief diversity and inclusion officer, Randstad North America. "It seems there's no escaping politics, even on supposedly neutral ground, and unfortunately this can contribute to feelings of alienation as well as deteriorating relationships in the workplace. Managers must pay close attention to workplace dynamics within their teams and be sure they're promoting cultures that are inclusive and tolerant of a range of different political perspectives. Without a strategy in place, organizations run the risk of impacting their diversity and inclusion initiatives by creating another barrier that limits the diversity of thought."

Some employees see the benefits of discussing politics at work, but the risk of negative consequences is high

Differences in political viewpoints, whether expressed in person or online, can be alienating and damage workplace camaraderie

Political viewpoints can drive employees to quit their jobs, or determine the employment opportunities they seek

Politics matter more to millennials than other generations

"Today, the line between business and politics is becoming increasingly blurred as more and more companies take public stands on controversial issues, which simply wasn't as common even a few years ago," said Jenkins. "Our data shows employees are split on how politically engaged they want their companies to be — but many are hoping their employers will become more politically engaged, especially millennials. As the millennial generation rises in the ranks in the workplace, I expect we'll see a shift in how companies manage their charitable and civic actions."

Survey MethodologyResearch findings are based on an OmniPulse survey fielded by national polling firm Research Now on behalf of Randstad US. The survey was fielded from August 13–17, 2018. It included 807 respondents over the age of 18 and a nationally representative sample balanced on age, gender and region.

About RandstadRandstad North America, Inc. is a wholly owned subsidiary of Randstad N.V., a €23.3 billion global provider of flexible work and human resources services. As a trusted human partner in the technology-driven world of talent, we combine the expertise and passion of our employees, with some of the most innovative HR technologies on the market today, to advance the careers and business success of our candidates and clients.

Randstad US and Udemy announce new partnership to launch skilling ...