NEW YORK, Aug. 15, 2017 /PRNewswire/ -- Shimao Qianhai Center, a major landmark in Shenzhen, China, debuts on the large billboard overlooking New York's Times Square on August 15, 2017. The same day, promotional campaigns highlighting the center kicks off in Beijing, Shanghai, Shenzhen and Guangzhou, China. Shimao Qianhai Center's campaigns simultaneously conducted in the five cities not only announce its commitment to international expansion, but also demonstrate the landmark's strong self-confidence and pride in both the property project itself and in China's stature as a leading economic power on the international stage. 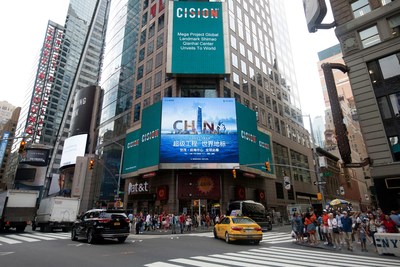 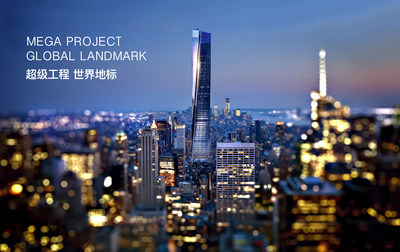 Under the One Belt, One Road initiative, the Chinese government's program to build trade routes along the ancient Silk Road, the country has sped up development of Guangdong-Hong Kong-Macao Greater Bay Area in accordance with its national economic development strategy, one which will have a far-reaching influence on China's and the world's economy. Qianhai, a US$60 billion investment, will serve as an anchor force and a core element of the area's economy.

The center, a super-scale landmark located in the core area of Qianhai Mawan, Shenzhen, is a joint project involving five internationally-renowned design firms, Gensler, AECOM, Woods Bagot, ARUP and Foster. The structures, in the shape of a double helix, feature a core structure capable of rotating up to 45 degrees, unique never-before-seen design principles applied to both the interior and exterior of the buildings and walls that can be raised as needed in the same manner as a curtain. The project is another milestone following Shanghai Shimao Co., Ltd.'s five-star hotel expressly placed in the center of a deep stone pit and which further demonstrates China's growing strength on the global stage.

Shimao Qianhai Center, a 300-meter-high skyscraper building, with mountains as a backdrop on one side and the sea on the other, assures its occupants of 10,000 meter-long unblocked vistas including views of Hong Kong and Shenzhen. It is the sole building in Shenzhen currently selling high-rise office space, with 15 rare roof-top office units on offer.