NEW YORK, Aug. 2, 2021 /PRNewswire/ -- Stitcher, the Triton-ranked #1 podcast company and SiriusXM (NASDAQ: SIRI) subsidiary, today announced the signing of Eric Eddings and Brittany Luse for the relaunch of their beloved Black culture show For Colored Nerds, which is expected to premiere later this year.

Stitcher will produce the series with Luse and Eddings; SXM Media will be the exclusive advertising and sales representative for the podcast. 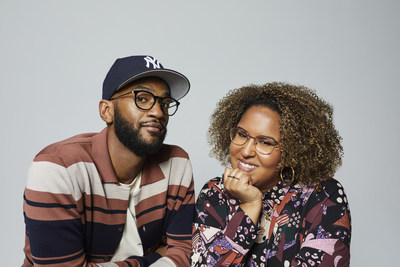 Each week on For Colored Nerds, Luse and Eddings will use smart conversation, celebrity guests, and archival media to take a deep-dive into an aspect of Black culture that's ripe for dissection. The show could be contextualizing the journalistic legacy of Wendy Williams one week, and doing critical and sociological analysis of MTV's The Challenge with one of its cast members the next.

"For Colored Nerds started in my living room in 2014 with a Google Doc and a borrowed mic," said Eddings. "It was meant to help Brittany and I become closer friends and articulate our view of the culture and history we love. We couldn't have imagined that project would spawn The Nod and The Nod with Brittany and Eric on Quibi. As we make our return to podcasting, words can't express how happy I am that we are bringing back For Colored Nerds and that we get to make it on our terms with incredible support from Stitcher."

"I'm so thrilled to partner with Stitcher as Eric and I return to the project that first sparked our love of audio," said Luse. "Launching For Colored Nerds seven years ago quite literally changed our lives. Making the show deepened our friendship, but it also connected us to a beloved constellation of listeners around the world, as well as a podcasting community that has given us so much over the years. I couldn't be more excited to come back to audio with the encouragement of our team at Stitcher, who respect our vision and independence so fiercely."

"Brittany and Eric are such a joy to listen to and to work with, and I could not be happier to be supporting them again," said Peter Clowney, Vice President of Content at Stitcher. "We're committed to making SiriusXM the best place in podcasting for creators, and deals like this are how we get there."

For Colored Nerds joins other iconic, acclaimed and original podcasts whose home is SiriusXM, Stitcher and Pandora, including such popular shows and series as Office Ladies, Comedy Gold Minds with Kevin Hart, Conan O'Brien Needs a Friend, WTF with Marc Maron, LeVar Burton Reads and podcasts from Marvel Entertainment, and prestigious documentary and narrative projects such as Toxic: The Britney Spears Story, Heaven's Gate, Unfinished, The Dream, Sporkful and Hidden Brain.

Stitcher has ranked #1 in Triton Digital's industry-tracking U.S. Network Report for May and June 2021. The report ranks the top podcast networks in the U.S., as measured by Podcast Metrics based on average weekly downloads and average weekly users.

For Colored Nerds will be available on Stitcher, SiriusXM's mobile app, Pandora, and all major podcast listening platforms.

Brittany Luse is an award-winning journalist, on-air host, cultural critic, producer, and editor. She most recently co-hosted and executive produced The Nod with Brittany and Eric, a daily streaming show. Before that, Brittany hosted and produced The Nod and Sampler podcasts at Gimlet Media, and the independent podcast For Colored Nerds. She has written for Refinery29 and Harper's Bazaar, and she has edited for NPR's Planet Money. Brittany and her work have been profiled by The New Yorker, The Guardian, NPR, Essence, and Teen Vogue, among others.

Eric Eddings is a journalist, producer and on-air host. He most recently co-hosted and executive produced The Nod with Brittany and Eric, a daily streaming show about Black culture on the Quibi platform. Previously, Eric hosted and produced the podcasts The Nod for Gimlet Media, The Decade Wrapped for Spotify, as well as the independent podcast For Colored Nerds. His reporting has also been highlighted on the shows Mogul, UnCivil, Undone, and The Habitat. Eric's work has been featured by The New Yorker, The Guardian, NPR, Essence, and Vogue, among others.

Stitcher is the best place to listen to, produce and monetize podcasts. The Stitcher app is one of the world's most popular podcast listening platforms, with a growing network of original content and a premium subscription service. Stitcher is also parent to Midroll, the leading podcast advertising network representing over 300 of the world's largest podcasts. And, it is home to top-ranked comedy podcast network Earwolf. Stitcher has offices in Los Angeles, New York City and San Francisco, and is a subsidiary of SiriusXM.

SXM Media is the combined sales organization of Sirius XM Holdings Inc., spanning its SiriusXM, Pandora, and Stitcher audio entertainment platforms and services. With a reach of more than 150 million listeners, SXM Media gives brands, creators, and publishers access to the largest digital audio advertising platform in North America. SXM Media also serves as the exclusive advertising and sales representative for other platforms and podcasters, including major entities such as SoundCloud (exclusive U.S. advertising representative) and the NBCUniversal News Group (exclusive advertising representative for NBC News and MSNBC podcasts, with additional sales rights to CNBC podcasts).