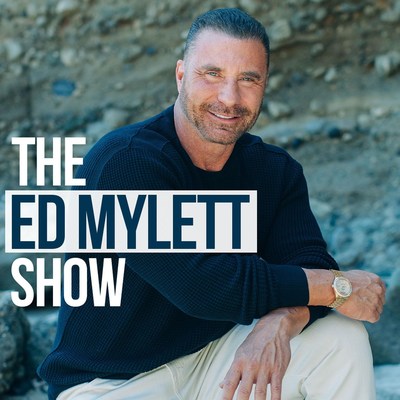 The multi-year agreement marks the show's first network representation deal. Previous to joining Stitcher, The Ed Mylett Show was independently released. Since its inception, the show has been downloaded over 90 million times, and regularly charts as one of the top business shows on Apple Podcasts.

"I couldn't be more excited to join the Stitcher family," said Ed Mylett. "I wanted to collaborate with people who shared my standards to deliver the best content possible every single week to our precious audience, and who have the background and structure to deliver on that promise."

Stitcher will produce the show. Access for brands and marketers to The Ed Mylett Show is only available through SXM Media – the exclusive advertising and sales organization that includes inventory across SiriusXM, Stitcher, Pandora and other major platforms and podcasters.

This news follows other notable announcements by SiriusXM, including the acquisitions of 99% Invisible, as well as agreements with the Audiochuck network and its chart-topping show Crime Junkie, For Colored Nerds, The Bellas Podcast, New Rory and MAL, and The Last Podcast on the Left. In addition, The Ed Mylett Show joins the home of other acclaimed podcasts at SiriusXM, Stitcher and Pandora, including Office Ladies, Comedy Gold Minds with Kevin Hart, WTF with Marc Maron, Hidden Brain, series from Marvel Entertainment, and prestigious documentary and narrative projects such as Toxic: The Britney Spears Story, Heaven's Gate, and Unfinished.

Stitcher has ranked #1 in Triton Digital's industry-tracking U.S. Network Report for May, June, July, August and September 2021. The report ranks the top podcast networks in the U.S., as measured by Podcast Metrics based on average weekly downloads and average weekly users.

Listeners can subscribe to The Ed Mylett Show on Stitcher, the SXM app, Pandora, and all major podcast listening platforms.

About Ed MylettEd Mylett is a highly successful entrepreneur who has blended his unique experiences with a diverse set of practical strategies that have made him one of the most sought-after inspirational speakers in the world today. With a strong desire to help others, Ed began sharing his motivational and performance strategies live and online. In four short years, he amassed more than two million Instagram followers, wrote a bestselling book, and launched a popular weekly podcast, The Ed Mylett Show. Ed thoroughly enjoys engaging with his followers and is active on several social media platforms where his posts are viewed several million times each month. He is well known for combining spirituality, faith, the inner workings of the mind, and tactical thoughts and actions to help people produce real changes in their lives.

About StitcherStitcher is the best place to listen to, produce and monetize podcasts. The Stitcher app is one of the world's most popular podcast listening platforms, with a growing network of original content and a premium subscription service. Stitcher is home to top-ranked comedy podcast network Earwolf. Stitcher has offices in Los Angeles, New York City and San Francisco, and is a subsidiary of SiriusXM.

About SXM MediaSXM Media is the combined sales organization of Sirius XM Holdings Inc., spanning its SiriusXM, Pandora, and Stitcher audio entertainment platforms and services, including that of Midroll, the leading podcast advertising network representing over 300 of the world's largest podcasts. With a reach of more than 150 million listeners, SXM Media gives brands, creators, and publishers access to the largest digital audio advertising platform in North America. SXM Media also serves as the exclusive advertising and sales representative for other platforms and podcasters, including major entities such as SoundCloud (exclusive U.S. advertising representative) and the NBCUniversal News Group (exclusive advertising representative for NBC News and MSNBC podcasts, with additional sales rights to CNBC podcasts).

About SiriusXMSirius XM Holdings Inc. (NASDAQ: SIRI) is the leading audio entertainment company in North America, and the premier programmer and platform for subscription and digital advertising-supported audio products. Pandora, a subsidiary of SiriusXM, is the largest ad-supported audio entertainment streaming service in the U.S. SiriusXM and Pandora's properties reach more than 150 million listeners, the largest addressable audience in the U.S., across all categories of digital audio – music, sports, talk, and podcasts. SiriusXM's acquisitions of Stitcher and Simplecast, alongside industry-leading ad tech company AdsWizz, make it a leader in podcast hosting, production, distribution, analytics and monetization. SiriusXM, through Sirius XM Canada Holdings, Inc., also offers satellite radio and audio entertainment in Canada. In addition to its audio entertainment businesses, SiriusXM offers connected vehicle services to automakers. For more about SiriusXM, please go to: www.siriusxm.com.