NORTH BRUNSWICK, N.J., July 28, 2020 /PRNewswire/ -- Thousands of social workers across the country are calling for police reform to their local police departments, statehouses, and to Capitol Hill. Members of the National Association of Social Workers in New Jersey, New York City, Delaware, Texas, Arizona, and Colorado chapters are calling elected officials in their communities, states and in Washington for the creation of accountable policing in local communities, the creation of mandatory civilian review boards, elimination of qualified immunity, and urging the United States Senate to support legislation similar to HR7120, the "George Floyd Justice in Policing Act", which passed the House of Representatives last month.

"Creating an accountable police force starts by implementing policies that make the police force directly responsible to the people they serve," said Jennifer Thompson, social worker and Executive Director of the National Association of Social Workers in New Jersey and Delaware. "True transformative change will occur when precincts in cities and towns across our country adopt new attitudes towards policing and community interaction—when they work collaboratively and in partnership with communities, rather than from an authoritarian perspective," Thompson continues. "And while that work happens at a local level, it can be guided by strong state and federal law and policy."

The profession of social work is no stranger to political and social action. The NASW Social Work Code of Ethics notes attention to the environmental forces that create social problems—for instance how the forces of racism and bias contribute to problems between police and the communities they serve—is fundamental to social work. Social workers are agents of change and seek to promote the responsiveness of organizations, communities, and other social institutions to individual and community needs and social problems.

"The social work profession is deeply rooted in social justice and advocacy," said Dr. Claire Green-Forde, social worker and Executive Director of the National Association of Social Workers-NYC Chapter. "As a profession, we are called to engage and lead this dialogue as we are keenly aware of the racial injustices that plague our society as well as the profound ways that these injustices influence every aspect of our lives and the communities we serve," Dr. Green-Forde continues. "We believe that police reform is intimately connected to the larger call for social justice, racial equity, and criminal justice reform."

Social workers bring a variety of skills and experiences to the fight for social justice and police reform. Regardless of the setting in which a social worker practices—community center, hospital, mental health agency, school, elected office, and more—all social work education includes grounding in cultural sensitivity, awareness of internal bias, and a systems perspective that helps social workers develop a keen sense of internal and external forces that combine to create social problems.

"When you see the scope of work that social workers are engaged in, as well as the diversity of their expertise, it is clear why leadership looks to us for guidance as it relates to police reform," added Will Francis, social worker and Executive Director of the National Association of Social Workers in Texas. "But social workers must be engaged in the dialogue from the beginning. We must have a seat at the table in the planning and policy-making phases as well.  In addition to asking critical questions, we're asking for seats at the local, state and national tables."

"Under normal circumstances, we would be marching, we would be organizing, we would be knocking on doors and taking meetings in every town, statehouse and in Washington," added Brandie Reiner, social worker and Executive Director of the National Association of Social Workers in Arizona. "Right now, advocacy looks different, but we will not be silent. We will not be deterred. We are called to action, and today, our profession meets that call."

Mildred "Mit" Joyner, President of the National Association of Social Workers, quoting her friend, the late Representative John Lewis, added, "We must show up, stand up and speak up and bend the arc of justice toward equality for all."

"This may be the defining work of our generation," says Heather McLaughlin, social worker and Executive Director of the National Association of Social Workers in Colorado. "The specters of slavery, Jim Crow, and racial bias in law enforcement have pervaded our society for far too long. As social workers and agents of social justice, we have the responsibility to work towards systemic change for the betterment of communities of color."

"The efforts today are just one piece of how we are creating change in our communities," Thompson furthered.  "Our message to all of our government leadership is that our profession, social workers, are watching and leaning in---holding everyone accountable as we create change. But we aren't just saying 'do better' we are also saying, 'we are here to do the work too, let's get to it.'" Thompson concluded.

Founded in 1955, the National Association of Social Workers (NASW) is the largest membership organization of professional social workers in the world, with more than 120,000 members. The chapters referenced represent over 20,000 social workers in their respective states. For more information on the work, you can visit www.naswnj.org. 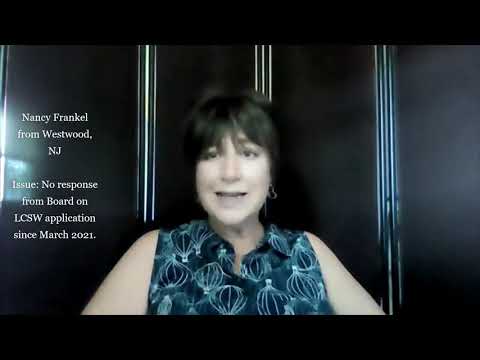