PHNOM PENH, Cambodia, May 28, 2019 /PRNewswire/ - Apparel, footwear and travel goods account for 80 percent of Cambodia's total exports. In 2018, combined sales to Europe and to the United States reached 8.5 billion US dollars. This is equivalent to more than one third (approximately 38 percent) of Cambodia's Gross Domestic Product (GDP) - some 7 billion dollars per year. Cambodia is the sixth largest garment supplier and the fourth largest footwear supplier to the US. In the European market, the country stands at number five for shoe production and clothing and exports are rising. We, the signatories of this statement, are among the more than 700,000 men and women who work for the country's largest employment sector. We are most concerned about the prospect of losing our hard-earned livelihood. 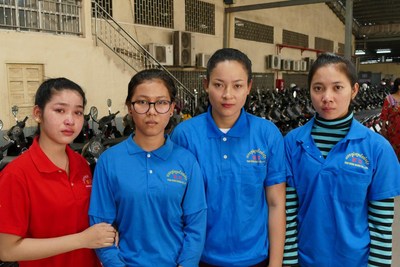 "I am a proud worker and I am grateful to provide for my family" says garment worker Thy Kanhana. "I have skills. I am self-sufficient. Hope for a brighter future guides me every day."

The European Union (EU) has begun a process that may lead to the suspension of its "Everything But Arms" (EBA) trade agreement with Cambodia. The EBA arrangement allows EU members to import products (other than armaments) free of tariffs and quotas.

In a joint letter, the American Apparel & Footwear Association, the Fair Wear Foundation, the European Branded Clothing Alliance, the Federation of the European Sporting Goods Industry and Social Accountability International say the loss of the EBA agreement "will undermine the decades of effort the government has put into developing a successful industry, which has brought about enormous benefits both to the Cambodian economy and the Cambodian people." Unfortunately, some speak with a forked tongue. While they express concern for rights and wages, they seek to keep their costs low and some companies have threatened to take their manufacturing elsewhere.

"For many years, Cambodia has been a pawn in a game of brinkmanship where external players sought to have their cake and it too" says NACC (National Union Alliance Chamber of Cambodia) President Som Aun. "The time has come to deal with the realities of a rapidly changing world."

The National Union Alliance Chamber of Cambodia estimates that the suspension of the EBA tariff system will directly affect the livelihoods of about three million workers and their families. It is estimated that some 43% of garment workers (nearly 225,000 people) and 20% of footwear workers (more than 20,000 people) would be left unemployed. Research suggests and history demonstrates that economic sanctions lead to an increase in poverty - especially among women, minority communities and other marginalized groups.

Beyond "Everything But Arms" in the EU, there is "Everything But Assistance" in the US. Politicians in Washington have introduced a bill, which, if passed into law, would require the US government to review the preferential trade treatment Cambodia receives. The American Chamber of Commerce Cambodia says this measure is counterproductive. "We believe the use of this process as a means for sending a political message, which is unrelated to the spirit of the 1974 Trade Act, will drastically decrease the goodwill and progress this system has created among the ordinary Cambodian citizens."

We live where the shoe meets the ground. Where the sleeve meets the wrist. We work hard. We live hand to mouth, but our lot is improving. Wages have increased by 7% in the last year and we are committed to seeking further adjustments. This, we will do this on our own terms, in our own time, in our own nation.

If you wish to help the working men and women of Cambodia, keep the EBA and preferential trade measures in place.

The men and women of the NACC