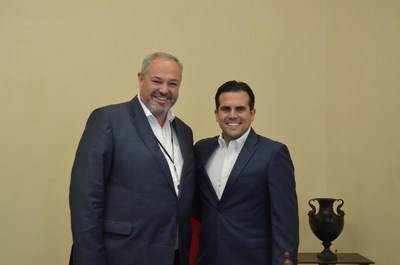 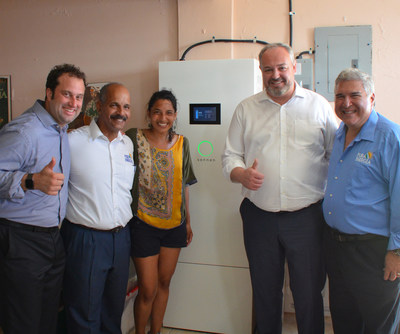 The Foundation's platform will enable the implementation of additional microgrids at sites around Puerto Rico, including schools, community centers and relief shelters. This mission of bringing relief to individuals and entire communities in need, including those affected by energy instability, speaks to sonnen's core principles for achieving clean, reliable and affordable energy for all.

"This trip deeply impacted our entire leadership team and solidified our resolve to help the people of Puerto Rico," said Christoph Ostermann, CEO of sonnen, who was visibly moved by the impact of the microgrids on the local community. "Speaking with government officials, residents and our partners on the ground gave us a 'hands on' understanding of the magnitude of suffering that has occurred since Hurricane Maria. We come away from this trip with as clear a vision as ever before for Puerto Rico and the rest of the world."

Given the devastation across the island and the uncertainty about power restoration timelines, these community microgrids are critical in providing much needed, short-term relief for the residents of Puerto Rico and establishing a resilient infrastructure to withstand future climate disasters. Thus far, sonnen and Pura Energia have donated six Energy Oases, at key community sites across the island, with nine more microgrids planned for the coming weeks. Active microgrids include:

"Puerto Rico is primed for solar energy as we have the sun power and our electricity is one of the most expensive things on the island," said Christine Enid Nieves, spokesperson for Loma La Nina Mariano. "Solar energy would have a huge impact on every Puerto Rican's financial situation, radically shifting the quality of life in the Caribbean. Power lines have been down since Hurricane Maria and grid services are not expected to be available for six to seven months or longer, making solar microgrids an essential element for relief and recovery."

In addition to providing reliable energy for the community, the sonnen and Pura Energia microgrids offer a clean, maintenance-free and quiet alternative to the generators that are polluting the air in Puerto Rico every day, creating a public health concern and damaging the environment.

"sonnen's vision for Puerto Rico, like the established concept of sonnenCommunity in Europe and the United States, is to incorporate both solar and battery storage into new home development, resulting in an integrated approach that truly performs as a Virtual Power Plant (VPP)," said Blake Richetta, sonnen's Senior Vice President and head of the U.S. subsidiary. "Investing in Puerto Rico now will pave the way not only for recovery, but for long-term growth and prosperity. As a country, if we fail to invest in Puerto Rico during this time of need, the result could be disastrous."

sonnen also met with the Department of Economic Development to discuss business investments in Puerto Rico, expanding the Company's distribution channel to the island and creating jobs to aid in their economic recovery.

"The vision of sonnen is aligned with the commitment of Gov. Ricardo Rosello's administration in rebuilding a solid electrical infrastructure based on different alternative energy sources," said Manual Laboy, Secretary of Economic Development and Commerce. "We thank sonnen and its local distributor, Pura Energia, for their efforts and commitment to the people of Puerto Rico, and we hope that this will be the beginning of a long-term relationship between sonnen and Puerto Rico."

At sonnen, we believe clean, affordable, and reliable energy for all is one of the greatest challenges of our time. sonnen is a proven global leader in intelligent energy management solutions that provide greater energy control for residential customers through increased solar self-consumption, reduced peak energy usage and reliable backup power during outages – contributing to a cleaner and more reliable energy future. sonnen has won several awards for its energy innovations, including the 2017 Zayed Future Energy Prize, MIT's Technology Review's 50 Smartest Companies in 2016, Global Cleantech 100 for 2015-2017, Greentech Media's 2016 Grid Edge Award for innovation, and Cleantech's 2015 Company of the Year Award in both Israel and Europe.