SEOUL, South Korea, Feb. 7, 2020 /PRNewswire/ -- Lotte Hotels & Resorts is set to open Lotte Hotel Seattle, its thirty-first branch in the world and only its second in the US, this coming June.

Lotte Hotel Seattle will be located in the F5 Tower, 801 5th Avenue in downtown Seattle, some 20 kilometers away from Tacoma International Airport. The 44-storey hotel will have 189 guest rooms (including 31 suites) ranging from floors 1-16. Notably, the world-renowned French industrial designer Philippe Starck is in charge of the interior design, raising high expectations for an attractive result. 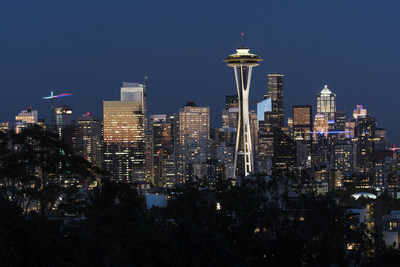 Founded in 1973 and following in the footsteps of Bando Hotel, the first private hotel brand in South Korea, Lotte Hotels & Resorts has gone on to acquire a brand portfolio ranging from SIGNIEL, the company's premium landmark hotel brand; L7, a lifestyle hotel; Lotte City Hotel, a hotel optimized for business travelers; and the Lotte Resort for family travelers, satisfying a wide variety of travelers' needs. Its Korean hospitality service, which puts guests first, has transformed them into South Korea's most iconic hotels.

Backed by its successful operations in the hospitality industry, Lotte Hotels & Resorts has made successful forays into overseas markets. Starting with Lotte Hotel Moscow, established in 2010, the corporation is now a global hotel brand comprising thirty hotels and resorts in major cities in seven countries, including New York in the U.S., Hanoi in Vietnam, and Yangon in Myanmar.

Lotte Hotels & Resorts' first overseas attempt, Lotte Hotel Moscow, won the Conde Nast Traveler Prize, also known as the "Nobel Prize in the travel sector" for two consecutive years in 2012 and 2013. Furthermore, the hotel was named as the Best Hotel in Europe and the Best Hotel Restaurant in Europe at the Villegiature Awards 2014, which came as a nice surprise for the hotel business.

In addition, SIGNIEL Seoul, the first six-star hotel from SIGNIEL brand, has attracted undivided acclaim and attention and is regarded as having opened a new chapter in the history of hospitality industry in South Korea. Just one year after its opening, the premium hotel won the Grand Prix for the Best Hotel in Asia at the Villegiature Awards 2018 and the Best New Luxury Hotel in Asia by Global Traveler, demonstrating excellence of Lotte Hotels and inundating the company with inquiries about future openings from all over the world.

LOTTE New York Palace, taken over by Lotte in 2015 as part of its campaign in the competition against rival global hotel chains, earned fame for its role as "Second White House" during the UN General Assembly held every September. Such an achievement in the fierce competition to attract state leaders led to the assessment that the hotel has established itself firmly in the North American market. Now, the company is expanding with the establishment of another Lotte Hotel in Seattle, the "Emerald City" of the Pacific coast, solidifying its position as a new worldwide hotel chain encompassing both the east and west of the US.

Meanwhile, Lotte Hotel is recruiting new employees ahead of the opening of the Seattle hotel scheduled for June. All of the hotel's departments related to rooms, F&B, marketing, and HR are waiting to welcome talented recruits aspiring to demonstrate their ability as hoteliers in the cluster of headquarters of global corporations.