CULVER CITY, Calif., June 6, 2018 /PRNewswire/ -- Sony Pictures Animation today launched the first full trailer for Spider-Man™: Into the Spider-Verse and confirmed the vocal cast joining Shameik Moore as he takes on the role of Miles Morales. The film will be released in theaters nationwide on December 14, 2018. 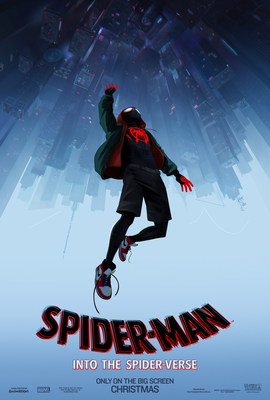 Commenting on the announcement, producers Phil Lord and Christopher Miller said, "We are lucky to have such an amazing cast of funny, genuine creative souls to populate the Spider-verse. They have generous minds and great big hearts. And they have very talented throats. Which is where their delightful voices come from."

Lord and Miller continued: "We can't wait for the world to see Miles Morales on the big screen. He's such a fun and exciting new character, and telling his story through a revolutionary visual style makes for a totally fresh cinematic experience that, if we may say so, is freaking amazing."

The trailer may be viewed at https://youtu.be/g4Hbz2jLxvQ.

Phil Lord and Christopher Miller, the creative minds behind The Lego Movie and 21 Jump Street, bring their unique talents to a fresh vision of a different Spider-Man Universe, with a groundbreaking visual style that's the first of its kind. Spider-Man: Into the Spider-Verse introduces Brooklyn teen Miles Morales, and the limitless possibilities of the Spider-Verse, where more than one can wear the mask. Directed by Bob Persichetti, Peter Ramsey, and Rodney Rothman, the screenplay is by Phil Lord. The film is produced, in association with Marvel, by Avi Arad, Amy Pascal, Phil Lord, Christopher Miller, and Christina Steinberg.

ABOUT SONY PICTURES ANIMATIONSony Pictures Animation produces a variety of animated and family entertainment for audiences around the world.  The studio is following its worldwide comedy hits—the record-breaking monster comedies Hotel Transylvania and Hotel Transylvania 2, the hybrid live action/animated blockbusters The Smurfs and The Smurfs 2, and the mouth-watering Cloudy with a Chance of Meatballs movies—with the fully animated reboot Smurfs: The Lost Village available on digital and Blu-ray now; a surprising and comic take at the secret world inside our phones with The Emoji Movie now on Digital HD, Blu-ray, DVD, and 4K Ultra HD; the inspirational The Star now available on Blu-ray, DVD and Digital. Next will be Genndy Tartakovsky's Hotel Transylvania 3: Summer Vacation in July 2018; from the minds of Chris Miller and Phil Lord will come next the groundbreaking animated feature Spider-Man: Into the Spider-Verse in December 2018, followed by the original feature comedy The Mitchells Vs. The Machines in January 2020; and the animated musical Vivo, featuring original songs by Lin-Manuel Miranda, in November 2020.  The studio, in conjunction with Aardman Animations, has produced two critically acclaimed feature films:  the CG-animated family comedy Arthur Christmas; and the Academy Award® nominated stop-frame animated high-seas adventure, The Pirates! Band of Misfits.  In 2007, Surf's Up also received an Academy Award® nomination for Best Animated Feature Film; a sequel entitled Surf's Up 2: WaveMania is now available on digital and DVD.  The division, whose first feature film Open Season led to a very successful movie franchise including the brand new Open Season: Scared Silly now available on digital, DVD and Blu-ray, was founded in 2002.  Sony Pictures Animation is a division of the Sony Pictures Motion Pictures Group.