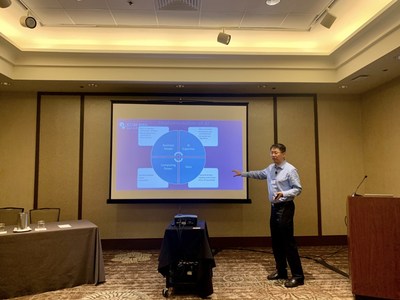 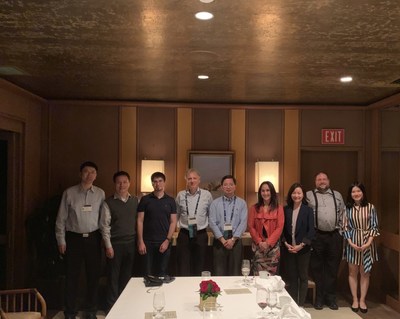 The 33rd Association for Advancement of Artificial Intelligence (AAAI) Conference was rounded off in Hawaii. Founded in 1979, AAAI is one of the major academic organizations in the AI field. With more than 4,000 members all over the world, AAAI provides academic support for 14 AI journals. The annual conference hosed by AAAI is a world-famous important meeting in the AI field.

As the first top conference on AI in 2019, the AAAI Conference was attended by more than 3,000 experts and scholars from all over the world. They shared with one another their latest scientific research achievements in AI technology and the new trend of application to all professions, and discussed next-generation lead-edge technologies and development strategies. Distinguished guests invited to the conference included famous scholar Li Feifei, a professor at Stanford University, Ian Goodfellow, a senior research scientist and the luminary on Generative Adversarial Networks (GANs) at Google, and Yang Qiang, Head of Department of Computer Science and Engineering, Hong Kong University of Science and Technology.

"AI will subvert traditional education with it giving way to individualized teaching."

There are three difficult problems to be urgently solved in the educational industry. The first is serious absence of quality teacher resources; the second is impossibility of carrying out one-to-one individualized teaching in the class-based teaching system; the third is disequilibrium of educational resources caused by geographic restrictions.

Richard pointed out at the conference that AI could solve these difficult problems faced by the traditional educational industry and make it possible to carry out individualized teaching. He said, "First, the AI engine is replacing 80% of the role of one-to-one teachers/tutors; second, AI tutors must be able to help students raise their learning efficiency, improve their performance and enhance their engagement; third, student-centered AI learning is a revolutionary paradigm shift and best able to fully promote the whole program, curriculum design, enrollment, teaching/learning, analysis/test and process improvement cycle."

According to him, Squirrel AI Learning has currently achieved four global innovations in the world: Firstly, super-Nanoscale knowledge point splitting, ten times as fine as actual competitors' method. This makes it possible to accurately learn about every student's grasp of a knowledge point so that they could begin to study at a proper starting point. Secondly, splitting of learning abilities and methods. Squirrel AI Learning has figured out conceptual comprehension ability, physical law application ability, conjecture and observation ability, data-handling capacity, physical quantity estimation capacity and formula deformation application ability, which can be split to develop students' ability to infer other things from one fact. Thirdly, the association probability of unassociated knowledge points. After setting up an association probability, Squirrel AI Learning can raise its test efficiency and learning efficiency to 3-10 times as high as the ALEKS model. Fourthly, adversarial model. This model supports right-and-left mutual fight as AlphaGo Zero does, and through such training, Squirrel AI Learning can optimize the algorithm rapidly, efficiently and significantly to reduce the demand for data in an actual scene.

From Richard's speech, the guests learned about the most cutting-edge development and applications of AI in the education field. With its technological superiority and excellent performance in technology-driven practical applications, the Squirrel AI Learning system has aroused great attention from experts and scholars in the international AI circle.

According to Richard, Squirrel AI Learning is revolutionizing education, and every student should have a one-to-one AI adaptive tutor so that learning would be more effective, efficient and attractive. After the speech, many participants showed their keen interest in Squirrel AI Learning's technological innovation, product implementation and future development, and expressed their expectation of cooperating with Squirrel AI Learning.

After the conference, the Squirrel AI Learning Team attended the AAAI Dinner, where they conducted a further exchange and discussion with many famous experts and scholars from home and abroad, including Ian Goodfellow, a senior research scientist and the luminary on GANs at Google, Zhou Zhihua, Head of School of AI, Nanjing University, and Co-chair of AAAI, Cynthia Breazeal, an associate professor at MIT Media Lab, Pascal van Hentenryck, Academic Chairman of Industrial and Systems Engineering, Georgia Institute of Technology and Co-chair of AAAI, Todd Neller, a professor at the Gettysburg College and Chairman of the EAAI Program Committee, and Andy Li, a professor at Department of Computer Science, University of Florida.

As a number of experts said to the Squirrel AI Learning Team at the dinner, humans have ushered in an era of ABC represented by AI, big data and cloud computing in 2019, and technology will bring about a revolutionary change in education. Therefore, the technological superiority of Squirrel AI Learning system is becoming increasingly obvious.

With strong technical strength and a leading edge, Squirrel AI Learning is already able to effectively solve the problems including the disequilibrium of teacher resources and impossibility of carrying out one-to-one individualized teaching. Moreover, online and offline commercial distribution can successfully break geographical limitations so that more children could enjoy quality educational resources to increase their learning efficiency.

Many forms of education, including increasingly developed after-school tutoring and online education, will be presented in the form of educational data. As Squirrel AI Learning constantly strengthens its predictive power and ability to learn and feed back content effects, the traditional educational mode will be further subverted.

As the first high-tech company in the Asia-Pacific region to use the AI learning technology in the K12 education field, Squirrel AI Learning stays true to its original aspiration and has established a joint laboratory of AI with the Stanford Research Institute (SRI), Chinese Academy of Sciences and CMU respectively in a bid to further explore more possibilities of the application of AI in the adaptive education field. Its scientific research has been included in international top academic conferences, such as CSEDU, AIED and AERA, and its staff has been invited as a keynote speaker to many top summits such as IEEE, ACM, IJCAI, AAAI and KDD. Moreover, it has won many international awards, including the EdTechXEurope Growth Award and the 2018 Greatest Social Contribution Award for AI.

Since 2016, Squirrel AI Learning has set up more than 1,800 offline learning centers in over 300 cities in over 20 provinces in China, and offered help to more than 1 million students. By July 2018, the Squirrel AI Learning by Yixue Group had raised funds of over USD 1 billion with the corporate valuation approaching USD 1.1 billion, becoming a unicorn.

We believe that with the efforts of Squirrel AI Learning by Yixue Group and its peers, ideal education that features "teaching students in accordance with their aptitude" will be turned from an idle dream into a reality so that all children of different nationalities and nations, poor and rich, could have an AI super teacher of their own to enjoy the same quality education.

Beyond all doubt, the Squirrel AI Learning's outstanding achievements are due to the efforts of the professional AI team. The major members of the R&D team are from Knewton, RealizeIT and ALEKS, the world's top three AI learning education providers. Of the members, chief scientist Dr. Cui Wei has a postdoctoral degree in AI obtained from the National University of Ireland. He used to be a core scientist of RealizeIT; chief architect Richard Tong is the technical leader at Knewton, the first AI education provider founded in the US, in the Asia-Pacific region; chief data scientist Dr. Dan Bindman is a co-founder of U.S. AI education magnate ALEKS, and the chief architect responsible for core product algorithm. At the global AI+ adaptive education summit AIAED held in Beijing in November 2018, Prof. Tom Mitchell, the global luminary on machine learning, Dean of School of Computer Science (CMU), Carnegie Mellon University, a fellow at the National Academy of Engineering and American Academy of Arts and Sciences, and a fellow at the American Association for the Advancement of Science (AAAS) and American Association for Artificial Intelligence (AAAI), announced his acceptance of the invitation from Squirrel AI Learning to serve as the Chief AI Officer.