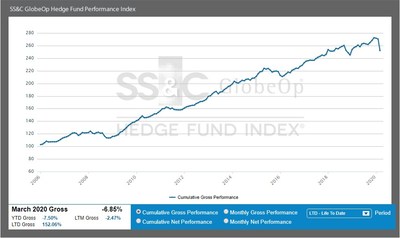 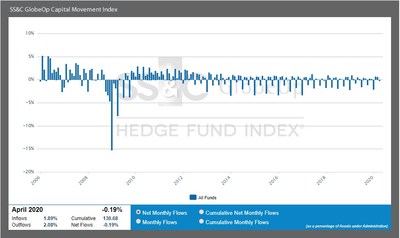 "SS&C GlobeOp's Capital Movement Index for April 2020 was -0.19%, indicating net outflows, though smaller than expected when seasonality is considered. On a comparative basis, the -0.19% reported for April 2020 was favorable relative to the -0.72% reported a year ago and, in fact, was the lowest level of net outflow for the month of April since 2012," said Bill Stone, Chairman and Chief Executive Officer, SS&C Technologies. "This relatively strong result is consistent with other recent data points, but we are too early in the COVID-19 outbreak to predict whether this trend will continue."

While individual fund data is anonymized by aggregation, the SS&C GlobeOp Hedge Fund Index data will be based on the same reconciled fund data that SS&C GlobeOp uses to produce fund net asset values (NAV). Funds acquired through the acquisition of Citi Alternative Investor Services are integrated into the index suite starting with the January 2017 reporting periods. SS&C GlobeOp's total assets under administration on the SS&C GlobeOp platform represent approximately 10% of the estimated assets currently invested in the hedge fund sector. The investment strategies of the funds in the indices span a representative industry sample. Data for middle and back office clients who are not fund administration clients is not included in the Index, but is included in the Company's results announcement figures.