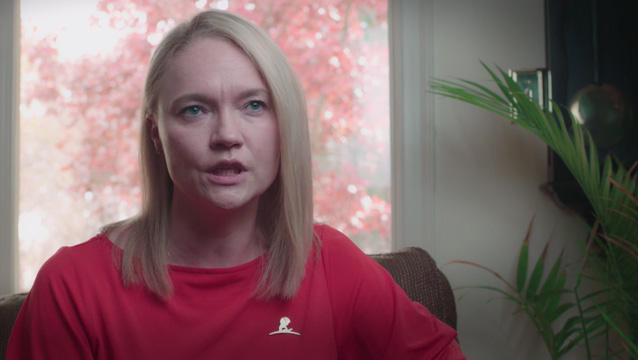 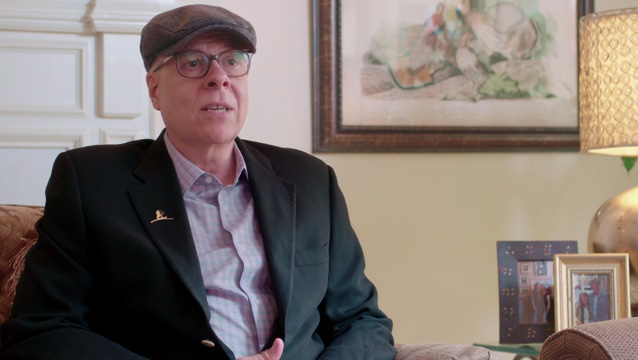 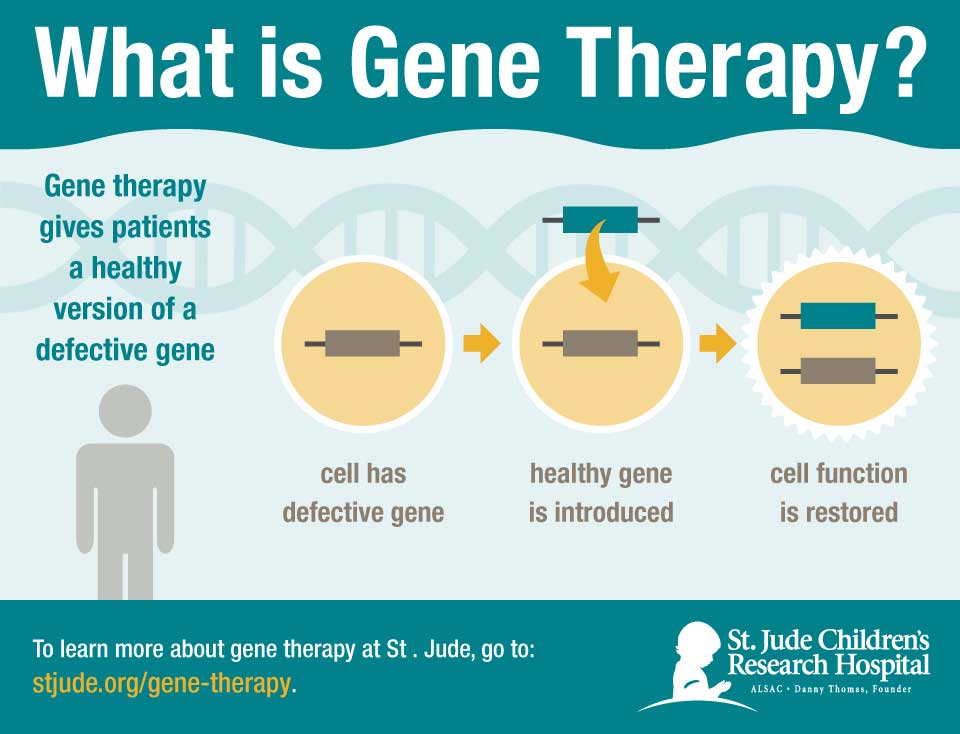 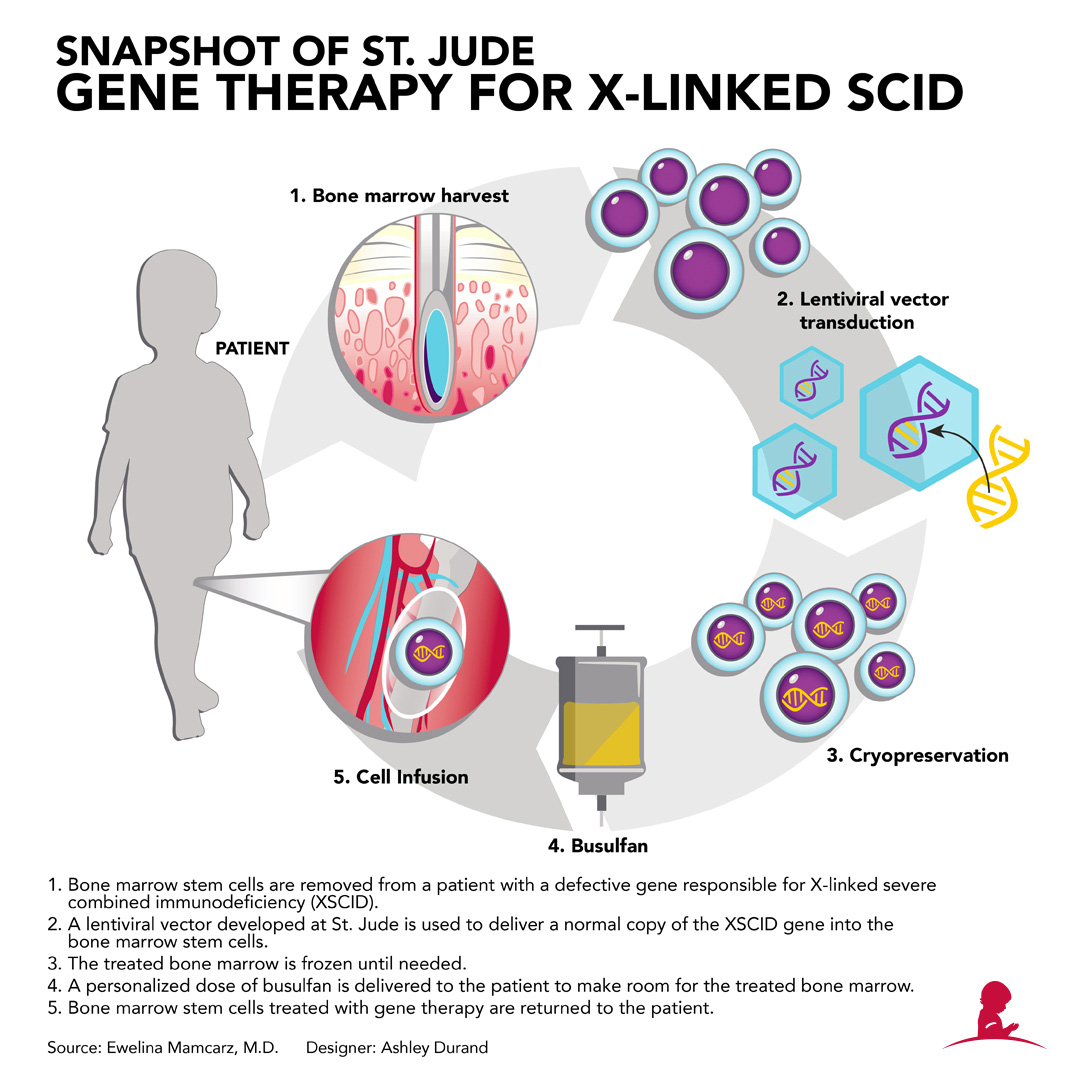 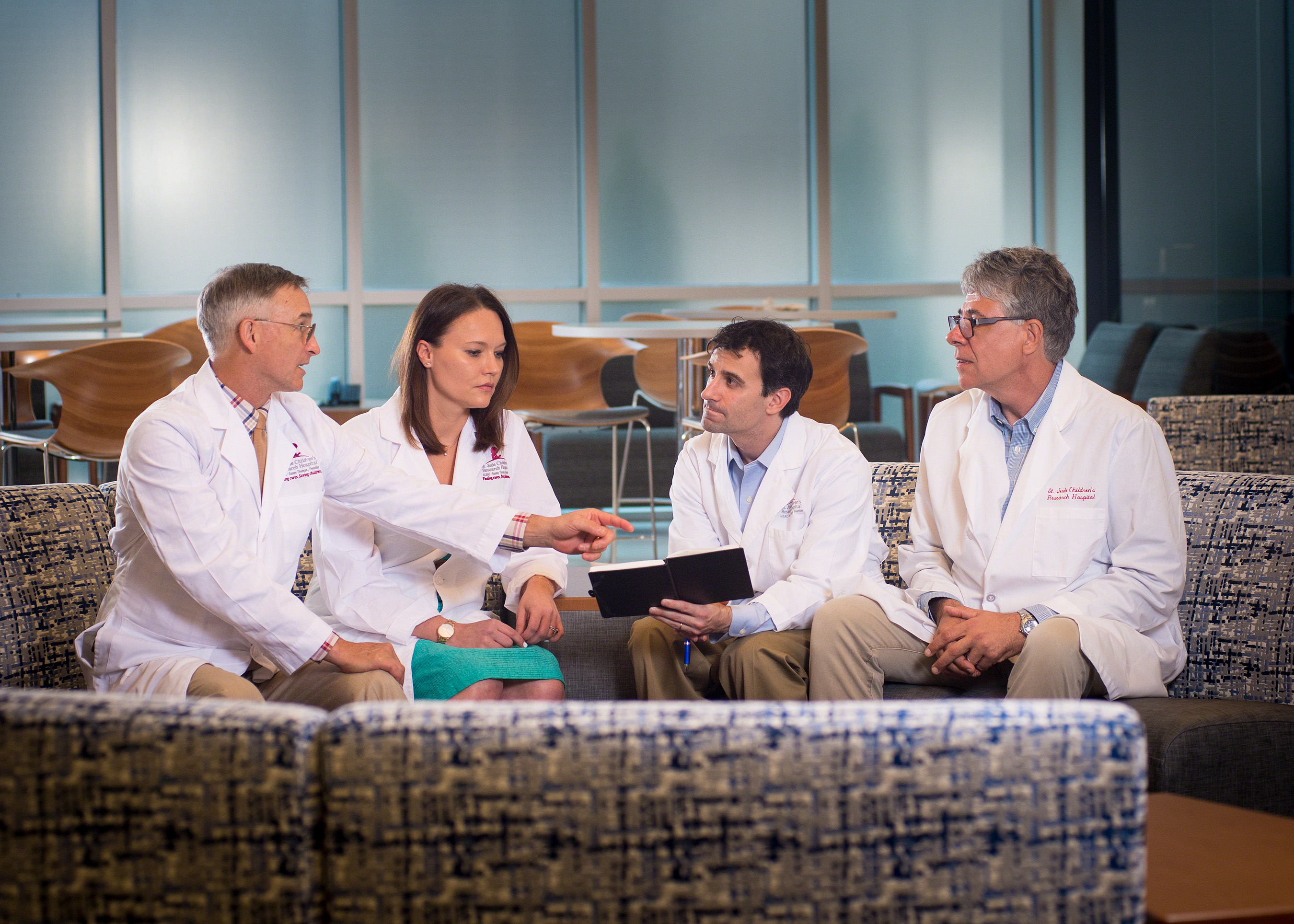 "These results are an exciting early indication that this gene therapy is well tolerated and effective in infants as young as 2 months old with this devastating inherited immune disorder," said Ewelina Mamcarz, M.D., an assistant member of the St. Jude Department of Bone Marrow Transplantation and Cellular Therapy. She spoke at the press conference and will present the findings on Sunday, Dec. 10, at 4:30 p.m.

Immune protection will likely return to the last patient. There is evidence that the seventh patient, who joined the study six weeks ago, now carries the vector in his immune cells. No serious or unexpected treatment-related complications have been reported.

The patients in this study were between the ages of 2 and 13 months and born with a disorder caused by a mutation in the IL2RG gene. The mutation primarily affects boys and leaves them with little or no immune protection. The disorder is also known as "bubble boy" disease, a reference to the measures used to protect patients from infections and other threats. Untreated, individuals usually die of overwhelming infections within months.

Currently, transplantation with a tissue-matched sibling donor is the standard treatment for XSCID. More than 80 percent of XSCID patients, including the infants in this study, do not have matched sibling donors. These patients must rely on unrelated donors or parent donors, who are partial genetic matches. Such transplants are less likely to fully restore immune function and are associated with potentially severe treatment-related complications.

In response, St. Jude researchers have re-engineered a lentivirus to function as a vector to ferry a normal copy of IL2RG into the patients' hematopoietic stem cells. The vector includes novel features to enhance safety and effectiveness. The features include genetic insulators to block activation of genes adjacent to the IL2RG DNA insertion site. The design aims to ensure gene therapy will not lead to leukemia by inadvertently activating an oncogene in the patient's hematopoietic stem cells.

The treatment involves removing the patient's bone marrow and letting the hematopoietic stem cells incubate with the lentiviral vector carrying the normal gene. The stem cells are then processed and returned to the patient via transfusion. Prior to transfusion, patients receive low-dose chemotherapy with the drug busulfan. Unlike the prior studies, the level of busulfan in the patient's blood is pharmacologically targeted to avoid variability in blood levels and improve safety. The chemotherapy is designed to make space in the bone marrow for the gene-corrected hematopoietic stem cells to settle in and start working.

"These early results in infants reinforce hope that gene therapy will prove to be safe and effective at restoring immune function early in life," said Brian Sorrentino, M.D., a member of the St. Jude Department of Hematology, who leads this study with Dr. Mamcarz.

Following gene therapy, levels of T, B and natural killer cells rose to near normal levels in five of the first six patients who enrolled in the study. The vast majority of the immune cells, including 100 percent of the T and natural killer cells, carried the normal gene that was carried in the lentiviral vector. 60 to 80 percent of the B cells also carried the normal gene. Previous gene therapy for XSCID did not lead to such high levels of genetic correction in all immune cell types.

In three of the five patients, 50 percent or more of the hematopoietic stem cells also carried the normal gene. "This suggests these patients will likely enjoy life-long immune protection without exposure to high-dose chemotherapy," Mamcarz said. This level of bone marrow stem cell correction has not been achieved in prior gene therapy studies in XSCID infants.

The sixth patient included in the report received a booster dose of gene-corrected blood stem cells. Laboratory tests indicate T cells, including T cells with the correct gene, have begun to increase. "This was a complex patient," Mamcarz said. The patient was being treated for severe neutropenia and a viral infection when he joined the study. In addition, maternal T cells had engrafted in his bone marrow, complicating efforts to restore his own genetically corrected blood stem cells to his bone marrow.

The patients were treated at St. Jude and Benioff Children's Hospital, the University of California, San Francisco.

St. Jude Children's Research Hospital is leading the way the world understands, treats and cures childhood cancer, sickle cell disease and other life-threatening diseases. It is the only National Cancer Institute-designated Comprehensive Cancer Center devoted solely to children. St. Jude is ranked the No. 1 pediatric cancer hospital by U.S. News & World Report. Treatments developed at St. Jude have helped push the overall childhood cancer survival rate from 20 percent to 80 percent since the hospital opened more than 50 years ago. St. Jude freely shares the breakthroughs it makes, and every child saved at St. Jude means doctors and scientists worldwide can use that knowledge to save thousands more children. Families never receive a bill from St. Jude for treatment, travel, housing and food — because all a family should worry about is helping their child live. To learn more, visit stjude.org or follow St. Jude on social media at @stjuderesearch.