LOS ANGELES, Oct. 12, 2017 /PRNewswire/ -- Starlight Children's Foundation and Star Wars: Force for Change are joining together to bring joy and comfort to children by delivering more than 65,000 new Star Wars-themed Starlight Brave Gowns to kids at hospitals and healthcare facilities across the US. The new gowns replace traditional children's hospital gowns with high-quality, comfortable and brightly colored ones that depict pediatric patients' favorite Star Wars characters. 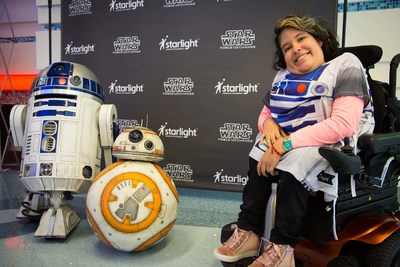 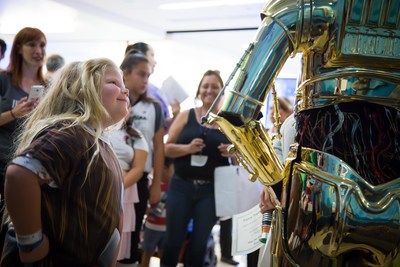 "We hope that these gowns will allow kids in hospitals to draw a bit of strength from the Force," says Lynwen Brennan, General Manager at Lucasfilm. "We are so grateful that Starlight and our generous fans have helped make it possible to pull off such an amazing effort through Force for Change."

The deliveries officially kicked off with a special event at CHOC Children's Hospital on October 5. In celebration of the new Starlight Brave Gowns featuring the iconic characters of Darth Vader, Chewbacca and R2-D2, there were room-to-room visits with Star Wars characters as well as fun activities such as Force training for young Jedi, an interactive reading corner in celebration of "Star Wars Reads" month, gift giveaways and arts and crafts.

"We're excited to see the smiles on thousands of hospitalized kids' faces as they experience the joy and comfort that these new Star Wars-themed Starlight Brave Gowns will bring them," said Chris Helfrich, CEO of Starlight Children's Foundation. "We are honored to have the support of Star Wars: Force for Change to help transform these sick kids into their favorite Star Wars character."

The Walt Disney Company, Lucasfilm's parent organization, is a longtime supporter of children's hospitals and of Starlight Children's Foundation. Visit starlight.org to learn more about Starlight Brave Gowns and donate $25 to give a gown to a hospitalized child in need today.

ABOUT STARLIGHT CHILDREN'S FOUNDATIONStarlight creates moments of joy and comfort for hospitalized kids and their families. For 35 years, Starlight's programs have positively impacted more than 60 million critically, chronically and terminally ill or injured children in the US, Canada, Australia and the UK. With your help, more kids and their families will enjoy Starlight Brave Gowns, Starlight Fun Centers and other Starlight programs at a children's hospital or facility near you. Support Starlight's work by visiting www.starlight.org and by following Starlight on Facebook, Instagram and Twitter.

ABOUT STAR WARS: FORCE FOR CHANGE Star Wars: Force for Change, a charitable initiative from Lucasfilm and Disney, harnesses the strength of Star Wars to empower and improve the lives of children around the world. Since 2014, it was inspired by Star Wars fans, and the countless hours they have dedicated to philanthropy over the past four decades. To date, over $16 million has been raised for charitable causes around the world on behalf of Star Wars: Force for Change. With a bright future ahead, and new Star Wars stories to be told, Force for Change aims to continue collaborating with causes and encouraging others to be forces for change in their own community. To learn more, please visit ForceForChange.com.