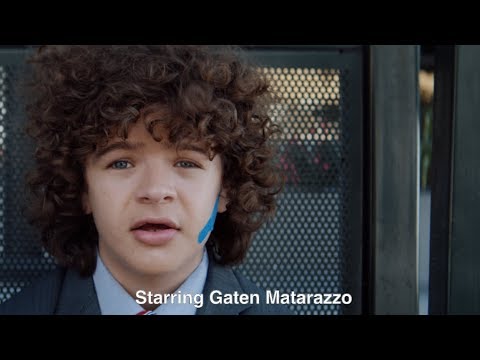 "I had a blast performing with Darren at Elsie Fest last year," said Matarazzo. "That was the first time we had ever met and instantly became buddies. When he sent me the treatment to Computer Games' music video, I was like – rock on! I'm in!"

As for the Criss brothers, having young Matarazzo appear in the video was a no-brainer.

"We're both huge fans of 'Stranger Things,'" said Chuck. "The song shares many of the same 80's electronica influences that can be heard throughout the series."

"It was always going to be Gaten," said Criss. "We wrote the entire treatment around him. Thank God he said yes, because otherwise it probably would have just been me, running around in a silly wig, trying to be Gaten."

The band released their debut album in early March entitled Lost Boys Life EP, which has received astonishing praise. Entertainment Weekly labeled their sound as "a funky blast to the past in the spirit of some of the grooviest '80s superstars," while Teen Vogue described the album as "an indie gem filled with plenty of '80s pop inspiration and a dash of true DIY sensibility." Music from the combined minds of the Criss brothers has been long overdue -- as the two have written, produced, and performed original songs together since high school. After many years of other projects shaping their individual careers, Computer Games has been on the back burner for over a decade. Lost Boys Life EP marks the lifelong goal of a sibling collaboration, and is the first major release from either artist in several years.

By combining the sounds of the 1980s with the brothers' love of contemporary pop production, Lost Boys Life EP explores the journey of trying to maintain boyhood ideologies while navigating the throes of adulthood.

The "Lost Boys Life" music video was written and directed by Mia Elan, produced by Jesy Odio and Ricky Rollins, and edited by Cami Starkman.