In 2014, SFFA sued Harvard under Title VI of the Civil Rights Act alleging the school's admissions policies discriminate against Asian-Americans and give unlawful and unfair preferences to white, Hispanic and black applicants. 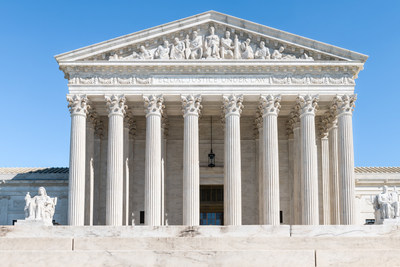 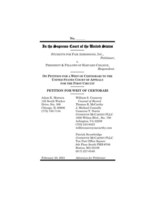 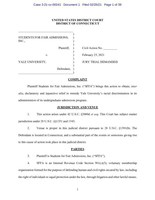 In addition to the illegal quotas, SFFA contends that Harvard balances the percentages of each freshman class by race and has refused to implement meaningful race-neutral admissions policies that would produce a uniquely individualized student body, thus making racial preferences unnecessary.

After losing at the trial court in October, 2019 SFFA appealed the case to the U.S. Court of Appeals for the First Circuit, which affirmed the lower court's ruling on November 12, 2020.

Edward Blum, president of Students for Fair Admissions, said: "After six and one-half years of litigation, the hundreds of Asian-American students who were unfairly and illegally rejected from Harvard because of their race may soon have this lawsuit reviewed by the U.S. Supreme Court. It is our hope that the justices will accept this case and finally end the consideration of race and ethnicity in college admissions."

Blum added, "Americans of all races overwhelmingly disapprove of using race as a factor in college admissions. The nonpartisan Pew Research Center and others have found that 73% of Americans do not approve of colleges treating applicants differently by skin color or ethnic heritage."

Blum said, "Harvard's pursuit of skin-color diversity cannot justify discrimination directed against Asian-Americans or anyone else. Most Americans think it is wrong for individuals to be defined by their race."

Blum concluded, "Racial classifications and preferences in college admissions balkanizes and tribalizes campus life for students and faculty. This case gives the Supreme Court the opportunity to restore the enduring principles of our nation's civil rights laws, which proclaim that a person's race should not be used to help or harm them in their life's endeavors."

In October 2020, SFFA filed a request to intervene in a lawsuit brought by the U.S. Department of Justice, which alleged that Yale's admissions practices discriminated against Asian-American and white applicants. That request was denied by the district court and the lawsuit, United States v. Yale University, was subsequently withdrawn by the Department of Justice on February 3, 2021.

Edward Blum, president of SFFA said, "Yale, Harvard, the University of North Carolina, the University of Texas and many dozens of other highly competitive colleges and universities employ admissions practices that are discriminatory, unnecessary, and unconstitutional. Students applying to undergraduate and post-graduate programs should be judged on their individual talents, character, academic skills, extra-curricular achievements and socio-economic background but not the color of their skin."