SHENZHEN, China, Oct. 29, 2020 /PRNewswire/ -- With the return from summer break, the continuation of COVID-Exit is much more prepared and planned, and elective surgery momentum has resumed. For physicians, safeguarding both patients, as well as themselves, is by far still the priority, especially in the fear of resurgence. 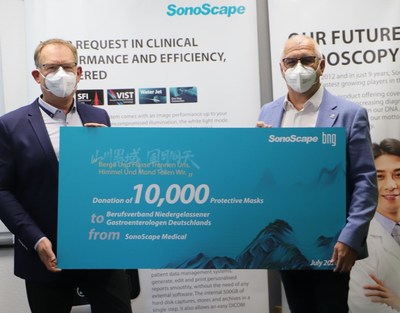 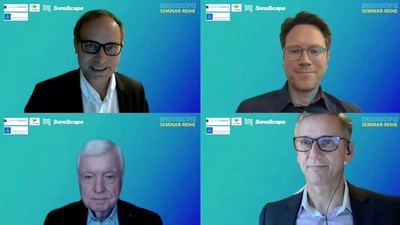 SonoScape Medical Corporation's support extends further into the community. Recently, a batch of 10,000 N95-grade masks arrived in Germany and were donated to BNG ("Berufsverband Niedergelassener Gastroenterologen", Professional Association of Resident Gastroenterologists). Always committed, SonoScape stands side by side patients and doctors, to provide an accessible, top-notch patient care solution, and together to deal with the uncertainty ahead.

The collaboration between SonoScape and physicians in Germany didn't stop here. Since the pandemic, webinars have become the most frequently adopted medium for communications. The rapid and imperative digitalisation trend climbs, now CME points can be accredited through online participation. On two different occasions in the past month, SonoScape supported BNG in delivering live broadcasts in German, unleashing a series of training sessions where participants can also earn credits. The four lecturers were devoted professors, either affiliated to prestigious German universities or senior leadership in BNG.

It is time to act now. The new normal doesn't equal disruption. SonoScape arms itself with an evolving perspective, engages itself in new projects, and helps physicians to re-build their routine.

Founded in 2002 in Shenzhen, China, SonoScape has committed itself to "Caring for life through innovation" by providing ultrasound and endoscopy solutions and delivering first-rate services. At the end of last year, SonoScape combines its two strongest know-how in sonography and endoscopy, and presents its first echoendoscope EG-UR5 to the world. It now has seven R&D centers in Shenzhen, Shanghai, Harbin, Wuhan, Tokyo, Silicon Valley and Seattle.