DALLAS, Dec. 9, 2019 /PRNewswire/ -- Over three quarters of female physicians have experienced income inequality that often starts with their first contracts or through other forms of gender-based discrimination, according to a new survey by Merritt Hawkins, the nation's leading physician search firm and a company of AMN Healthcare (NYSE: AMN). 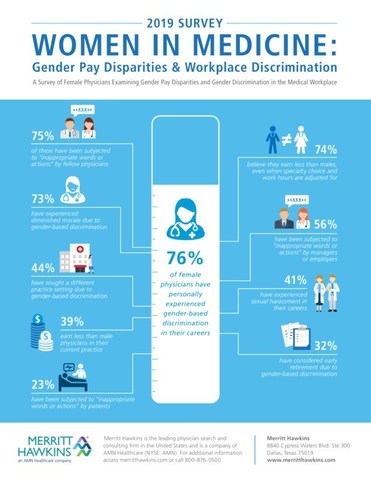 "Women are entering medicine in record numbers and are having a profound impact on the medical profession," said Travis Singleton, executive vice president of Merritt Hawkins. "However, despite these achievements, female physicians continue to be paid less than their male counterparts and face other forms of workplace discrimination."

About 40% of female physicians said they currently earn less than male physicians in their specialty. When asked why, 73% said they received a smaller base salary and/or production bonus than their male colleagues. This suggests that gender-based income disparities in medicine begin at the initial stages of a physician's career, when she is offered a first contract that may pay less than contracts offered to male counterparts.

"If this is the case, female physicians could chase that lost income for their entire careers, losing hundreds of thousands of dollars in the process," Singleton said.

"While employers may judge two candidates for the same job to be equally qualified, they may unconsciously imbue the male candidate with more financial value than the female candidate," Singleton said. "Even though female physicians are just as highly sought after as males, many female physicians believe their equal value is not reflected in their employment contracts."

"Gender discrimination is more than just a challenge for individual doctors," Singleton said.  "When it diminishes the overall supply of physicians, it becomes a matter of public health."

Merritt Hawkins 2019 Survey of Women in Medicine was sent to female physicians nationwide and includes responses from 429 female physicians with a margin of error on subjective factors accounting for gender pay disparities of +/- 4.7% (95% confidence.)  A copy of the survey report may be accessed at www.merritthawkins.com.

About AMN Healthcare AMN Healthcare is the leader and innovator in healthcare workforce solutions and staffing services to healthcare facilities across the nation. The Company provides unparalleled access to the most comprehensive network of quality healthcare professionals through its innovative recruitment strategies and breadth of career opportunities. With insights and expertise, AMN Healthcare helps providers optimize their workforce to successfully reduce complexity, increase efficiency and improve patient outcomes. AMN delivers managed services programs, healthcare executive search solutions, vendor management systems, recruitment process outsourcing, predictive labor analytics, revenue cycle management, credentialing solutions, and other services. AMN Healthcare is committed to fostering and maintaining a diverse team that reflects the communities we serve. Our commitment to the inclusion of many different backgrounds, experiences and perspectives enables our innovation and leadership in the healthcare services industry. For more information about AMN Healthcare, visit www.amnhealthcare.com.