LOS ANGELES, July 10, 2017 /PRNewswire/ -- Penthouse announced the acquisition of OMNI magazine, adding that its upcoming issue is slated for print in late October. This ground-breaking deal symbolizes the company's reinvigoration of a cultural appreciation for science, science fiction, and technological innovation. 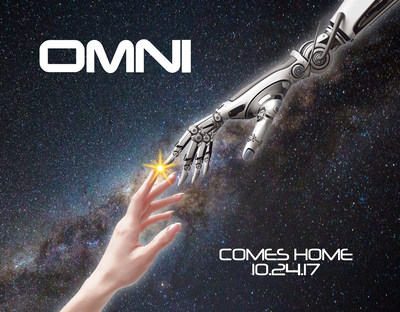 "As Penthouse Global Media enters its second year under new ownership, our driving principle is to put all of the pieces of the brand back together again.  As a result of decades of neglect, much of this company's brilliant legacy was lost…until now," stated Penthouse CEO Kelly Holland. "I am proud to announce that one of those casualties, OMNI—the magazine of science and science fiction, heralded as one of Guccione's most iconic brands—is once again a part of the Penthouse family where it belongs.  Thanks in large part to Pamela Weintraub, one of OMNI's original editors, who had the foresight to bring the brand back to life by re-registering the trademarks and launching a digital site, she, along with many of the original OMNI staff, will deliver the award-winning magazine to newsstands once again."

"The acquisition of OMNI by Penthouse represents a powerful synergy overall," said OMNI's longtime and current editor, Pamela Weintraub. "Both Penthouse and OMNI were created by Bob Guccione and Kathy Keeton as part of their cultural vision for the late 20th century, and since OMNI's founding in 1978, sat side-by-side in the same offices, sharing the same coffee machines and the same editorial support.

"The two major brands of Guccione's media empire, Penthouse and OMNI cast an edgy, iconoclastic gaze on the world, and the open, creative, energetic environment of Penthouse remains the perfect media lab for reinvigorating and reinventing a 21st-century version of OMNI for the Zeitgeist of today."

OMNI's highly anticipated upcoming issue is scheduled to hit newsstands in October, with the intention of addressing the cultural yearning for science and innovation during a time of political uncertainty. The magazine, first published in 1978, was best known for its Q&As with the world's top thought leaders, like Richard Feynman, Candace Pert, and Freeman Dyson, its gonzo-style journalism, literary long-form on the sciences, award-winning fiction, and stunning, futuristic art. OMNI published work by George R.R. Martin, Stephen King, William Gibson, Octavia E. Butler, Ursula K. Le Guin, and renowned artist H.R. Giger. OMNI temporarily halted publication after the death of co-founder Kathy Keeton, but then returned in 2016 with two print issues. It is considered by many to be a pioneer for its time.

Holland added, "As a magazine publisher, I understand the value in acquiring OMNI and believe the timing is perfect to go back into print. In the eighties, OMNI captured the spirit of a culture enthralled with science and its possibilities—one that explored and obsessed over the magic put forth in reality-bending films like Alien andTerminator and Blade Runner, and the technological boon that brought us the space shuttle, flip phones, and flourishing test tube babies.

"Here we stand in that moment again—in an era of 'Alternative Facts' and climate change deniers, evolution skeptics and flat earthers, where the science of wonder is more relevant and urgent than ever. Today scientists and geeks are the rockstars of popular culture.  Science fiction continues to be our collective obsession, and, given Moore's Law, the intersection of fantasy and science is closer than ever."

Weintraub stated, "OMNI was given life by Bob Guccione, but its original creator was his wife, Kathy Keeton, who not only breathed life into the publication in 1978, but also inspired its vision and joyous spirit. With Bob, Kathy believed in science as a transcendent force -- one with the power to help us cure ills, reveal the nature of the universe, and catapult us to the stars."

Likewise, OMNI's content and irreverent tone were informed by Keeton's sense of adventure. The resurgence of the magazine by Penthouse marks a return to its hallmark vision and standards of excellence, including an authentically radical voice reimagined for a new generation of science-minded dreamers.

As a globally recognized leader in adult entertainment and a premiere lifestyle brand, PENTHOUSE has positioned itself as a cutting-edge, trendsetter in the industry. As an international, multimedia entertainment company, Penthouse continues to redefine and expand its iconic appeal and its remarkable place in history.

Made famous worldwide for its fearless approach to sexuality and its unabashed support of those rebelling from the norm, Penthouse has the cache many brands have only dreamed of attaining. As the greatest adult brand in history, it's delivery of sex; style and scandal create loyal fans. It's not only remained as the showcase for the most beautiful women in the world, but its strong roots have allowed the brand to endure as a relevant and influential resource to guide consumers to what they truly want. Visit their official website at PenthouseGlobalMedia.com.