EL CAJON, Calif., April 17, 2019 /PRNewswire/ -- Taylor Guitars, one of the world's leading manufacturers of acoustic guitars, is excited to announce the successful planting of 1,500 West African ebony trees in Cameroon's Congo Basin region in an effort to help preserve the future of the species. The planting, part of Taylor's initiative called The Ebony Project, is the largest known planting of West African ebony -- the impact of which Taylor hopes will be felt for generations. The project also planted an additional 1,500 fruit trees. The planting is part of a larger effort to plant 15,000 ebony trees by the end of 2020. 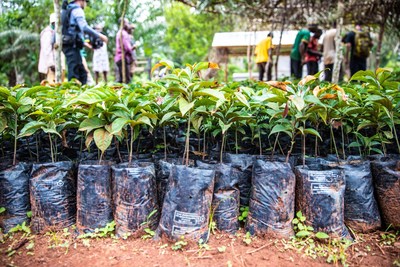 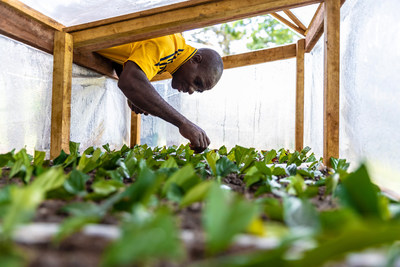 Ebony has long been one of the most relied-upon tonewoods among makers of stringed musical instruments. In Western Africa agricultural land conversion, the bushmeat trade, and logging have significantly reduced ebony populations. The International Union for the Conservation of Nature (IUCN) classifies the species as "Vulnerable."

As a company that relies on West African ebony and other tonewoods from around the world to craft its guitars, Taylor recognizes its responsibility to be an ethical steward of these natural resources. In 2011, Taylor Guitars and Spanish tonewood supplier Madinter International partnered to become the co-owners of Crelicam, an ebony sawmill in Yaoundé, Cameroon, with the goal of creating an ethical, socially responsible value chain for ebony musical instrument components. In 2016 Taylor partnered with the Congo Basin Institute to learn more about ebony ecology. The collaboration took form as The Ebony Project and has since produced groundbreaking research, providing the most accurate estimates of the size and scope of ebony's native range, as well as capturing the first-ever images of insects that pollinate the ebony flower and mammals that distribute the ebony seed. The Ebony Project also led to the development of an innovative community-based agroforestry program, which includes the planting of a number of locally used fruit and medicinal trees along with ebony. The project is fully funded by Bob Taylor, co-founder and president of Taylor Guitars.

"I've dedicated most of my life to building the best guitars I can make," Taylor said. "Taylor is known for its high standards of quality and performance, but now I want to make sure we're also creating a better future for ebony and leaving more than enough resources for generations of instrument builders long after I'm gone. That's why this planting is so meaningful."

The scope of Taylor's innovative work in Cameroon has attracted significant attention: The U.S. State Department recognized Taylor with its prestigious Award for Corporate Excellence (ACE), while interest from leading international institutions such as the World Bank resulted in the signing of a Public-Private-Partnership agreement between Taylor Guitars and Cameroon's Ministry of Environment. The agreement is exploring the feasibility of scaling up the Ebony Project across Southern Cameroon.

Over the course of several weeks this month, members of five different Cameroonian communities collectively planted 1,500 ebony trees and 1,500 fruit trees with assistance from members of the Congo Basin Institute and Taylor Guitars. There was a sense of enthusiasm and accomplishment as teams of villagers of all ages pitched in to help carry the young ebony seedlings into the dense rainforest where they were strategically planted to give them their best chance for growth and survival.

Founded in 1974, Taylor Guitars is one of the world's leading manufacturers of acoustic guitars. Renowned for blending an innovative use of modern technology with a master craftsman's attention to detail, Taylor guitars are widely considered among the best sounding and easiest to play in the world. Many of today's leading musicians make Taylor their guitar of choice, including Jason Mraz, Zac Brown, Shawn Mendes and Taylor Swift, among many others.