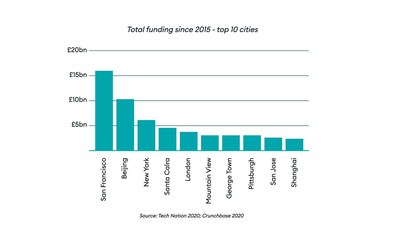 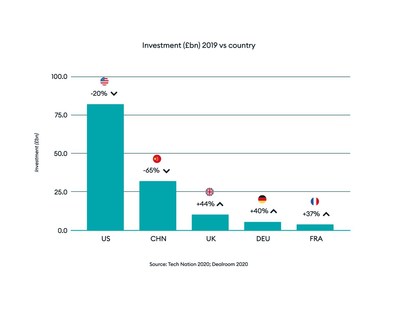 Tech Nation, the growth platform for technology leaders, reveals findings today on the UK and US tech sectors in its annual, Tech Nation 2020 Report.

The US leads the world in Fintech investment at $17.2bn in the US compared to $5.2bn in the UK - Fintech remains the UK's largest tech investment sector with a 100% rise from 2018. 44% of Europe's Fintech unicorns and companies valued between $250m and $800m are based in the UK.

The US accounts for the lion's share of global emerging tech investment, with over £75bn raised since 2015.

10 global cities alone raised 44% of the total emerging tech funding from 2015 to 2019 - 70% of those cities were in the US: San Francisco, New York, Santa Clara, Mountain View, Pittsburgh, San Jose.

The US attracted 56% of all global investment into Artificial Intelligence in the last five years at £32bn, followed by China at £12bn and the UK at £3.2bn. In terms of deal count the US led, followed by the UK and China.

The US had 427 Venture Capital deals completed in 2019 from UK based investors. Index Ventures completed the most with 43 deals which included HealthTech company TruePill located in California which has raised over £27mn and is now an approved NHS online pharmacy in the UK.

"The US continues to lead the world when it comes to VC investment into US tech companies. I am pleased to see the UK performing well, raising considerable amounts of tech investment in 2019, up 44% on 2018, and the sector continuing to transform the UK economy - with 2.9m people now employed in technology in the UK."

"Furthermore, I'm pleased to announce the 28 new companies joining our Future Fifty 8.0 programme, the longest serving and most successful late-stage programme for tech companies. We hope to see these companies become household names in the US market, shining a light for some of the UK's key technology strengths, including Fintech and Healthtech."

Mal Cowley, Co-founder & CEO, Partnerize, commented: "The tech community is very strong across Britain, and in the North East there are so many great companies changing the face of business and commerce. Our company headquartered in Newcastle has been able to build a global footprint by delivering an outstanding product that supports more than 300 brands around the world. From a strong commercial climate to a large pool of well-trained tech employees, our region is a great place to build an innovative global technology business."

Poppy Gustafsson, CEO, Darktrace, commented: "It is fantastic that the UK stands as one of the top 3 countries investing in AI globally. The lifeblood of brilliant technology companies is access to capital and great talent, and Britain has both of these ingredients. Darktrace is a fantastic example of Great British AI proving itself fundamental in solving one of the society's greatest challenges. Thousands of organizations around the world are using this technology to fight back on their behalf to protect their critical data and systems from crippling cyber-attacks."

Dr Lewis Z. Liu, Co-founder & CEO, Eigen Technologies, commented: "There is real momentum right now in the European tech sector. From a global perspective I believe European tech as a whole has come of age in the last couple of quarters. We've seen the likes of Lakestar, Atomico, Balderton, and Northzone raise big funds, showing greater ambition than ever before. European tech, with London leading the way, is now starting to compete with the likes of Silicon Valley and Shenzhen."

Baroness Joanna Shields, CEO, BenevolentAI commented: "Future Fifty was created to support high growth tech companies as they strive to scale up and become market leaders. BenevolentAI could not be more excited or proud to be part of the cohort in 2020. We are a great British business and we have an important and purposeful mission to push the boundaries of technology to understand the underlying cause of diseases and to use AI and machine learning to develop more effective medicines for patients. We are delighted to have Future Fifty by our side for the journey ahead."