SHENZHEN, China, May 22, 2017 /PRNewswire/ -- Tencent Holdings Limited ("Tencent", SEHK: 00700), a leading provider of Internet value-added services in China, said today that its movie-related game on Qzone, trailer on Mobile QQ and augmented reality (AR) technology combined to engage with audiences and fuel excitement about the latest installment of the sports car movie franchise, "The Fast and the Furious," in China in April. 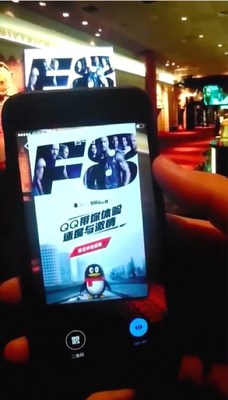 The eighth film in the franchise, released in China in mid-April, topped US$384 million in China revenues by mid-May, according to data from box-office tracker EntGroup. It is Hollywood's highest grossing film ever in China. The film's success during its first few weeks saw China's monthly box office in April grow nearly 57% year-on-year to US$708 million, the largest monthly increase since February last year.

Tencent, which owns China's popular instant-messaging software QQ, supported Universal Pictures with an integrated marketing campaign for the film to connect with the QQ audience in China, including a movie-related game on Qzone, a promotional trailer on Mobile QQ, and an AR animation. The instant messaging tool has more than 860 million active monthly users.

To help promote the film and its technology, mobile phone users can enjoy a Fast-and-Furious themed AR animation when they scan the movie's posters using the mobile QQ AR function. Universal Pictures has placed more than 2,500 posters in China's subways and cinemas. During a racing scene in the movie, a billboard shows the QQ logo, which can also be scanned by the audience to activate the AR animation on their phone.

Besides watching the animation, users can sign up for a car-racing game on Qzone. These integrated activities have proven to be a more engaging and interactive approach to marketing the movie than traditional ways such as movie trailers. According to a survey by Qzone, 71% of users who played the Qzone game had seen or planned to see the movie, compared with 62% among those who didn't. The survey covered 766 users.

In a separate survey of 919 users, 84% of users who watched the promotional trailer on Mobile QQ had watched or planned to watch the movie, compared with 49% among those who didn't.

"As Hollywood studios increasingly target China to boost global revenues, they look for partners that can provide tech-driven marketing solutions to attract the country's huge number of tech-savvy young people who are eager for an engaging experience," said Dan Li, General Manager of Marketing, Social Network Group, Tencent. "With our large user-base in China, consumer behavior insights and strong technical capacity, we can support Hollywood to tap the China market. By doing this, we can also bring more great content to Chinese audiences."

In addition to AR, the movie trailer and movie-related game, Tencent used other tools in its ecosystem to promote the movie, such as a live Q&A with two of the film's stars, Jason Statham and Charlize Theron, via its mobile live-streaming application NOW Live. The Q&A attracted more than two million views in half-an-hour. Meanwhile, users can also buy tickets through QQ Wallet, Tencent's mobile payment platform. https://www.tencent.com/en-us/system.html

Tencent uses technology to enrich the lives of Internet users. Our social products Weixin and QQ link our users to a rich digital content catalogue including games, video, music and books. Our proprietary targeting technology helps advertisers reach out to hundreds of millions of consumers in China. Our infrastructure services including payment, security, cloud and artificial intelligence create differentiated offerings and support our partners' business growth. Tencent invests heavily in people and innovation, enabling us to evolve with the Internet.

Tencent was founded in Shenzhen, China, in 1998. Shares of Tencent (00700.hk) are traded on the Main Board of the Stock Exchange of Hong Kong.