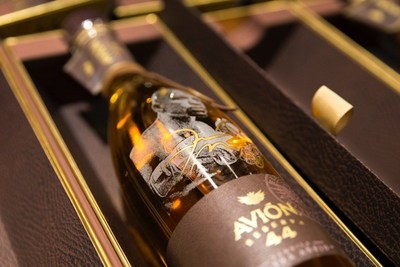 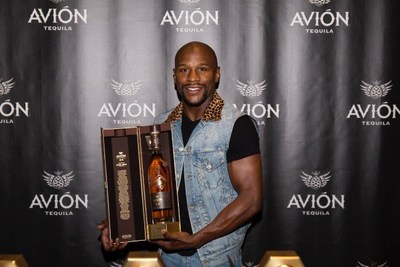 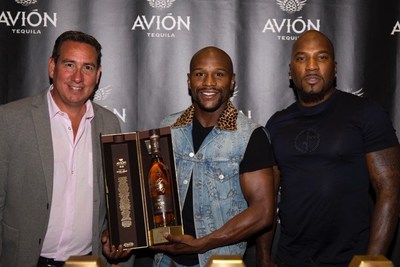 Floyd Mayweather Jr. remains undefeated throughout his professional boxing career and is a five-division world champion, having won fifteen world titles and the lineal championship in four different weight classes. Considered to be among the best professional boxers in the world, Floyd Mayweather Jr. will go head to head with MMA UFC fighter Conor McGregor this upcoming Saturday August 26th.

Giving a nod to the best in world-class boxing, Tequila Avión has worked with Floyd Mayweather Jr. and his team to create the exclusive commemorative bottles, of which only 150 are for sale worldwide.  Each custom bottle features an etched likeness of Mayweather and have been hand-signed by Floyd Mayweather Jr.  This collector's edition of Avión Reserva 44 Extra Añejo Tequila is composed of fire polished crystal and comes encased in a gift box with a certificate of authenticity.  Avión Reserva 44 is hand bottled in extremely limited batches. It's distinctive character of Avión agave with hints of warm vanilla, ripe luscious fruits with a touch of spice have won it critical acclaim.

Conversations with Tequila Avión began when Floyd Mayweather Jr. and his team approached Avión Founder, Ken Austin regarding their shared vision. Both Mayweather and Tequila Avión share a love of their craft.  Ken Austin, Founder and Chairman of Tequila Avión, stated "The team at Tequila Avión joins in the belief of never cutting corners and putting the work in. Much like Floyd Mayweather Jr., our brand believes in the pressure of perfection, which is shown in the unwavering commitment to our tequila. We are looking forward to a great fight-night and thank Floyd for selecting Tequila Avión to take part in this historical moment in time for boxing and MMA fans around the world."

Floyd Mayweather Jr. joins in Tequila Avión's ambition of excellence. Commenting on the commemorative bottle, Mayweather shared "Creating this bespoke bottle with Ken and Tequila Avión was a given. Avión epitomizes the highest in quality, which is all I accept in life.  As a world-class athlete, I have spent my life training to be the best, and as such I'd only work with and associate with the best tequila in the world to have my image and personal signature."

The 150 commemorative bottles of Avión Reserva 44 Extra Añejo Tequila will retail for approximately $1,500 each and will be available on the Las Vegas strip at Total Wine & More while supplies last. (Orders will also be accepted by visiting TotalWine.com or call store at 702.614.4001)