WASHINGTON, May 14, 2018 /PRNewswire/ -- For the first time in the competition's 35-year history, a teen Mathlete® won the Raytheon MATHCOUNTS National Championship for the second year in a row. Luke Robitaille, a 14-year-old homeschooled eighth grader from Euless, Texas, is the 2018 Raytheon MATHCOUNTS National Champion, following an intense, elite competition at the Renaissance Washington, D.C. Downtown Hotel. 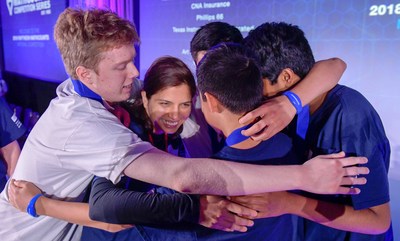 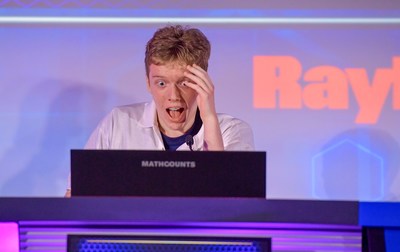 Luke Robitaille won the final round of the 2018 Raytheon MATHCOUNTS National Competition by answering the question: "The first three terms of an infinite arithmetic sequence are 3.46, 2.47 and 1.48, in that order. What is the first integer term in this sequence?" during the Countdown Round, in which the top 12 Mathletes® competed in head-to-head matchups. He gave the correct answer, -50, in 14.55 seconds. As National Champion, Luke Robitaille is the recipient of the $20,000 Donald G. Weinert College Scholarship and a trip to U.S. Space Camp.

For the second year in a row, Luke Robitaille was the top-ranked competitor going into the Countdown Round, based on his written test scores. Robitaille competed head-to-head again this year against Texas teammate eighth grader Andrew Cai, age 14, of Quail Valley Middle School in Sugar Land, Texas, who was the Countdown Round Runner-Up. The semifinalists were: Daniel Yuan an 8th grader from North Potomac, Md., and Daniel Xia, an 8th grader from Basking Ridge, N.J.

This is the tenth year that Raytheon Company (NYSE: RTN) has served as title sponsor as part of its global commitment to science, technology, engineering and math education. To continue developing the next generation of technology innovators and math professionals, Raytheon will extend its sponsorship of this elite Mathlete competition until 2025.

"This competition plays a vital role in getting middle school students excited about math, and interested in becoming the next generation of scientists and engineers," said Raytheon Chairman and CEO Tom Kennedy. "They are our future. The passion, enthusiasm and mastery demonstrated by all these competitors is truly inspiring. This is why Raytheon is proud to continue sponsoring the MATHCOUNTS National Competition through 2025 – because we believe in these young people, and we look forward to watching them solve the challenges of tomorrow, such as those in robotics, artificial intelligence and cybersecurity."

Luke Robitaille was among 224 competitors from all 50 states, plus U.S. territories and schools that serve the U.S. State and Defense departments who traveled to the nation's capital after earning a spot in the national competition. More than 100,000 students participated in the local and state competitions that led to this weekend's event. This year's competition was the 35th in the MATHCOUNTS Foundation's history.

"Our national competitors prove just how far students can go when they have the right opportunities in math and put in the effort to make the most of them," said Kristen Chandler, executive director of MATHCOUNTS. "Luke's success was the result of talent and tremendous hard work, and we are thrilled he is our first two-time National Champion."

About MATHCOUNTS FoundationMATHCOUNTS is a nonprofit organization that strives to engage middle school students of all ability and interest levels in fun, challenging math programs, in order to expand their academic and professional opportunities. Middle school students exist at a critical juncture in which their love for mathematics must be nurtured, or their fear of mathematics must be overcome. For more than 30 years, MATHCOUNTS has provided free, high-quality resources to educators and enriching, extracurricular opportunities to students to lay a foundation for future success. Materials and information are available at www.mathcounts.org.

About RaytheonRaytheon Company, with 2017 sales of $25 billion and 64,000 employees, is a technology and innovation leader specializing in defense, civil government and cybersecurity solutions. With a history of innovation spanning 96 years, Raytheon provides state-of-the-art electronics, mission systems integration, C5I™ products and services, sensing, effects, and mission support for customers in more than 80 countries. Raytheon is headquartered in Waltham, Massachusetts. Follow us on Twitter.