NEW YORK, Sept. 23, 2019 /PRNewswire/ -- The Africa Center, a leading non-profit institution focused on the intersection of African policy, business, and culture, today announced a transformative $20 million donation by the Aliko Dangote Foundation to advance and accelerate the Center's capital campaign, further activate its public spaces and programming, and support ongoing operations. In recognition of this historic donation – one of the largest known donations of its kind by an African philanthropist to a U.S. non-profit organization -- the Center renamed its venue "The Africa Center at Aliko Dangote Hall" at a ceremony during the Future Africa Forum. 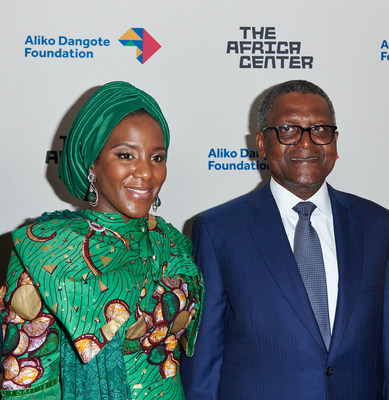 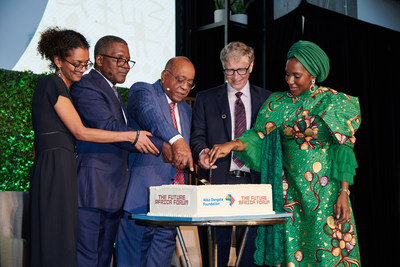 The donation by the Aliko Dangote Foundation is focused on supporting The Africa Center's work encompassing policy, business, and culture to transform global understanding of the continent by promoting partnership and collaboration between Africa and the United States, and to help change narratives about Africa's economic and cultural significance today and into the future. Mr. Dangote, founder and president/chief executive of Dangote Industries Limited, the largest conglomerate in West Africa, is one of the world's most successful business leaders. A dedicated philanthropist, he made an initial endowment of $1.25 billion to the Aliko Dangote Foundation in March 2014, enabling it to scale up its work in health and nutrition, education, and economic empowerment.

A new $5 million grant from the Bill & Melinda Gates Foundation was also announced at the Future Africa Forum. The Gates Foundation grant is directed to the Center's capital campaign and for the development of its policy initiatives.

Other foundations, corporations, and individuals that provided leadership support for the capital campaign, including the Mo Ibrahim Family, who have given over $7 million to The Africa Center in recent years, and the New York City Department of Cultural Affairs, were also recognized at today's event, which marked the conclusion of the second phase of construction.

"The Africa Center is showcasing Africa in a contemporary, multifaceted manner as a center of innovation, growth, and limitless potential, which makes this project extremely important and worthy of support through my foundation," said Mr. Dangote. "There is an opportunity to establish new narratives about Africa today, with its unrivaled mix of people, ideas, and resources, which are both its greatest strength and the basis for its tremendous, untapped promise. The connections The Africa Center will make between Africa, the United States, and the rest of the world, including members of the Diaspora, are more critical now than ever before."

"Congratulations to The Africa Center on the announcement of this extraordinary gift from the Aliko Dangote Foundation and the conclusion of another phase of construction, marking the latest milestones for this important addition to NYC's cultural landscape," said Cultural Affairs Commissioner Tom Finkelpearl. "The City is pleased to have contributed over $4 million in public capital support for the Center, which is already offering vibrant programming that solidifies NYC's connections with contemporary Africa and provides a new anchor for Museum Mile at the northern end of Central Park."

Halima Aliko Dangote, Group Executive Director of Dangote Industries and president of The Africa Center, who is leading the Center's successful capital campaign, said: "The Africa Center is an important gateway to understanding contemporary and future Africa and Africans. The Capital Campaign has received remarkable leadership support from institutions and individuals that recognize the role it has to play in building bridges between cultures in a globalized world village. That support has enabled us to complete the first two public spaces and activate them with programming that has already proven to be compelling and popular among our local community. We are building on this momentum by reaching out to additional business leaders and global philanthropists and asking them to invest in The Africa Center's mission."

"The Africa Center is proud to have the support of the Aliko Dangote Foundation and the Dangote Family, whose vision for the future of the African continent is perfectly aligned with The Africa Center's mission to advance African policy, business, and culture of the 21st century," said Dr. Uzodinma Iweala, Chief Executive Officer of The Africa Center. "We are profoundly grateful to the Aliko Dangote Foundation, the Mo Ibrahim family, the Bill & Melinda Gates Foundation, and all those whose commitment is enabling us to realize our plans to create a vibrant and essential center of ideas and action focused on the 54 nations and people of Africa and its Diaspora."

The Africa Center is transforming the world's understanding of Africa, its Diaspora and the role of people of African descent in the world. Serving as the hub for the exchange of ideas around culture, business, and policy related to the continent, and in the spirit of collaboration and engagement with individuals and institutions who share the Center's values, The Africa Center inspires enthusiasm, and advances thought and action around Africa's global influence and impact on our collective and shared futures. This mission is guided by a leadership team that includes Board President Halima Aliko Dangote, Board Co-Chairs Hadeel Ibrahim and Chelsea Clinton, and CEO Uzodinma Iweala.

The Africa Center's physical presence on Fifth Avenue at the intersection of Harlem and the Museum Mile is a location that embodies the dynamism and diversity of Africa and its Diaspora in the heart of New York City. Caples Jefferson Architects (CJA) was engaged in 2016 to design the facility, responding to The Africa Center's ethos as an experimental, inclusive institution fostering business, policy, and cultural exchange locally and globally. To serve the Center's programming, the New York-based firm designed a receptive, flexible, and expansive structure—its Museum Mile location in East Harlem contextualized architecturally and programmatically.

Since launching its public programming in January 2019, The Africa Center has already attracted and engaged thousands of visitors in a series of inaugural performances, installations, talks, readings, book signings, and film screenings. Teranga, a fast-casual restaurant located on the Center's first floor that highlights food from the continent and hosts tastings and cooking demonstrations aligned with the Center's programming and mission, has received critical acclaim.

The Future Africa Forum, this year's signature policy and business event of The Africa Center in partnership with the Aliko Dangote Foundation, is a platform for sharing new ideas and strategies that challenge the structures and systems that support one-dimensional narratives of the continent, and that inform policies and ultimately affect the lives of African people, those of African descent, and the future of Africa. Today's event included a fireside chat with Aliko Dangote, Mo Ibrahim, and Bill Gates.