KANSAS CITY, Mo., Dec. 11, 2017 /PRNewswire/ -- Just four months after the celebration of Two Light Luxury Apartments' topping out, The Cordish Companies and Kansas City Power & Light District proudly announce construction will be completed a month earlier than anticipated, allowing residents to move into their new luxury apartment homes as early as May 4, 2018. 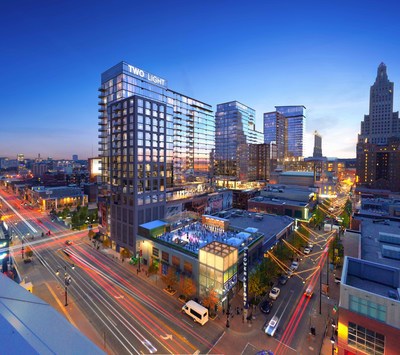 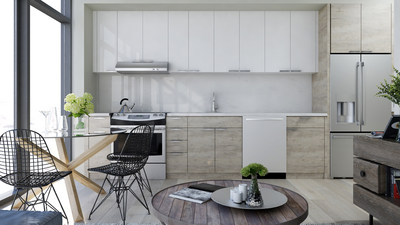 When it opens, Two Light will add 24/7 energy and 400+ residents to its community at the corner of Grand Boulevard and Truman Road, connecting the vibrancy of the Power & Light District with the eclectic energy of the Crossroads Arts District.

Two Light is the second of four planned high-rise apartment buildings to be built by The Cordish Companies within the nine-block perimeter of the Power & Light District. The 25-story One Light Luxury Apartments opened in November 2015.

"We can't wait for Kansas City to experience Two Light," said Nick Benjamin, Executive Director of the Kansas City Power & Light District and Vice President of Multifamily Development for The Cordish Companies. "Like its sister property, One Light, Two Light will raise the bar for multifamily living in the Midwest and will be a great milestone in the continued growth and revitalization of downtown Kansas City."

The expedited opening of Two Light Luxury Apartments has been aggressively sought by locally owned general contractor, JE Dunn, and their team of quality subcontractors.

"The early opening announcement could not have been possible without the hard work and coordination from both our design and construction teams throughout the project," said Barbara Allen, Construction Project Executive for The Cordish Companies. "There is still work to be done, but we will continue to meet and exceed our schedule so that our residents are able to move in May 4th and take full advantage of all the exciting events happening this summer."

The exterior façade and many units are already near completion in the $120 million, 296-unit tower which was originally scheduled to open in June 2018.  The finishes and final details in the remaining units and incredible amenity spaces will continue through the final months.

"The Cordish Companies had a bold vision for Downtown Kansas City, and it's been an honor and privilege to work with everyone there to make it come to life. I would like to thank our trade partners and the men and women who have been dedicated to working safely and completing a quality project ahead of schedule," said Dirk Schafer, Midwest President, JE Dunn Construction.

Two Light's key construction and development milestones in recent months have fueled additional interest in leasing and general excitement about the project and include:

"The anticipation of our residents and the downtown community overall has been exhilarating," said Marnie Sauls, Director of Residential Management for The Cordish Companies. "For residents who have already signed leases, we send them pictures and video of the progress of their new home. They get to see the walls going up, the incredible views as their balconies are installed, the finishes being added and more. There is nothing greater than seeing and hearing our residents' excitement for move-in day, and now that we get to tell them they will be able to move in earlier, we couldn't be more excited."

Two Light will join One Light as the second new construction high-rise apartment building in the last 50 years in downtown Kansas City. The 24-story tower features a seven-story parking garage with 436 spaces, plus 17 floors of apartment homes. Additionally, the first floor will include 15,000 square feet of office space and 3,100 square feet of retail space occupied by Power Life Yoga Barre Fitness.

Two Light will feature more than 16,000 square feet of amenity space that rivals that of any luxury apartment or condo building anywhere in the United States including:

Tours of a model apartment of Two Light can be scheduled by visiting the Two Light Leasing Center at 1251 Main Street, emailing [email protected] or by calling 816-472-1444. Beginning in January, Two Light will offer hard hat tours of a finished model apartment home inside the building.

About the Kansas City Power & Light DistrictThe Kansas City Power & Light District is a vibrant eight-block neighborhood in the heart of downtown Kansas City that is redefining the City from its skyline to its sidewalks. The District links together the renovated Bartle Hall Convention Center, the new Sprint Center, offices, hotels, entertainment, cultural destinations and residential developments.  The combination of entertainment, shopping, nightlife and residential with the District's imaginative and innovative design, has created an intriguing 24/7 neighborhood. For more information, visit www.powerandlightdistrict.com or www.facebook.com/KCPowerLightDistrict.